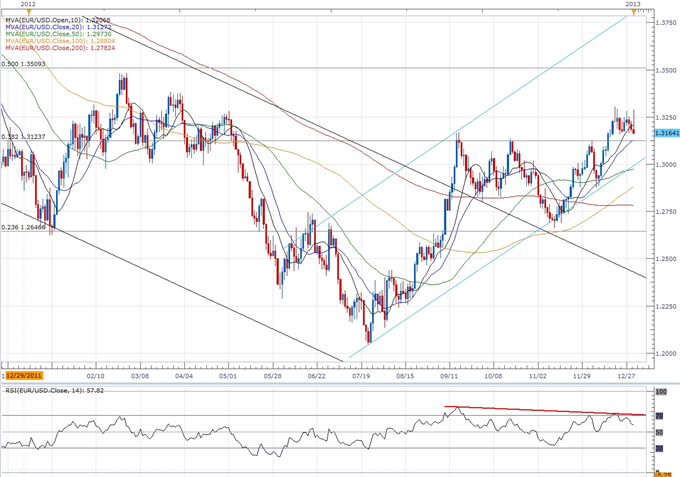 Unemployment in Germany is expected to increase another 10K during December and the persistent weakness in the labor market may weaken the EURUSD as the euro-area faces a deepening recession. Indeed, the weakening outlook for Europe’s largest economy may prompt the European Central Bank (ECB)to embark on its easing cycle throughout 2013, and the Governing Council looks poised to push the benchmark interest rate to a fresh record-low as the central bank sees a growing risk of undershooting the 2% target for inflation.

The ongoing rebound in business sentiment paired with the expansion in foreign trade may encourages businesses to expand their labor force, and a positive development may prop up the single currency as it dampens speculation for additional monetary support. However, the drop in business outputs along with the slowdown in private sector consumption may continue to drag on the labor market, and another rise in unemployment is likely to dampen the appeal of the single currency as it fuels bets for lower borrowing costs.

The EURUSD certainly appears to have carved a near-term top around the 1.3300 figure as the relative strength index continues to come off of overbought territory, and another rise in German unemployment may trigger a more meaningful move to the downside as it fuels bets for a rate cut. However, a positive development may help the euro-dollar to preserve the range-bound price action carried over from the end of 2012, and we may see the pair continue to track sideways ahead of the ECB interest rate decision on January 10 as market participants weigh the outlook for monetary policy.

Expectations for a ninth consecutive rise in unemployment certainly instills a bearish outlook for the single currency, but a positive print may pave the way for a long Euro trade should the report curb fears of a prolonged recession. Therefore, if the labor market improves in December, we will need a green, five-minute candle following the release to generate a long entry on two-lots of EURUSD. Once these conditions are fulfilled, we will set the initial stop at the nearby swing low or a reasonable distance from the entry, and this risk will establish our first objective. The second target will be based on discretion, and we will move the stop on the second lot to cost once the first trade hits its mark in an effort to protect our gains.

In contrast, the ongoing slack in the real economy paired with the slowdown in private consumption may encourage businesses to keep a lid on hiring, and a dismal report may spark a selloff in the exchange rate as it dampens the outlook for growth. As a result, if unemployment rises 10K or greater, we will carry out the same strategy for a short euro-dollar trade as the long position laid out about, just in the opposite direction.

Europe’s largest economy shed another 5K jobs in November following a revised 19K contraction the month prior, while the jobless rate held steady at 6.9% for the second month. The better-than-expected print helped to prop up the Euro, with the EURUSD climbing back above the 1.2975 figure, but we saw the single currency consolidate throughout the North American trade as the pair closed at 1.2976.