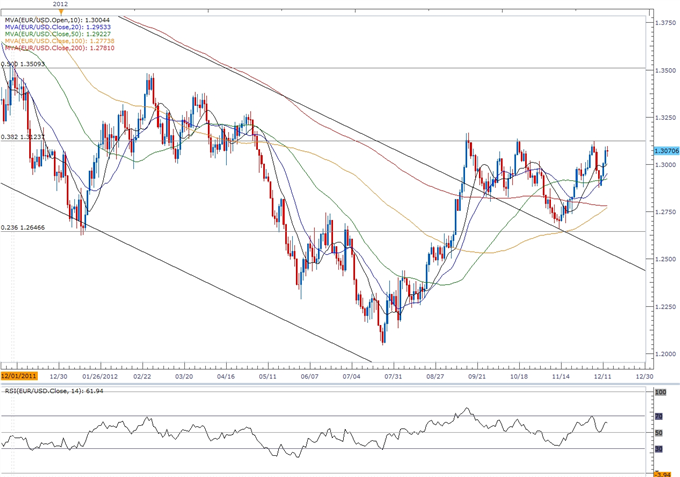 The headline reading for euro-area inflation is expected to hold steady at 2.2% in November and a positive development may spark a bullish reaction in the single currency as it dampens the prospects for additional monetary support. However, as the European Central Bank (ECB) sees price growth falling below the 2% target in 2013, the deepening recession may continue to threaten price stability, and we may see the Governing Council continue to embark on its easing cycle in the following year as the outlook for growth and inflation deteriorates.

The rebound in confidence along with the stickiness in producer prices may produce a higher-than-expected CPI print, and an uptick in price growth may increase the appeal of the single currency as it dampens speculation for another rate cut in 2013. However, record-high employment paired with the weakness in private sector consumption may drag on consumer prices, and the ECB may continue to target the benchmark interest rate in the months ahead as the central bank maintains its one and only mandate to ensure price stability.

As the EURUSD makes another failed attempt to push back above the 38.2% Fibonacci retracement from the 2009 high to the 2010 low around 1.3120, the pair appears to be carving a triple-top ahead of the New Year, and the reversal pattern may continue to take shape in the days ahead as the fundamental outlook for the euro-area turns increasingly bleak. In turn, the euro-dollar looks poised to fall back towards the 23.6% Fib around 1.2640-50, and the single currency remains poised to face additional headwinds over the near to medium-term as the region faces a deepening recession.

Expectations for sticky price growth may increase the appeal of the single currency as it limit’s the scope of seeing another ECB rate cut, and a positive print may pave the way for a long Euro trade as market participants weigh the outlook for monetary policy. Therefore, if consumer prices increase at an annualized rate of 2.2% or greater, we will need to see a green, five minute candle following the release to establish a buy entry on two-lots of EURUSD. Once these conditions are met, we will set the initial stop at the nearby swing low or a reasonable distance from the entry, and this risk will generate our first target. The second objective will be based on discretion, and we will move the stop on the second lot to breakeven once the first trade reaches its mark in order to preserve our profits.

On the other hand, the deepening economic downturn in the euro-area may continue to drag on price growth, and a decline in the CPI may weaken the single currency as it fuels speculation for another ECB rate cut. As a result, if the headline reading for inflation falls short of market expectations, we will carry out the same strategy for a short euro-dollar trade as the long position laid out above, just in reverse.

Euro-Zone consumer prices increased 2.5% in October after expanding a revised 2.6% the month prior, while the core rate of inflation held at 1.5% for the third consecutive month. Indeed, easing price pressures in the euro-area sparked a small decline in the exchange rate, with the EURUSD falling back towards the 1.2750 region, but we saw the single currency regain its footing during the North American trade as the pair ended the day at 1.2779.