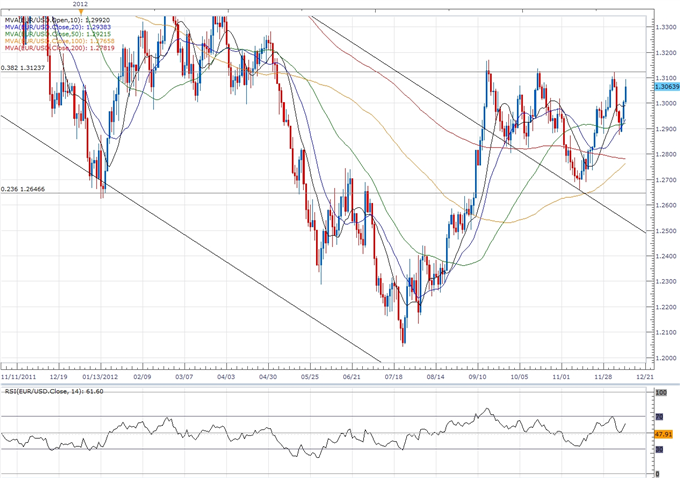 U.S. retail sales are projected to increase 0.5% in November following the 0.3% contraction the month prior and the rebound in private sector consumption should increase the appeal of the dollar as it remains one of the leading drivers of growth. As the Federal Reserve takes additional steps to encourage a stronger recovery, the highly accommodative policy stance held by the central bank may foster a larger-than-expected rise in household spending as economic activity gradually gathers pace.

The ongoing improvement in the labor market along with the expansion in consumer credit should help to fuel private sector consumption, and a marked rebound in retail sales may prop up the USD as it dampens the scope of seeing additional monetary support. However, subdued wage growth paired with the recent decline on confidence may drag on household spending, and a dismal sales report may weigh on the greenback as the Fed retains a relatively dovish tone for monetary policy.

Despite the expansion in the Fed’s open-ended asset purchase program, the EURUSD appears to have make another failed move at the 38.2% Fibonacci retracement from the 2009 high to the 2010 low around 1.3120, and the pair looks poised for a short-term reversal as it appears to be carving out a lower top in December. Should the U.S. retail sales report sap bets for more easing, the development may trigger a move back towards the 23.6% Fib (1.2640-50), and the pair may continue to give back the advance from earlier this year as the fundamental outlook for the world’s largest economy improves.

Expectations for a rebound in household consumption certainly casts a bullish outlook for the greenback, and a marked pickup in retail sales may set the stage for a long U.S. dollar trade should the data dampen speculation for additional monetary support. Therefore, if spending increases 0.5% or greater, we will need a red, five-minute candle following the release to establish a sell entry on two-lots of EURUSD. Once these conditions are met, we will set the initial stop at the nearby swing high or a reasonable distance from the entry, and this risk will generate our first target. The second objective will be based on discretion, and we will move the stop on the second lot to cost once the first trade hits its mark in order to preserve our profits.

In contrast, the lack of wage growth paired with the ongoing slack in the real economy may weigh on consumption, and a dismal sales report may produce further weakness in the reserve currency as it raises the scope for additional monetary support. As a result, if the print falls short of market expectations, we will implement the same setup for a long euro-dollar trade as the short position mentioned above, just in reverse.

Retail spending slipped 0.3% in October to mark the first decline in four months, led by a 1.9% decline in demands for building material, while discretionary spending on clothing slipped 0.1% after expanding 0.4% in September. The weaker-than-expected sales report dragged on the greenback, which pushed the EURUSD above the 1.2750 figure, but we saw the pair consolidate during the North American trade as the exchange rate closed at 1.2733.