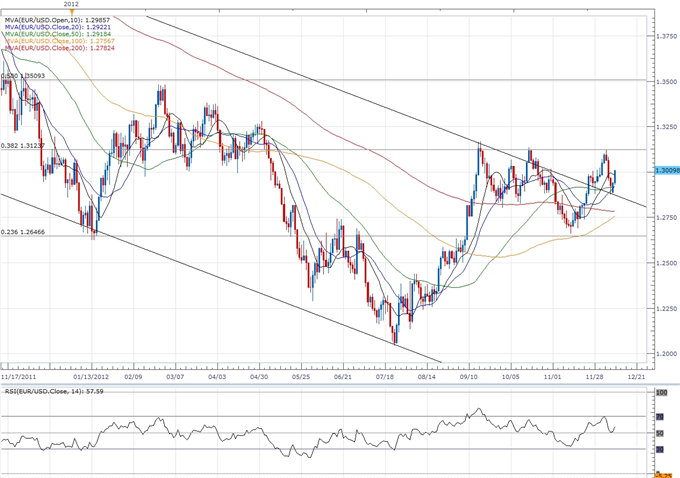 There’s speculation that the Federal Open Market Committee (FOMC) will expand its open-asset purchase program beyond the $40B monthly limit as ‘Operation Twist’ comes to an end, but we may see the central bank carry its current policy stance into the following year as the fundamental outlook for the world’s largest economy improves. Indeed, Fed Chairman Ben Bernanke sounded rather upbeat for 2013 amid the more broad-based recovery, and we may see the central bank start to slowly move away from its easing cycle as the recovery gradually gathers pace.

As the ongoing expansion in private sector credit paired with the budding recovery in the housing market highlights an improved outlook for growth, we may see the FOMC carry a wait-and-see approach into the following year, and a shift in the policy outlook should instill a bullish forecast for the USD as market participants scale back bets for more quantitative easing. However, subdued wage growth along with the slowdown in private sector consumption may prompt the Fed to encourage a stronger recovery, and we way see a sharp selloff in the greenback should the committee take additional steps to shore up the region.

As former trendline resistance appears to be acting as new support, speculation for more easing may spark another run at the 38.2% Fibonacci retracement from the 2009 high to the 2010 low around 1.3120, and the EURUSD may continue to retrace the decline from earlier this year should the FOMC carry its easing cycle into the following year. However, as Chairman Bernanke softens his dovish tone for monetary policy, we may see the central bank scale back his willingness to expand the balance sheet further, and a less-dovish policy statement may initial a more meaningful move towards the 23.6% Fib (1.2640-50) as the Fed looks to conclude its easing cycle.

Trading the given event risk may not be as clear cut as some of our previous trades as the Fed keeps the door open to expand its balance sheet further, but the statement accompanying the rate decision could set the stage for a long U.S. dollar as should the central bank strike a more neutral tone for monetary. Therefore, if the FOMC keeps the open-ended asset purchase program at $40B a month and raises its fundamental outlook for the region, we will need a red, five-minute candle following the announcement to establish a sell entry on two-lots of EURUSD. Once these conditions are fulfilled, we will set the initial stop at the nearby swing high or a reasonable distance from the entry, and this risk will generate our first objective. The second target will be based on discretion, and we will move the stop on the second lot to cost once the first trade hits its mark in order to lock-in our profits.

On the other hand, the Fed may take additional steps to foster a stronger recovery amid the ongoing turmoil in the world economy, and the central bank may keep the door open to expand its balance sheet further in 2013 in an effort to encourage a stronger recover. As a result, if the FOMC offsets the expiration of ‘Operation Twist’ and sees scope for additional monetary support, we will implement the same strategy for a long euro-dollar trade as the short position laid out above, just in the opposite direction.

Indeed, the FOMC maintained the 2015 pledge for its zero-interest rate policy amid the ‘moderate’ recovery, and held a relatively dovish tone for monetary policy as the fundamental outlook remains clouded with ‘significant downside risks.’ As the Fed keeps the door open to expand its balance sheet further, the cautious outlook held by the FOMC pushed the EURUSD back towards the 1.2975 figure, and the greenback struggled to regain its footing during the North American trade as the pair closed at 1.2972.