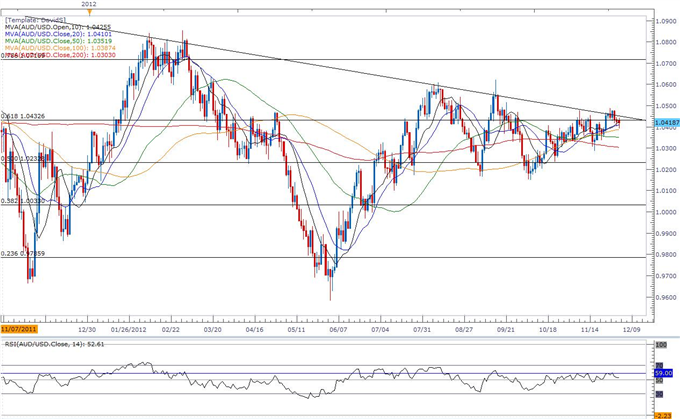 According to a Bloomberg News survey, 19 of the 28 economists polled see the Reserve Bank of Australia lowering the benchmark interest rate by another 25bp in December, and the ongoing easing cycle in the $1T economy may spark a selloff in the Australian dollar as long as the central bank maintains a dovish tone for monetary policy. Indeed, RBA warned that ‘further easing may be appropriate’ amid the ongoing slack in private sector activity, and Governor Glenn Stevens may see scope to implement further rate cuts in 2013 as the slowing recovery dampens the outlook for price stability.

The recent pickup in business investments along with the rise in employment may push the RBA to adopt a more neutral tone for monetary policy, and the central bank may look to conclude its easing cycle in the year ahead as the economic recovery gradually gather space. However, the slowdown in private sector consumption paired with the easing outlook for inflation may prompt the central bank to further insulate the $1T economy, and Governor Stevens may continue to scale back his fundamental assessment for the region as the outlook for growth and inflation remains weak.

As relative strength index on the AUDUSD continues to find resistance around the 59 figure, the pair appears to have carved out a lower top coming into December, and the pair may fall back towards the 50.0% Fibonacci retracement from the 2011 high to low around 1.0230 should the RBA keep the door open to lower borrowing costs further. With the aussie-dollar preserving the bearish trend carried over from the previous year, we anticipate further declines in 2013, and a rate cut paired with a dovish policy statement may establish a long-term downward trend in the exchange rate as interest rate expectations falter.

Expectations for a rate cut certainly casts a bearish outlook for the higher-yielding currency, but a neutral policy stance may pave the way for a long Australian dollar trade as market participants scale back bets for a rate cut. Therefore, if the RBA keeps the cash rate at 3.25%, we will need to see a green, five-minute candle following the announcement to establish a long entry on two-lots of AUDUSD. Once these conditions are met, we will set the initial stop at the nearby swing low or a reasonable distance from the entry, and this risk will generate our first target. The second objective will be based on discretion, and we will move the stop on the second lot to breakeven once the first trade hits its mark in order to preserve our profits.

On the other hand, the weakness in private sector activity paired with the slowdown in global trade may continue to dampen the outlook for growth and inflation, and the central bank may show a greater willingness to further embark on its easing cycle in an effort to stem the downside risks surrounding the region. As a result, if the RBA announces a 25bp rate and preserves a dovish tone for monetary policy, we will implement the same strategy for a short aussie-dollar as the long position laid out above, just in the opposite direction.

‘With prices data slightly higher than expected and recent information on the world economy slightly more positive,’the Reserve Bank of Australia kept the benchmark interest rate at 3.25% in November, but held a cautious tone for the region as ‘key commodity prices for Australia remain significantly lower than earlier in the year.’ Indeed, the Australian dollar surged higher following the announcement, with the AUDUSD climbing above the 1.0400 figure, and we saw the higher-yielding currency hold its ground throughout the day as the exchange rate closed at 1.0432.

View the http://www.fxcmexpo.com/videos/trading-the-news-fxcm-expo-2011/ on ‘Trading the News’ For Additional Resources