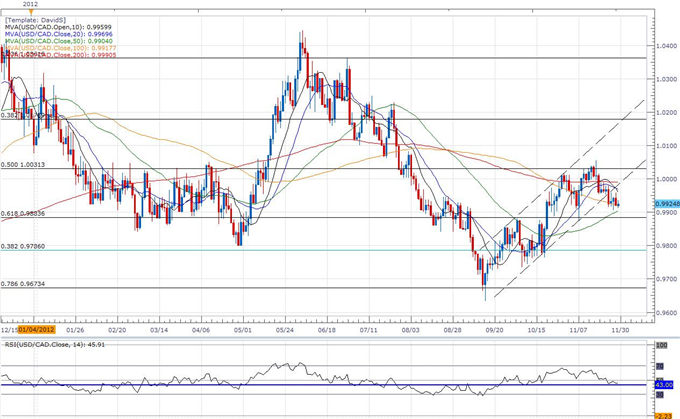 The GDP report is expected to show Canada expanding 0.8% in the third-quarter, and a marked slowdown in the growth rate could spark a sharp selloff in the Canadian dollar as the data curbs speculation for a rate hike. As the economic recovery loses steam, we should see Bank of Canada (BoC) Governor Mark Carney strike a more neutral tone for monetary policy, and the central bank may stick to the sidelines throughout the first-half of 2013 in an effort to shore up the slowing economy.

Greater demands for Canadian assets paired with the resilience in the housing market may generate a stronger-than-expected GDP print, and a positive development may renew bets for a rate hike as the central bank aims to stem the risk for an asset bubble. However, the slowdown in private sector consumption along with easing job growth may have produced a significant drag on economic activity, and a dismal development may dampen the appeal of the Canadian dollar as the fundamental outlook for the region deteriorates.

As the USDCAD preserves the range-bound price action from earlier this week, we should see the pair hold steady going into the event, and we may see a move back towards parity should the relative strength index continue to find interim support around the 43 figure. However, the dollar-loonie may preserve the sideways price action carried over from the previous month as the moving averages start to converge with one another, and the pair may hold steady going into the following year as the BoC adopts a more neutral tone for monetary policy.

Forecasts for a slower rate of growth certainly casts a bearish outlook for the loonie, but a positive development may set the stage for a long Canadian dollar trade as it raises the fundamental outlook for the region. Therefore, if the GDP print tops market forecast, we will need a red, five-minute candle following the release to establish a sell entry on two lots of USDCAD. Once these conditions are met, we will set the initial stop at the nearby swing high or a reasonable distance from the entry, and this risk will generate our first objective. The second target will be based on discretion, and we will move the stop on the second lot to breakeven once the first trade hits its mark in an effort to lock-in our gains.

In contrast, the recent weakness in private sector consumption along with weaker job growth may produce a dismal GDP report, and a marked slowdown in the economy may drag on the exchange rate as it dampens the scope for a rate hike. As a result, if the growth rate slows to 0.8% or lower, we will carry out the same setup for a long dollar-loonie trade as the short position laid out above, just in the opposite direction.

Economic activity in Canada increased 1.8% for the second consecutive quarter amid a downward revision in the 1Q print, and the slowing recovery may encourage the Bank of Canada to keep the benchmark interest rate on hold in an effort to shield the economy from external shocks. However, the better-than-expected print propped up the Canadian dollar, with the USDCAD quickly slipping back below the 0.9900 figure, and the loonie continued to gain ground throughout the day as the pair closed at 0.9851.