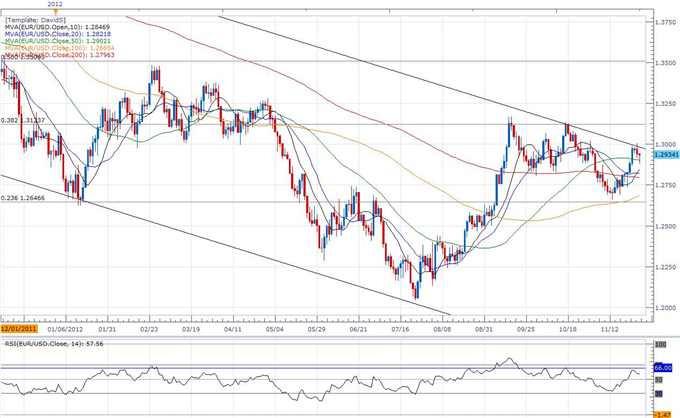 Unemployment in Germany is projected to increase another 16K in November and the ongoing weakness in the labor market may drag on the EURUSD as the euro-area faces a deepening recession. Indeed, the Organization for Economic Cooperation and Development (OECD) encouraged the European Central Bank (ECB) to implement further rate cuts to combat the economic downturn, but we may see the deterioration in the labor market intensify as the debt crisis continues to drag on the real economy.

The rebound in business sentiment paired with the rise in private sector consumption may held to encourage job growth in Europe’s largest economy, and a positive development may increase the appeal of the single currency as it dampens the threat for a prolonged recession in the euro-area. However, the ongoing contraction in service-based activity along with the drop in production may spark a sharp rise in unemployment, and the weakening outlook for growth may encourage the ECB to lower borrowing costs further in an effort to dampen the downside risk for price stability.

As the relative strength index on the EURUSD fall back ahead of the 66 figure, the downward trend from 2011 should continue to take shape over the coming months, and the pair may face a sharp selloff going into the end of the year as it carves out a lower top around 1.3000. In turn, dismal data out of Germany may initiate another run 1.2640-50, the 23.6% Fibonacci retracement from the 2009 to the 2010 low, and the single currency remains poised to face additional headwinds in 2013 as European policy makers maintain a reactionary approach in addressing the debt crisis.

Expectations for a sixth consecutive rise in unemployment certainly casts a bearish outlook for the single currency, but a positive development may pave the way for a long Euro trade should the report dampen fears of a prolonged recession. Therefore, if the labor market improves in November, we will need to see a green, five-minute candle following the release to establish a long entry on two-lots of EURUSD. Once these conditions are met, we will set the initial stop at the nearby swing low or a reasonable distance from the entry, and this risk will generate our first objective. The second target will be based on discretion, and we will move the stop on the second lot to cost once the first trade hits its mark in an effort to protect our gains.

On the other hand, fears of a prolonged economic downturn may push businesses to scale back on hiring, and a dismal print may spark a selloff in the exchange rate lower as it dampens the outlook for growth. As a result, if unemployment rises 16K or greater, we will implement the same strategy for a short euro-dollar trade as the long position laid out about, just in reverse.

The number of unemployed increased another 20K in October, while the jobless rate held steady at 6.9% amid an upward revision in last month’s print. Despite the dismal development, the EURUSD showed a fairly muted reaction to the jobless report, and the pair managed to track higher throughout the day, with the exchange rate closing at 1.2957.