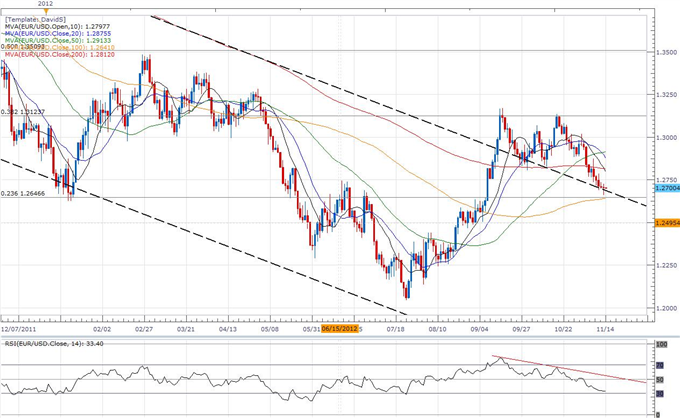 U.S. retail sales are expected to contract 0.2% in October following the devastating aftermath of Hurricane Sandy and a dismal report may drag on the dollar as it raises concerns for a slower recovery. As Fed doves maintain a cautious outlook for the world’s largest economy, a dismal print may fuel speculation for additional monetary support, and the dollar may face additional headwinds over the remainder of the year should the central bank show a greater willingness to carry ‘Operation Twist’ into 2013.

The ongoing improvement in household sentiment paired with the resilience in private sector consumption may boost the retail sales figure, and a positive development may fuel a near-term rally in the U.S. dollar as it dampens the Fed’s scope to expand its balance sheet further. However, subdued wage growth along with the rebound in planned job cuts may push Americans to reduce spending, and a sharp decline in consumption may dampen the appeal of the reserve currency as the central bank keeps the door open to conduct more quantitative easing.

As the double top formation in the EUR/USD pans out, it looks as though the pair is look at the 23.6% Fibonacci retracement from the 2009 high to the 2010 low (1.2640-50) for near-term support, and we may see a short-term correction in the exchange rate as the relative strength index continues to hold above oversold territory. However, as the oscillator maintains the downward trend carried over from September, a shift in the Fed’s policy outlook may threaten the rebound from the yearly low (1.2041), and the pair may trade heavy going into the following year as the fundamental outlook for the U.S. improves.

Forecasts for a drop in retail sales certainly casts a bearish outlook for the greenback, but an above-forecast print could pave the way for a long U.S. dollar trade as it dampens expectations for more easing. Therefore, if private spending holds flat or unexpectedly increases from the previous month, we will need a red, five-minute candle following the release to establish a sell entry on two-lots of EURUSD. Once these conditions are met, we will set the initial stop at the nearby swing high or a reasonable distance from the entry, and this risk will generate our first target. The second objective will be based on discretion, and we will move the stop on the second lot to cost once the first trade hits its mark in order to preserve our gains.

On the other hand, the lack of wage growth paired with the ongoing slack in the real economy may ultimately lead to a weak sales report, and a marked contraction in household spending may dampen the appeal of the greenback as currency traders maintain bets for more easing. As a result, if consumption tracks lower from the previous month, we will implement the same setup for a long euro-dollar trade as the short position laid out above, just in reverse.

Household spending increased another 1.1% in September after expanding a revised 1.2% the month prior, and the resilience in private sector consumption may encourage the Federal Reserve to scale back its dovish tone for monetary policy as the economic recovery gradually gathers pace. Indeed, the better-than-expected print sparked a bullish reaction in the dollar, with the EURUSD slipping back below the 1.2950 figure, but we saw the pair consolidate throughout the North American trade as it ended the day at 1.2947.