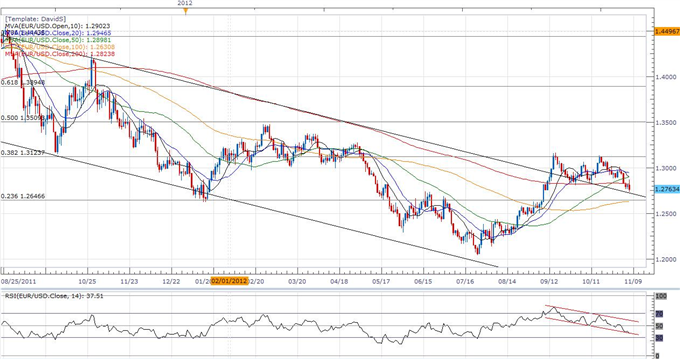 Forex traders may show a fairly muted reaction to the European Central Bank (ECB) interest rate decision as the board keeps borrowing costs on hold, but the press conference with President Mario Draghi may instill a bearish outlook for the Euro should the central bank head show a greater willingness to ease monetary policy further. After introducing the Outright Monetary Transactions program, the International Monetary Fund argued that the Governing Council has ‘ample justification’ to push the benchmark interest rate to a fresh record-low, and we may see a growing number of ECB officials call for additional support as the region faces a deepening recession. With the EU curbing its growth forecast for the euro-area, the weakening outlook raises the central bank’s scope to lower rates further, and the group may look towards a zero-interest rate policy in an effort to shore up the ailing economy.

Although the growth outlook remains tilted to the downside, the stickiness in inflation may encourage the ECB to soften its dovish tone for monetary policy as the central bank maintains its one and only mandate to preserve price stability. However, the Governing Council may now look to target the benchmark interest rate amid fears of a deepening recession, and the central bank may show a greater concern for the weakening labor market as the debt crisis continues to drag on the real economy.

As the EURUSD struggles to push back above the 200-Day SMA (1.2824), we should see the double-top formation continue to take shape, and we will maintain a bearish outlook for the pair as Europe faces a deepening recession. However, as the moving averages converge with one another, with the relative strength index threatening channel support, the ECB rate decision may serve as the fundamental catalyst to spur a short-term rebound in the exchange rate.

Trading the ECB rate decision may not be as clear cut as some of our previous trades as the central bank preserves its current policy, but less dovish policy statement may pave the way for a long Euro trade as FX traders pare bets for additional monetary support. Therefore, if President Draghi talks down speculation for a rate cut, we will need a green, five-minute candle following his statements to generate a long entry on two-lots of EURUSD. Once these conditions are met, we will set the initial stop at the nearby swing low or a reasonable distance from the entry, and this risk will establish our first target. The second objective will be based on discretion, and we will move the stop on the second lot to cost once the firs trade hits its mark in an effort to preserve our profits.

On the other hand, the Governing Council may weigh additional measures to jump-start the economy amid the weakening outlook for growth and inflation, and we may see the central bank carry its easing cycle into the following year as the region faces a deepening recession. As a result, if the ECB looks to target the benchmark interest rate, we will implement the same strategy for a short euro-dollar trade as the long position laid out above, just in the opposite direction.

Although the European Central Bank kept the benchmark interest rate at 0.75%, President Mario Draghi unveiled the Outright Monetary Transactions program, which will start sterilized purchases of government debt ‘once all the prerequisites are in place.’ Indeed, this Euro rallied following the announcement, with the EURUSD pushing above the 1.3000 figure, and the single currency gained ground throughout the North American trade as the exchange rate ended the day at 1.3016.