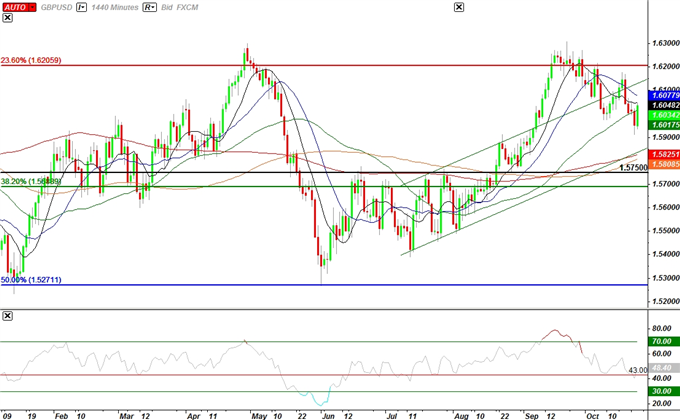 The advance GDP report is expected to show the U.K. expanding 0.6% in the third-quarter, and a large uptick in the growth rate should prompt a bullish reaction in the British Pound as it dampens the Bank of England’s scope to expand its balance sheet further. As the British economy emerges from the recession, BoE Governor Mervyn King certainly appears to be softening his dovish tone for monetary policy, and we should see the Monetary Policy Committee slowly move away from its easing cycle as a growing number of central bank officials scale back their forecast for undershooting the 2% target for inflation.

The uptick in wage growth paired with the rebound in private sector consumption certainly bodes well for U.K. GDP, and a positive development should keep the BoE on the sidelines as the Funding for Lending scheme continues to work its way through the real economy. However, the slowdown in global trade paired with the slump in businesses outputs may drag on the exchange rate, and a dismal growth report my instill a bearish outlook for the sterling as Governor King keeps the door open to further expand its non-standard measures.

As the relative strength index on the GBPUSD dips below interim support around the 43 figure, a dismal GDP print may threaten the bullish trend carried over from July, and we may see the pair work its way back towards former resistance around 1.5750 should the data renew speculation for more quantitative easing. However, as the U.K. emerges from the recession, a large uptick in the growth rate should spark another run at the 23.6% Fibonacci retracement from the 2009 low to high around 1.6200, and we may see the pound outperform against its major counterparts throughout the remainder of the year as the BoE appears to be moving away from its easing cycle.

Trading the given event risk instills a bullish outlook for the sterling as the U.K. economy returns to growth, and a positive development may pave the way for a long British Pound trade as market participants scale back bets for more easing. Therefore, if the growth rate expands 0.6% or greater, we will need to see a green, five-minute candle following the release to generate a buy entry on two-lots of GBPUSD. Once these conditions are met, we will set the initial stop at the nearby swing low or a reasonable distance for the entry, and this risk will establish our first objective. The second target will be based on discretion, and we will move the stop on the second lot to cost once the first trade hits its mark in an effort to lock-in out gains.

In contrast, the downturn in global trade paired with the ongoing slack in private sector activity may drag on the growth rate, and a dismal report is likely to spark a selloff in the exchange rate as market participants ramp up bets for more QE. As a result, if the advanced GDP reading falls short of forecast, we will implement the same strategy for a short pound-dollar trade as the long position laid out above, just in the opposite direction.

The U.K. contracted another 0.7% in the second-quarter amid forecasts for a 0.2% decline in the growth rate, and the deepening downturn may encourage the Bank of England to expand monetary policy further as the central bank sees a renewed risk of undershooting the 2% target for inflation. Indeed, the dismal GDP print dragged on the British Pound, with the GBPUSD slipping below the 1.5500, but we saw the pair consolidate throughout the North American trade as the exchange rate closed at 1.5495.