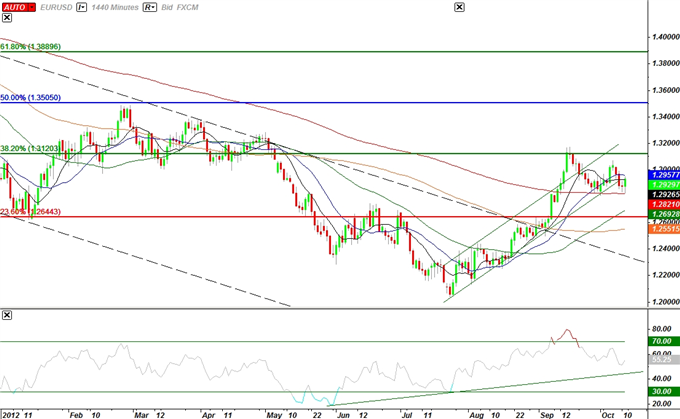 EURUSD: Trading the U. of Michigan Confidence Survey

The U. of Michigan Confidence survey is expected to fall back to 78.0 from 78.3 in September, and a drop in household sentiment may weigh on the U.S. dollar as it dampens the outlook for growth. As Fed Chairman Ben Bernanke aims to encourage a stronger recovery, the a dismal report may heighten speculation for more quantitative easing, but we may see a growing number of central bank officials soften their dovish tone for monetary as the world’s largest economy gets on a more sustainable path.

The ongoing improvement in the labor market paired with the rebound in wage growth may prop up household confidence, and a positive development may spark a bullish reaction in the U.S. dollar as it limits the Fed’s scope to expand its balance sheet further. However, the slowdown in private sector consumption along with sticky price growth may impede on consumer confidence, and a marked decline in the U. of Michigan survey may instill a bearish outlook for the dollar as Fed Chairman Bernanke maintains a fairly dovish tone for monetary policy.

As the EURUSD fails to maintain the upward trend from earlier this year, the pair may continue to consolidate over the remainder of the week, and we may see the euro-dollar may another run at the 38.2% Fibonacci retracement from the 2009 high to the 2010 low around 1.3120 as the 200-Day SMA (1.2820) continues to hold up as interim support. However, as the EURUSD carves out a lower top around the 38.2% Fib, the pullback from 1.3170 may turn into a larger correction, and we may see the pair work its way back towards the 23.6% Fib (1.2640-50) should the report curb speculation for more QE.

Forecasts for a drop in consumer confidence casts a bearish outlook for the greenback, but a positive development may pave the way for a long U.S. dollar trade as it dampens the scope for additional monetary support. Therefore, if the U. of Michigan survey unexpectedly improves in October, we will need a red, five-minute candle following the release to generate a sell entry on two-lots of EURUSD. Once these conditions are met, we will set the initial stop at the nearby swing high or a reasonable distance from the entry, and this risk will establish our first target. The second objective will be based on discretion, and we will move the stop on the second lot to cost once the first trade hits its mark

In contrast, the stickiness in price growth paired with the ongoing weakness in the real economy may drag on household sentiment, and a marked decline in the survey may drag on the dollar as it fuels speculation for additional monetary support. As a result, if the index slips to 78.0 or lower, we will implement the same strategy for a long euro-dollar trade as the short position laid out above, just in reverse.

September 2012 U. of Michigan Confidence 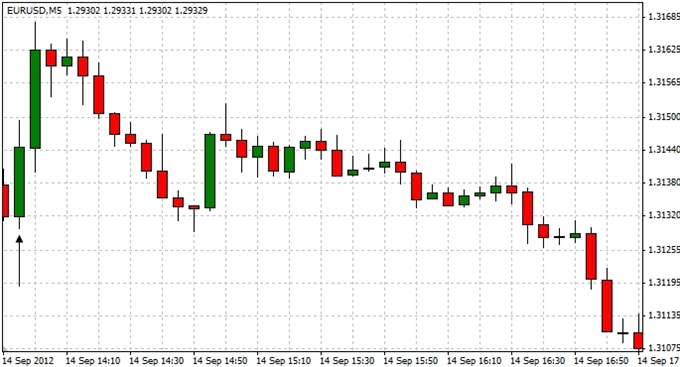 U.S. household confidence continued to pick up in September, with the U. of Michigan survey advancing to 79.2 from 74.3, and the data certainly instills an improved outlook for the world’s largest economy as private sector consumption remains one of the leading drivers of growth. However, the development propped up the EURUSD as it fueled a rise in risk-taking behavior, but the initial reaction fizzled out during the North American trade as the pair ended the day at 1.3128.