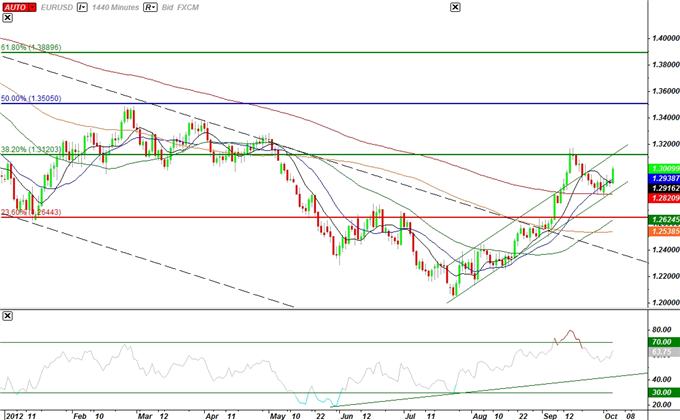 The world’s largest economy is anticipated to add another 115K jobs in September, and the uptick in job growth may increase the appeal of the U.S. dollar as it raises the outlook for growth. At the same time, the unemployment rate is expected to widen to 8.2% from 8.1% as discouraged workers return to the labor force, and a slew of positive developments will certainly dampen the Fed’s scope to expand its balance sheet further as central bank officials see a limited risk for a double-dip recession. In turn, the weakening argument for more quantitative easing should instill a bullish outlook for the greenback, and we may see the FOMC start to soften its dovish tone for monetary policy as recovery gradually gathers pace.

As the developments coming out of the U.S. raises the outlook for employment, we may see the Non-Farm Payrolls report top market expectations, and a marked improvement in the labor market should sap speculation for additional monetary support as the economy gets on a more sustainable path. However, the slowdown in consumption paired with the downturn in private sector credit may weigh on hiring, and businesses may keep a cap on their labor force as the central bank maintains a cautious tone for the region.

Indeed, the EURUSD appears to be making another run at the 38.2% Fibonacci retracement from the 2009 high to the 2010 low around 1.3120, and the pair may continue to retrace the decline from earlier this year as the upward trend from the end of July continues to take shape, However, should NFPs dampen bets for more QE, we may see the EURUSD threaten the bullish formation, and we will look for a close below the 200-Day SMA (1.2820) to reinforce a bearish outlook for the pair.

Expectations for a faster rate of job growth certainly instills a bullish outlook for the greenback, and a positive development may pave the way for a long U.S. dollar trade as it raises the outlook for the world’s largest economy. Therefore, if NFPs expand 115K or more in October, we will need a red, five-minute candle following the release to generate a sell entry on two-lots of EURUSD. Once these conditions are fulfilled, we will place the initial stop at the nearby swing high or a reasonable distance from the entry, and this risk will generate our first target. The second objective will be based on discretion, and we will move the stop on the second lot to cost once the first trade hits its mark in an effort to lock-in our profits.

On the other hand, the slowdown in consumption along with the ongoing slack in the real economy may push businesses to scale back on hiring, and a dismal employment report may drag on the dollar as the Fed keeps the door open to expand its balance sheet further. As a result, if the employment report falls short of market expectations, we will implement the same strategy for a long euro-dollar trade as the short position mentioned above, just in the opposite direction. 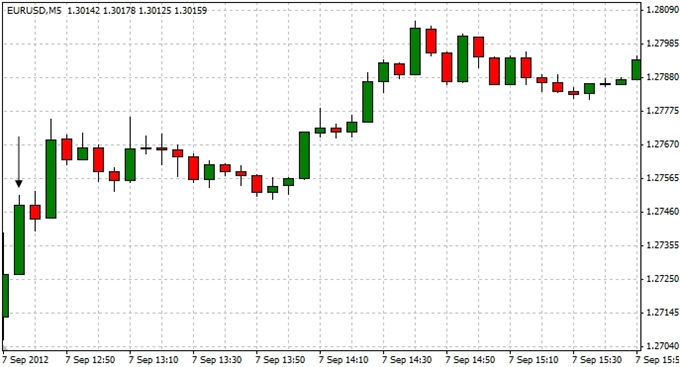 The U.S. economy added another 96K jobs in August after expanding a revised 141K the month prior, while the unemployment rate unexpectedly slipped to 8.1% from 8.3% during the same period as discouraged workers continued to leave the labor force. Indeed, the protracted recovery in employment weighed on the dollar, with the EURUSD climbing back above the 1.2750 figure, and the greenback struggled to hold its ground throughout the North American trade as the pair ended the day at 1.2815.