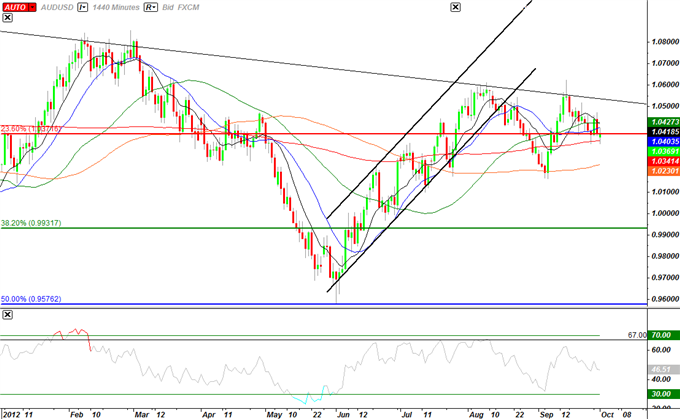 Although the Reserve Bank of Australia is widely expected to keep the benchmark interest rate at 3.50% in October, the central bank may sound more dovish this time around as the $1T economy copes with a slowing recovery. As China – Australia’s largest trading partner – faces a growing threat for a ‘hard landing,’ Governor Glenn Stevens may see scope to cut borrowing costs further, and we may see the RBA carry its easing cycle into the following year as the resource boom is expected to come to an end over the next 12 to 24 months.

The recent pickup in the housing market paired with the rebound in consumer confidence may encourage the RBA to strike a more neutral tone for monetary policy, and we may see the central bank endorse a wait-and-see approach over the near-term as Governor Stevens highlights the bright spots in the economy. However, the central bank may sound more cautious amid the recent weakness in private sector activity along with the downturn in global trade, and the RBA may show a greater willingness to cut the cash rate further in an effort to encourage a stronger recovery.

As the AUDUSD preserves the downward trend from 2011, we will maintain a bearish outlook for the high-yielding currency, and the pair may continue to give back the rebound from 1.0163 should the RBA talk up speculation for a rate cut. However, as we have yet to see a close below the 200-Day SMA (1.0340), a less dovish policy statement may ultimately threaten the bearish trend in the exchange rate, and we may see the aussie-dollar retrace the decline from 1.0623 as interest rate expectations improve.

Trading the rate decision may not be as clear cut as some of our previous traders as the RBA sticks to its current policy in October, but a less dovish statement following the rate decision could pave the way for a long Australian dollar trade as market participants scale back bets for lower borrowing costs. Therefore, if Governor Stevens sees a limited scope to lower the cash rate further, we will need to see a green, five-minute candle following the announcement to generate a buy entry on two-lots of AUDUSD. Once these conditions are met, we will set the initial stop at the nearby swing low or a reasonable distance from the entry, and this risk will establish our first target. The second objective will be based on discretion, and we will move the stop on the second lot to cost once the first trade hits its mark in order to lock-in our gains.

On the other hand, the renewed weakness in private sector activity paired with the slowdown in global trade may continue to dampen the outlook for growth and inflation, and the central bank may show a greater willingness to further embark on its easing cycle in an effort to stem the downside risks surrounding the region. As a result, if the RBA sounds more dovish this time around and talks up speculation for a rate cut, we will implement the same strategy for a short aussie-dollar as the long position laid out above, just in the opposite direction. 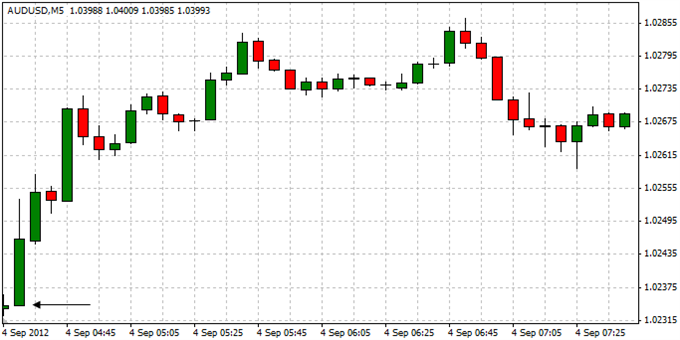 Indeed, the Reserve Bank of Australia kept the benchmark interest rate at 3.50% as ‘growth has been running close to trend,’ and the central bank struck a more neutral tone for monetary policy as the rate cuts from earlier this year are ‘still working its way through the economy.’ The Australia dollar turned higher following the fresh batch of central bank rhetoric, with the AUDUSD quickly pushing back above 1.0250, but the high-yielding currency struggled to hold its ground throughout the day as the pair closed at 1.0193.