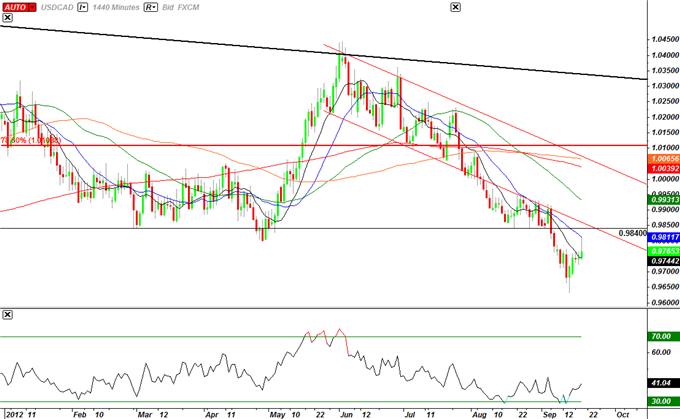 Price growth in Canada is expected to hold steady at an annualized rate of 1.3% during August, but a slowdown in core rate of inflation may weigh on the Canadian dollar as it dampens the scope for a rate hike. The core CPI is projected to increase 1.5% during the same period, which would mark the slowest pace of growth since June 2011, and easing price pressures may encourage Bank of Canada Governor Mark Carney to soften his tone for higher borrowing costs amid the ongoing slack within the real economy.

Businesses in Canada may prop up consumer prices amid the better-than-expected 2Q GDP report paired with the ongoing improvement in the labor market, and an unexpected rise in the CPI may fuel speculation for a rate hike as the BoC tries to address the record-rise in household indebtedness. However, easing input costs along with the slowdown in private sector spending may drive firms to push down consumer prices, and a soft inflation print may instill a bearish outlook for the Canadian dollar as it limits the BoC’s scope to raise the benchmark interest rate from 1.00%.

As the USDCAD struggles to push back above the 20-Day SMA (0.9812), we would need to see a weaker-than-expected inflation print to see the rebound from 0.9632 gather pace, and the bounce may turn into a larger correction as the relative strength index comes off of oversold territory. However, sticky price growth would certainly increase the BoC’s case for a rate hike as the central bank tries to stem the risk for a housing bubble, and we may see Governor Carney continue to talk up speculation for higher borrowing costs as the recovery gathers pace.

Forecasts for a softer core CPI print certainly instills a bearish outlook for the loonie, but sticky price growth may pave the way for a long Canadian dollar trade as it fuels expectations for a rate hike. Therefore, if the inflation report tops market expectations, we will need to see a red, five-minute candle following the release to establish a sell entry on two-lots of USDCAD. Once these conditions are fulfilled, we will place the initial stop at the nearby swing high or a reasonable distance from the entry, and this risk will generate our first target. The second objective will be based on discretion, and we will move the stop on the second lot to cost once the first trade hits its mark in order to preserve our winnings.

In contrast, the slowdown in private consumption paired with falling input costs may bear down on inflation, and a dismal print may trigger a bearish reaction in the Canadian dollar as market participants scale back bets for higher borrowing costs. As a result, if the CPI disappoints, we will carry out the same strategy for a long dollar-loonie trade as the short position laid out above, just in reverse. 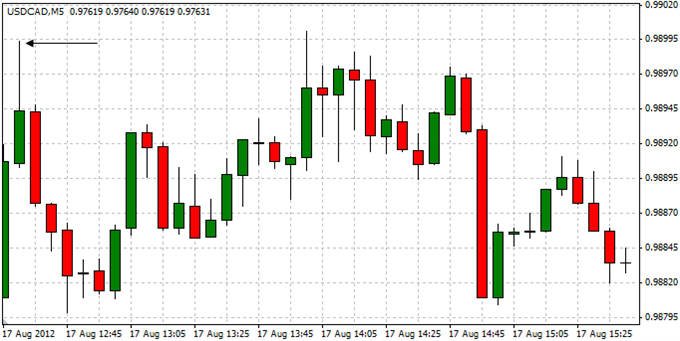 The headline reading for Canadian inflation unexpectedly cooled to 1.3% in July from 1.5% the month prior, while the core consumer price index increased 1.7% during the same period to mark the slowest pace of growth since July 2011. Although the USDCAD initially pushed higher following the softer-than-expected inflation report, we saw the dollar-loonie consolidate throughout the North American trade as the pair ended the day at 0.9885.