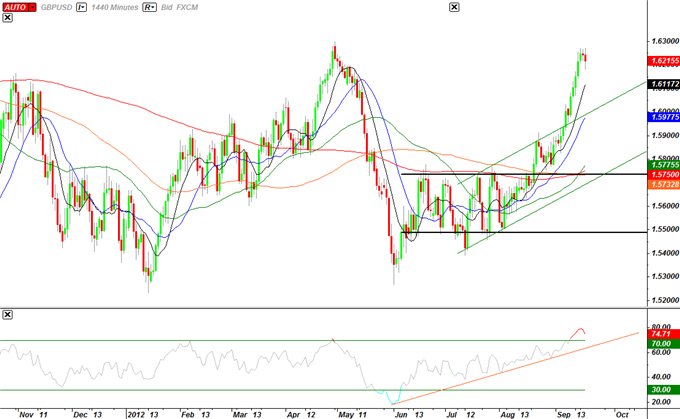 U.K. retail sales are projected to contract 0.3% in August and the slowdown in private sector consumption may drag on the British Pound as it fuels speculation for additional monetary support. Although the Bank of England voted unanimously to maintain its current policy in September, the policy meeting minutes highlighted the scope for more easing, but it seems as though the Monetary Policy Committee is scaling back its forecast for undershooting the 2% target for inflation as the economic recovery slowly picks up.

The uptick in wage growth along with the recent improvement in the labor market certainly bodes well for private sector consumption, and the sales report may continue to top market expectations as the region looks to be emerging from the double-dip recession. However, the stickiness in price growth paired with the ongoing weakness in consumer sentiment may drag on retail sales, and a dismal development may instill a bearish outlook for the sterling as market participants maintain bets for more quantitative easing.

Although the relative strength index on the GBPUSD continues to reflect an overbought signal, we may see the sterling make another run at the 1.6300 figure should the report dampen speculation for more easing. However, as the RSI falls back from a high of 79, a dismal development may turn the pullback from 1.6248 into a larger correction, and we may see the oscillator fail to maintain the upward trend from June should the data spur bets for additional QE.

Forecasts for a slowdown in private sector consumption instills a bearish outlook for the sterling, but a positive development may set the stage for a long British Pound trade as it limits the BoE’s scope to ease policy further. Therefore, if the sales report tops market expectations, we will need to see a green, five-minute candle following the release to establish a long entry on two-lots of GBPUSD. Once these conditions are fulfilled, we will set the initial stop at the nearby swing low or a reasonable distance from the entry, and this risk will generate our first target. The second objective will be based on discretion, and we will move the stop on the second lot to cost once the first trade hits its mark in an effort to lock-in our gains.

In contrast, the ongoing slack in the housing market paired with the persistent weakness in consumer confidence may drag on retail sales, and a dismal print may trigger a near-term correction in the sterling as it remains overbought. As a result, if spending slips 0.3% of more in August, we will implement the same setup for a short pound-dollar trade as the long position laid out above, just in reverse.

Impact that U.K. Retail Sales has had on GBP during the last release 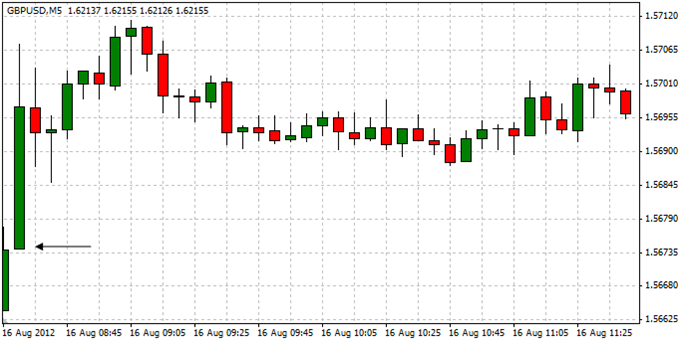 Household spending unexpectedly held flat in July after expanding a revised 1.1% the month prior, while retail sales including auto fuel advanced another 0.3% during the same period. Indeed, the resilience in private sector consumption propped up the British Pound, with the GBPUSD climbing above the 1.5700 figure, and the sterling continued to gain ground during the North American trade as the pair ended the day at 1.5730..