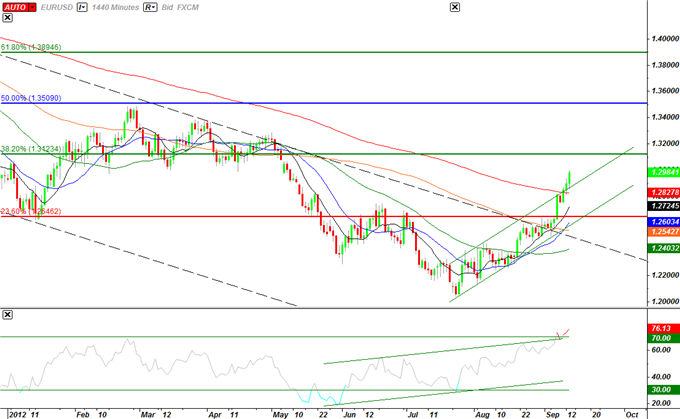 Consumer prices in the U.S. are projected to increase 1.7% in August following the 1.4% expansion the month prior, and the faster rate of price growth may prop up the dollar as it dampens the Fed scope to embark on additional monetary easing. Although the Fed announced another asset purchase program and extends its interest rate pledge out to 2015, the central bank raised the lower end of its inflation forecast for 2012-2015, and a marked rebound in consumer prices may encourage the FOMC to soften its dovish tone for monetary policy as the committee continues to carry out its dual mandate to promote full-employment while preserving price stability.

Rising input prices paired with the ongoing expansion in private sector consumption may push businesses to pass on higher costs onto consumers, and a large uptick in the CPI may fuel a bullish reaction in the dollar as the data saps speculation for more easing. However, subdued wage growth paired with the persistent weakness in the labor market may continue to bear down on price growth, and a softer-than-expected inflation report may fuel speculation for additional monetary support as the FOMC keeps the door open to expand its balance sheet further.

The short-term rally in the EURUSD looks a bit overdone as the relative strength index advances to 76, but we need to see the oscillator come off of overbought territory to see a correction take shape. Indeed, a stronger-than-expected CPI print may serve as a fundamental catalyst to spark a short-term reversal in the exchange rate, but the EURUSD may ultimately make a run at the 38.2% Fibonacci retracement from the 2009 high to the 2010 low around 1.3120-30 should the report fuel speculation for more easing.

Expectations for faster price growth certainly instills a bullish outlook for the greenback, and the market reaction may pave the way for a long U.S. dollar trade as currency traders scale back bets for more monetary support. Therefore, if the headline reading advances to 1.7% or higher, we will need a red, five-minute candle following the release to generate a sell entry on two-lots of EURUSD. Once these conditions are fulfilled, we will place the initial stop at the nearby swing high or a reasonable distance from the entry, and this risk will establish our first target. The second objective will be based on discretion, and we will move the stop on the second lot to cost once the first trade hits its mark in order to preserve our profits.

In contrast, the ongoing slack in private sector activity paired with the persistent weakness in the labor market may continue to drag on price growth, and subdued inflation may heighten the bearish sentiment surrounding the USD as the Fed continues to embark on its easing cycle. As a result, if the CPI report falls short of expectations, we will carry out the same setup for a long euro-dollar trade as the short position mentioned above, just in the opposite direction. 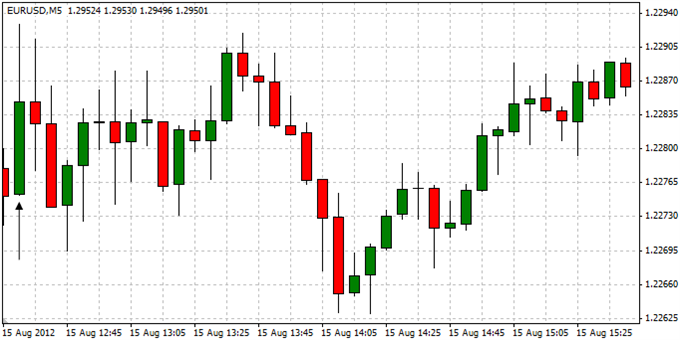 The headline reading for inflation narrowed to 1.4% in July to mark the slowest pace of growth since November 2010, while core consumer prices unexpectedly slipped to 2.1% from 2.2% during the same period. Indeed, the softer-than-expected CPI report initially pushed the EURUSD above the 1.2290 figure, and the dollar struggled to hold its ground throughout the North American trade as the pair ended the day at 1.2287.