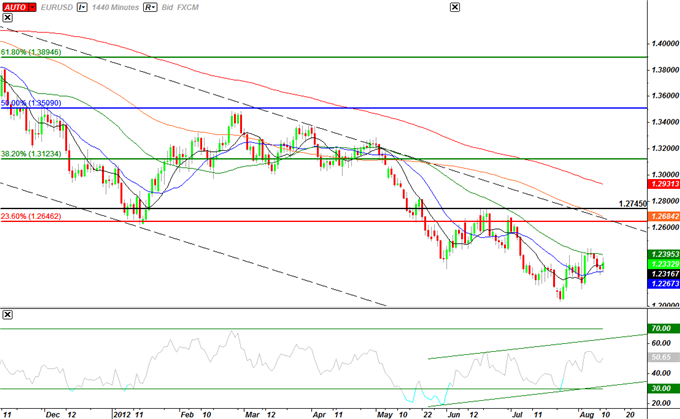 The advance GDP report is expected to show the euro-area contracting 0.2% in the second-quarter, and a dismal development may spark a sharp selloff in the single-currency as it highlights the risk for a prolonged recession. As the fundamental outlook for the region deteriorates, the European Central Bank is widely anticipated to carry out its easing cycle throughout the second-half of the year, and we may see the Governing Council implement a rate of tools over the coming months as the governments operating under the monetary union struggle to get their house in order.

The ongoing expansion in private sector consumption paired with favorable trade conditions may help to produce a stronger-than-expected growth report, and a positive print may increase the appeal of the single-currency as it curbs the risk for a prolonged economic downturn. However, the record-high unemployment paired with the slowdown in business outputs may generate a marked drop in GDP, and fears of a deepening recession may ultimately produce fresh yearly lows in the exchange rate as the outlook for growth and inflation turns increasingly bleak.

As the downward trend carried over from 2011 continues to take shape, we will maintain our bearish forecast for the EURUSD, and a dismal development may ultimately lead the EURUSD to give back the rebound from June (1.2041) as it appears to be carving out a lower top around the 50-Day SMA (1.2395). However, there appears to be a bullish divergence in the relative strength index as the oscillator continues to come off of oversold territory, and an upbeat GDP print may spur a run at the 23.6% Fibonacci retracement from the 2009 high to the 2010 low around 1.2640-50 as it raises the outlook for growth and inflation.

Forecasts for an economic contraction casts a bearish outlook for the single currency, but a positive development may pave the way for a long Euro trade as it alleviates fears of a prolonged recession. Therefore, if the print tops market expectations, we will need to see a green, five-minute candle subsequent to the release to establish a buy entry on two-lots of EURUSD. Once these conditions are met, we will place the initial stop at the nearby swing low or a reasonable distance from the entry, and this risk will generate our first objective. The second target will be based on discretion, and we will move the stop on the second lot to cost once the first trade hits its mark in an effort to lock-in our profits.

In contrast, the ongoing deterioration in the labor market paired with the slowdown in business activity may continue to drag on the growth rate, and we may see the GDP report fall short of market expectations as the debt crisis continues to weigh on the real economy. As a result, if the economy contracts 0.2% or greater in the second-quarter, we will implement the same strategy for a short euro-dollar trade as the long position laid out above, just in the opposite direction. 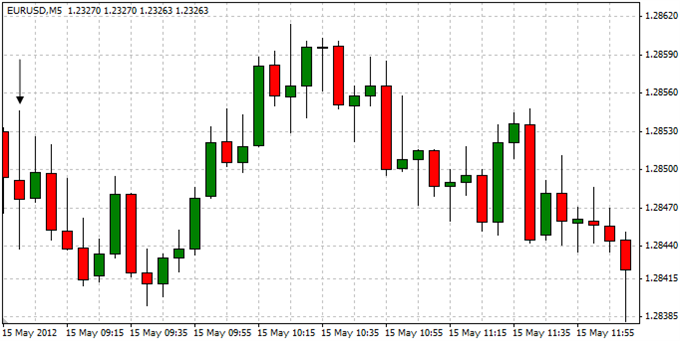 Economic activity in the euro-area held flat in the first-quarter after contracting 0.3% during the last three-months of 2011, but the fundamental outlook for the region remains bleak as the sovereign debt crisis continues to drag on the real economy. Although the print exceeded market expectations, the Euro struggled to hold its ground following the release, and the EURUSD tracked lower throughout the North American session as the pair closed at 1.2728.