The Bank of England quarterly inflation report will have a major impact on the British Pound as market participants weigh the outlook for monetary policy, and the fresh batch of central bank rhetoric may threaten the range-bounce price action in the GBPUSD as the Monetary Policy Committee keeps the door open to expand the balance sheet further. According to a survey by Bloomberg News survey, an overwhelming majority of the 16 economists polled see the BoE lowering its forecast for growth and inflation and the central bank may turn increasingly cautious towards the economy as the region faces a deepening recession. In turn, we may see BoE Governor Mervyn King talk up speculation for additional quantitative easing, but the MPC may stick to the sidelines over the coming months as the Funding for Lending program gets underway.

As the BoE and the U.K. Treasury work collectively to boost private sector activity, the central bank may endorse a wait-and-see approach throughout the second-half of the year, and we may see the GBPUSD continue to track sideways over the remainder of the week should the central bank refrain from hinting at more easing. However, the BoE may turn increasingly pessimistic towards the region as growth and inflation taper off, and fears of a prolonged economic downturn may result in a very dovish statement as the ongoing turmoil in the euro-area dampens the fundamental outlook for Britain.

As market participants turn their attention to the BoE inflation report, the updated forecast may fuel speculation for more QE, but the central bank may show a greater willingness to cut the benchmark interest rate further, which could threaten interim support around the 1.5500. However, we would need to see Governor King strike a more balanced tone for monetary policy to see a bullish reaction in the GBPUSD, and the pair may make another run at the 100-Day SMA at 1.5767 should the central bank head curb speculation for more easing.

Trading the inflation report may not be as clear cut as some of our previous trades, but we would need to hear a more balanced tone from the BoE to pave the way for a long British Pound trade. Therefore, if the central bank endorses a neutral policy stance for the medium-term, we will need to see a green, five-minute candle following the statement to establish a buy entry on two-lots of GBPUSD. Once these conditions are met, we will set the initial stop at the nearby swing low or a reasonable distance from the entry, and this risk will generate our first objective. The second target will be based on discretion, and we will move the stop on the second lot to breakeven once the first trade hits its mark in an effort to lock-in our gains.

On the other hand, the BoE may sound more downbeat towards the economy as the region heads for prolonged recession, and the central bank may show a greater willingness to expand its balance sheet further in an effort to stem the downside risks for growth and inflation. As a result, if Governor King sees scope to expand the asset purchase program beyond the GBP 375B target, we will carry out the same setup for a short pound-dollar trade as the long position laid out above, just in reverse. 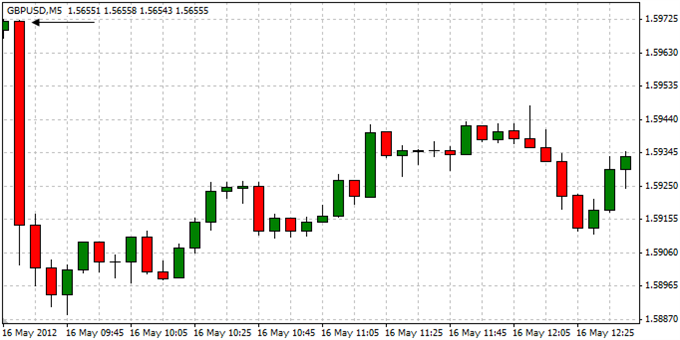 The Bank of England lowered its fundamental outlook for the U.K. as the central bank saw a renewed risk of undershooting the 2% target for inflation, and held a cautious tone for the region amid the ‘possibility of a disorderly resolution’ in the euro-area. The shift in the policy outlook dragged on the British Pound, with the GBPUSD slipping below the 1.5900 figure, but we saw the pair consolidate during the day as the pair closed at 1.5909.