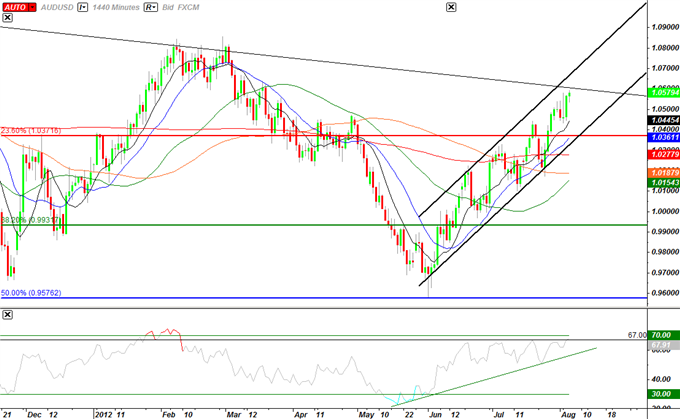 Although the Reserve Bank of Australia is widely anticipated to keep the cash rate at 3.50%, the fresh batch of central bank rhetoric is likely to spark increased volatility in the AUDUSD as market participants weigh the outlook for monetary policy. A Bloomberg News survey shows 26 of the 27 economists polled see the RBA sticking to the sidelines in August, while market participants are pricing a 16% chance for a 25bp rate cut according to Credit Suisse overnight index swaps. In turn, we’re more interested in seeing the central bank’s fundamental assessment for the $1T economy, and we will also be keeping an eye out for comments on China as it remains Australia’s largest trading partner.

The recent improvement in the housing sector paired with the ongoing rise in private sector consumption may encourage Governor Glenn Stevens to soften his dovish tone for monetary policy, and we may see the central bank head may talk down speculation for further rate cuts as the economy gets on a firmer footing. However, the RBA may keep the door open to lower borrowing costs further amid easing price pressures along with the recent weakness in the labor market, and the central bank may see scope to carry out its easing cycle throughout the remainder of the year in an effort to shield the economy from the slowdown in global growth.

As the AUDUSD maintains the upward trending channel from earlier this year, a less-dovish statement from the RBA may trigger move back towards former support around the 1.0630 figure, and the high-yielding currency may continue to retrace the sharp decline from February (1.0855) should the central bank talk down speculation for lower borrowing costs. However, if the RBA shows a greater willingness to expand monetary policy further, bets for further rate cuts may spark a sharp reversal in the exchange rate, and we may see the pair give back the rebound from June (0.9580) as interest rate expectations deteriorate.

Trading the rate decision may not be as clear cut as some of our previous traders as the RBA is widely expected to keep the benchmark interest rate on hold, but a less dovish statement could set the stage for a long Australian dollar trade as market participants scale back bets for more easing. Therefore, if the central bank turns more upbeat towards the $1T economy, we will need to see a green, five-minute candle following the announcement to generate a buy entry on two-lots of AUDUSD. Once these conditions are fulfilled, we will set the initial stop at the nearby swing low or a reasonable distance from the entry, and this risk will establish our first target. The second objective will be based on discretion, and we will move the stop on the second lot to cost once the first trade hits its mark in order to protect our profits.

In contrast, the ongoing slack within the real economy paired with the slowdown in global growth may bring about another round of dovish comments from the central bank, and we may see the Australian dollar reverse course should Governor Stevens show a greater willingness to ease monetary policy further. As a result, if the RBA talks up speculation for another rate cut, we will implement the same strategy for a short aussie-dollar trade as the long position mentioned above, just in the opposite direction.

Indeed, the Reserve Bank of Australia kept the benchmark interest rate at 3.50% in July following the ‘material easing in monetary policy over the past six months,’ but it seems as though the central bank will continue to carry out its easing cycle in 2012 as the slowdown in China – Australia’s largest trading partner – dampens the outlook for growth and inflation. The dovish tone held by the RBA dragged on the Australian dollar, with the AUDUSD slipping back below the 1.0250 figure, but the high-yielding currency regained its footing during the day to end the session at 1.0278.