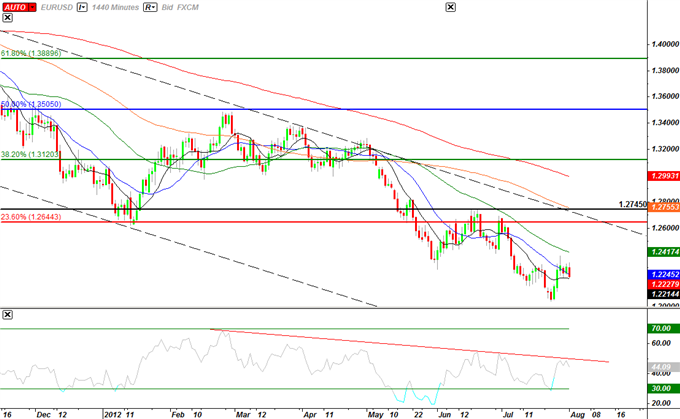 The European Central Bank is widely anticipated to keep the benchmark interest rate at 0.75% in August, but we may see President Mario Draghi show a greater willingness to reestablish the asset purchase program amid the heightening threat for contagion. However, market participants are still pricing an 83% chance for a 25bp rate cut according to Credit Suisse overnight index swaps, and we may see the Governing Council implement a range of tools over the coming months as the fundamental outlook for the region turns increasingly bleak. In turn, we may see the ECB carry its easing cycle into 2013, but there appears to be a growing rift within the central bank as Bundesbank President Jens Weidmann argues that the Governing Council should ‘not overstep its own mandate.’

As the ECB maintains its one and only mandate to ensure price stability, the stickiness in inflation may encourage the central bank to preserve its current policy in August, and we may see President Draghi try to talk down the risks surrounding the region after lowering the benchmark interest rate to a record-low during the previous. However, the ongoing weakness in the labor market paired with fears of a prolonged recession may push the Governing Council to reemploy its non-standard measures, and the committee may lean towards a zero-interest rate policy (ZIRP) as the debt crisis continues to drag on the real economy.

Indeed, the EURUSD appears to be carving out a lower high coming into August as the relative strength index preserves the downward trend from earlier this year, and the pair may continue to give back the rebound from July (1.2042) should the ECB strike a highly dovish tone for monetary policy. At the same time, the lack of momentum to tag the 50-Day SMA at 1.2417 reinforces a bearish outlook for the exchange rate, and the pair may continue to approach the 2010 low (1.1875) as the debt crisis continues to dampen investor confidence.

As the ECB is expected to keep the benchmark interest rate on hold, trading the given event risk may not be as clear cut as some of our previous trades, but the fresh batch of central bank rhetoric may pave the way for a long Euro trade should President Draghi talk down the risks surrounding the region. Therefore, if the Governing Council sees scope to keep borrowing costs on hold over the medium-term, we will need a green, five-minute candle following the meeting to generate a buy entry on two-lots of EURUSD. Once these conditions are fulfilled, we will set the initial stop at the nearby swing low or a reasonable distance from the entry, and this risk will establish our first objective. The second target will be based on discretion, and we will move the stop on the second lot to cost once the first trade hits its mark in order to protect our profits.

On the other hand, the heightening threat for contagion paired with the growing risk for a prolonged recession may lead to a very dovish ECB, and the central bank may turn increasingly cautious towards the economy amid the ongoing turmoil in the financial system. As a result, if Mr. Draghi casts a weakened outlook for the region, we will implement the same strategy for a short euro-dollar trade as the long position mentioned above, just in reverse. 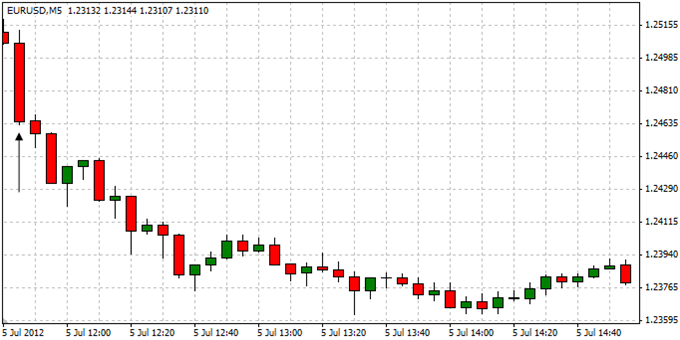 The European Central Bank lowered the benchmark interest rate by 26bp to 0.75% in July in an effort to stem the risk for a prolonged recession, but it seems as though the Governing Council will continue to embark on its easing cycle as the sovereign debt crisis continues to drag on the real economy. Indeed, the rate cut weighed on the Euro, with the EURUSD slipping below the 1.2400 figure, and the single currency struggled to hold its ground throughout the day as the pair closed at 1.2390.