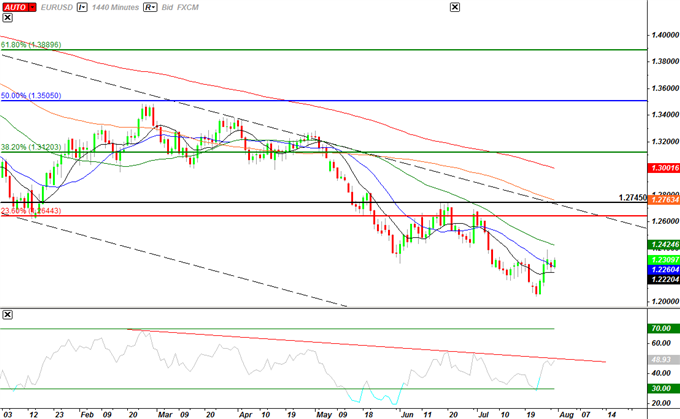 The Federal Open Market Committee is widely expected to maintain its current policy in August, but the fresh batch of central bank rhetoric may shake up the foreign exchange market as currency traders weigh the outlook for monetary policy. As the FOMC continues to carry out ‘Operation Twist,’ it seems as though the committee will maintain its current policy throughout the remainder of the year, and we may see Chairman Ben Bernanke continue to soften his dovish tone for monetary policy as the economic recovery gradually gathers pace. In turn, we may see the Fed continue to move away from quantitative easing and the central bank may start to discuss a tentative exit strategy as the economy gets on a more sustainable path.

As the stickiness in underlying price growth paired with the uptick in personal incomes raises the threat for inflation, we should see the FOMC talk down speculation for additional monetary support, and the committee may sound more hawkish this time around as the central bank sees a muted risk for a double-dip recession. However, the Fed may strike a cautious outlook for the region amid the ongoing weakness in the labor market along with the slowdown in private sector consumption, and the central bank may keep the door open to expand its balance sheet further in an effort to encourage a stronger recovery.

The relief rally in the EURUSD appears to be tapering off as the pair remains capped by the 50-Day SMA (1.2443), and the euro-dollar looks poised to weaken further as the relative strength index maintains the downward trend from earlier this year. As the euro-dollar appears to be carving out a lower top ahead of the rate decision, a less dovish Fed may trigger a sharp reversal in the exchange rate, and the pair may continue to give back the rebound from 2010 (1.1875) should the central bank talk down speculation for additional monetary support.

Trading the given event risk may not be as clear cut as some of our previous trades as the Fed sticks to its current policy, but the statement accompanying the rate decision could set the stage for a long U.S. dollar as should the central bank curb bets for QE3. Therefore, if the FOMC softens its dovish tone for monetary policy and turns increasingly upbeat towards the economy, we will need to see a red, five-minute candle following the announcement to establish a sell entry on two-lots of EURUSD. Once these conditions are met, we will set the initial stop at the nearby swing high or a reasonable distance from the entry, and this risk will generate our first objective. The second target will be based on discretion, and we will move the stop on the second lot to cost once the first trade hits its mark in order to lock-in our profits.

In contrast, the Fed may sound more cautious this time around amid the ongoing turmoil in the world economy, and the central bank may keep the door open to expand its balance sheet further in an effort to stem the downside risks for the region. As a result, if the FOMC shows a greater willingness to push through another large-scale asset purchase program, we will implement the same strategy for a long euro-dollar trade as the short position laid out above, just in the opposite direction. 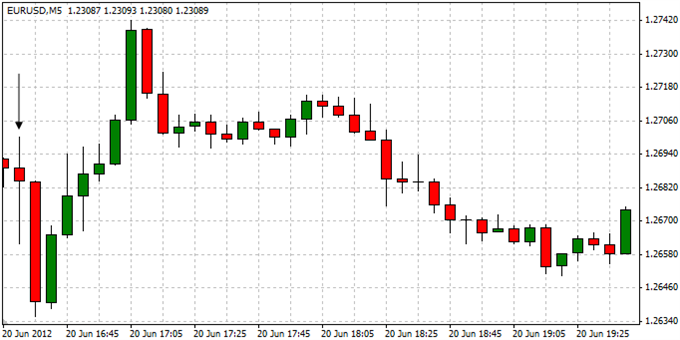 Indeed, the FOMC kept the benchmark interest rate at 0.25% in June, but announced that the committee will extend ‘Operation Twist’ until the end of 2012 in an effort to stem the ongoing slack within the real economy. The move dragged on the greenback, with the EURUSD quickly climbing back above the 1.2700 figure, and the reserve currency struggled to hold its ground throughout the day as the pair closed at 1.2704.