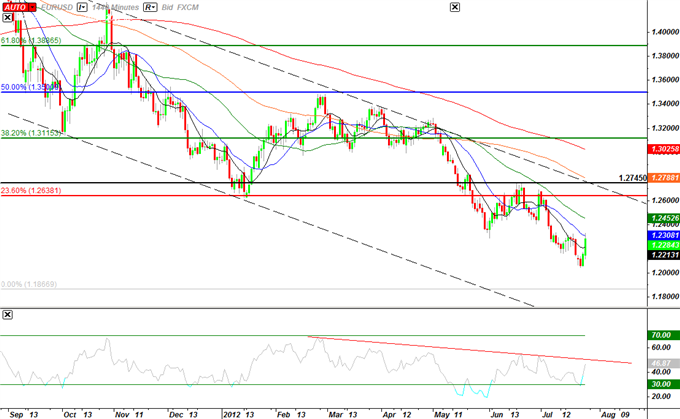 The advanced GDP report is expected to show the world’s largest economy expanding at an annual rate of 1.4% in the second quarter and the slowing recovery may drag on the U.S. dollar as it fuels speculation for another round of quantitative easing. As the Federal Reserve keeps the door open to expand its balance sheet further, a dismal growth report may encourage the central bank to push through another large-scale asset purchase program, but it seems as though the FOMC will preserve its current policy throughout the remainder of the year as the committee anticipants to see a more robust recovery over the coming months. As Fed officials see a muted risk for a double-dip recession, we should see the central bank move away from quantitative easing, and the committee may start to discuss a tentative exit strategy towards the end of the year as growth and inflation picks up.

The rebound in wage growth paired with the ongoing expansion in private sector credit may produce a stronger-than-expected GDP figure, and a faster rate of growth will reinforce our bullish outlook for the USD as the development dampens the scope for QE3. However, the protracted recovery in employment paired with the ongoing weakness in the housing market may continue to drag on the real economy, and a marked slowdown in economy activity may trigger a sharp selloff in the greenback as it fuels speculation for more quantitative easing.

As we’re expecting to see a slowing recovery in the world’s largest economy, the rebound from 1.2042 may gather pace over the next 24-hours of trading, but the lack of momentum to hold above the 20-Day SMA (1.2308) may lead to further declines in the exchange rate as the relative strength index maintains the downward trend from earlier this year. In turn, we may see the relief rally in the EURUSD taper off in the coming days, and the pair may continue to give back the rebound from 2010 (1.1875) as the sovereign debt crisis continues to sap investor confidence.

Expectations for a slower rate of growth casts a bearish outlook for the greenback, but a positive development may pave the way for a long U.S. dollar trade as it dampens expectations for QE3. Therefore, if GDP tops market forecast, we will need a red, five-minute candle following the release to generate a sell entry on two-lots of EURUSD. Once these conditions are met, we will set the initial stop at the nearby swing high or a reasonable distance from the entry, and this risk will establish our first objective. The second target will be based on discretion, and we will move the stop on the second lot to cost once the first trade hits its mark in an effort to protect our gains.

In contrast, the ongoing weakness in housing paired with the slowdown in job growth may bring about a weak GDP report, and a dismal rate may drag on the greenback as it raises speculation for additional monetary support. As a result, if the growth rate falls short of forecast, we will carry out the same strategy for a long euro-dollar trade as the short position mentioned above, just in the opposite direction. 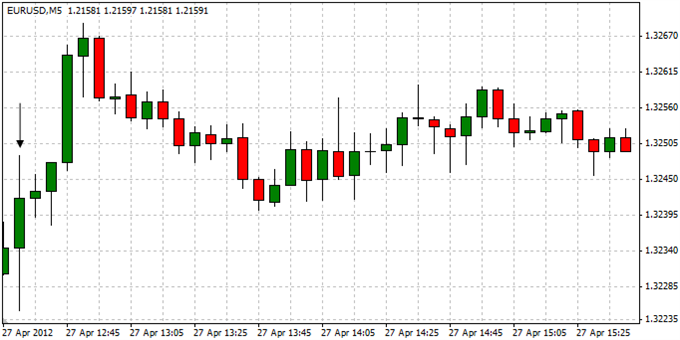 Economic activity in the U.S. increased 2.2% in the first quarter after expanding 3.0% during the last three-months of 2011, while personal consumption advanced 2.9% amid forecasts for a 2.3% print. The slower rate of growth dragged on the dollar, with the EURUSD climbing above 1.3250, but we saw the euro-dollar consolidate throughout the North American trade as the pair ended the day at 1.3248.