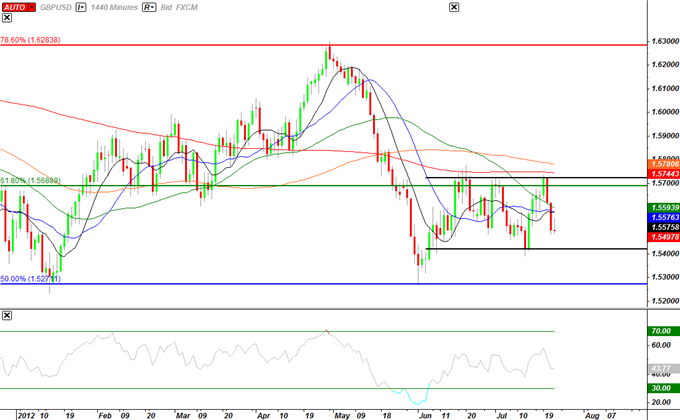 The advance GDP report is expected to show the U.K. contracting another 0.2% in the second quarter and the deepening recession may product a sharp selloff in the British Pound as it raises the scope for additional quantitative easing. As the economic downturn raises the risk of undershooting the 2% target for inflation, we may see the Bank of England continue to strike a dovish tone for monetary policy, and the central bank may show a greater willingness to expand its balance sheet further in an effort to stem the downside risks for the region.

The rise in business outputs paired with the ongoing expansion in private sector credit may generate a positive GDP report for the U.K., and a better-than-expected print may instill a bullish outlook for the sterling as it dampens the scope for more QE. However, the slowdown in private sector consumption along with the ongoing weakness in the labor market may continue to drag on the growth rate, and a dismal GDP report may lead the British Pound to give back the rebound from June (1.5267) as it fuels speculation for additional asset purchases.

As the 2Q GDP report takes center stage, the fresh batch of data may threaten the range-bounce price action from the previous month, and we may see the GBPUSD may make another run at the 50.0% Fibonacci retracement from the 2009 low to high around 1.5270 should the data fuel fears for a prolonged recession. However, as the pound-dollar carves out a higher low in July, a better-than-expected print should spur a rally in the GBPUSD, and we may see the pair make a meaningful break above the 200-Day SMA (1.5744) as market participants scale back expectations for additional monetary support.

Projections for another economic contraction certainly casts a bearish outlook for the sterling, but a positive development may pave the way for a long British Pound trade as it dampens the scope for more QE. Therefore, if we see the GDP report top market expectations, we will need a green, five-minute candle following the release to establish a buy entry on two-lots of GBPUSD. Once these conditions are fulfilled, we will set the initial stop at the nearby swing low or a reasonable distance from the entry, and this risk will generate our first target. The second objective will be based on discretion, and we will move the stop on the second lot to cost once the first trade hits its mark in order to protect our gains.

In contrast, the ongoing slack within the real economy paired with the slowdown in private sector consumption may produce a marked decline in the growth rate, and fears of a deepening recession may spark a sharp selloff in the exchange rate as it fuels speculation for additional easing. As a result, if the economy contracts 0.2% or greater, we will implement the same strategy for a short pound-dollar trade as the long position laid out above, just in the opposite direction. 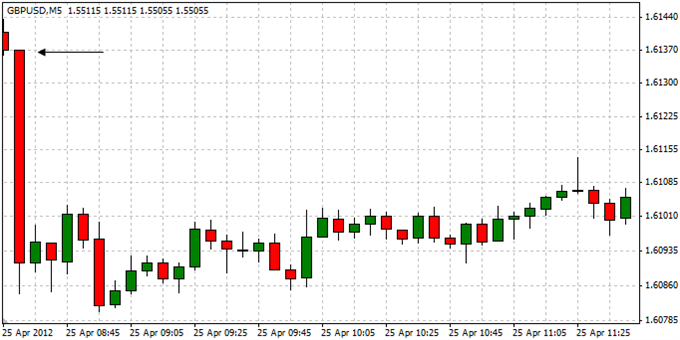 Economic activity in the U.K. unexpectedly weakened another 0.2% during the second-quarter, which puts Britain in its first double-dip recession since the 1970’s, and the weakening outlook for the region may lead the Bank of England to ease monetary policy further as it aims to encourage a sustainable recovery. The British Pound sold off following the dismal print, with the GBPUSD slipping below the 1.6100 figure, but the sterling regained its footing during the North American trade as the pair ended the day at 1.6161.