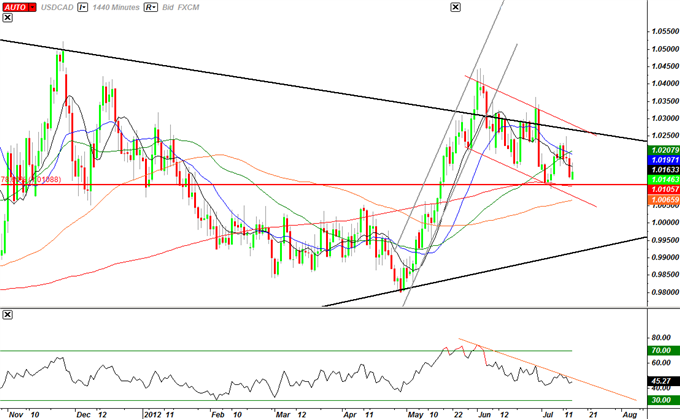 Although the Bank of Canada is widely expected to keep the benchmark interest rate at 1.00% in July, the fresh batch of central bank rhetoric may prop up the Canadian dollar as the central bank talks up speculation for higher borrowing costs. Indeed, BoC Governor Mark Carney may fuel speculation for a rate hike as the central bank head tries to combat the record-rise in household debt, but the central bank head may sound more dovish this time around amid the slowing recovery in the U.S. economy – Canada’s largest trading partner. In turn, we still see little scope for a series a rate hikes from the BoC, and the bank may have little choice but to carry its wait-and-see approach in to 2013 as the slowdown in the world economy dampens the outlook for growth.

The BoC may show a greater willingness to lift the benchmark interest rate from 1.00% amid the threat of a housing bubble paired with the ongoing expansion in the labor market, and Governor Carney may sound a bit more hawkish this time around as the record-rise in household indebtedness presents the greatest domestic threat to the economy. However, the slowdown in global trade paired with the drop in private sector consumption may encourage the central bank to stick to its current policy, and Mr. Carney may no longer see scope to raise borrowing costs as growth and inflation falter.

As the USDCAD continues to hold above the 78.6% Fibonacci retracement from the 2007 low to the 2009 high around 1.0100-10, the pair appears to be carving out a higher low in July, and the bullish flag formation may continue to take shape should the BoC talk down speculation for rate hike. However, as the relative strength index maintains the downward slope from June, the oscillator needs to breakout of its current trend to see a meaningful run to the upside. For a complete outlook including scalp targets on the USDCAD ahead of tomorrow's rate decision, refer to Michael Boutros’ Winners & Losers report.

Beyond the rate decision, we will be closely watching the accompanying statementas it promises to spur volatility, and we may see the Canadian dollar outperform against its U.S. counterpart should the BoC continue to lean towards a rate hike. Therefore, if Governor Carney continues to push for higher borrowing costs, we will need to see a red, five-minute candle following the rate decision to establish a sell entry on two-lots of USDCAD. Once these conditions are met, we will set the initial stop at the nearby swing high or a reasonable distance from the entry, and this risk will generate our first objective. The second target will be based on discretion, and we will move the stop on the second lot to breakeven once the first trade hits its mark in order to preserve our profits.

In contrast, the downturn in global trade paired with the slump in private sector consumption may encourage the BoC to maintain its current policy in July, and the central bank may talk down speculation for a rate hike amid the slowing recovery in the world economy. As result, if Mr. Carney sounds increasingly dovish, we will implement the same strategy for a long dollar-loonie trade as the short position laid out above, just in the opposite direction.

As expected, the Bank of Canada kept the benchmark interest rate at 1.00% amid the ongoing turmoil in the world economy, but continued to float the idea for higher borrowing costs in an effort to combat the record-rise in household indebtedness. Indeed, growing bets for a rate hike propped up the Canadian dollar, with the USDCAD slipping below the 1.0400 figure, but we saw the pair consolidate during the North American trade as the pair ended the day at 1.0377.