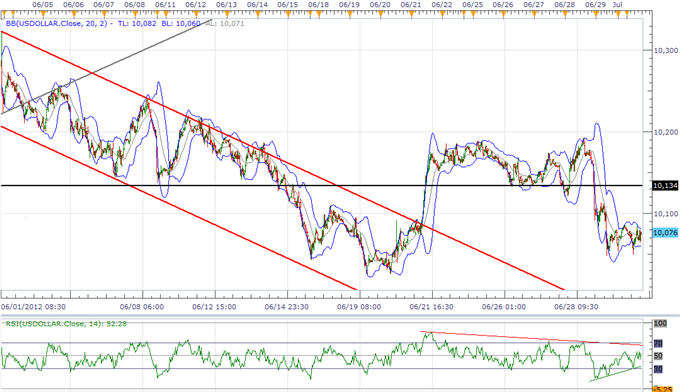 USD To Consolidate Ahead Of NFPs, AUD At Risk Amid Dovish RBA

The Dow Jones-FXCM U.S. Dollar Index (Ticker: USDollar) is 0.12 percent higher from the open after moving 59 percent of its average true range, and the greenback may track sideways ahead of the highly anticipated U.S. Non-Farm Payrolls report as market participants weigh the outlook for the world’s largest economy. As the dollar continues to trade above the June low (10,025), we should see the index maintain the range carried over from June, and the greenback may work its way back towards the 10,200 figure as the 30-minute relative strength index bounces back from oversold territory. In turn, we will keep a close eye on the 175 point range, but we remain fairly bullish against the USD as it appears to be carving a higher low coming into July. 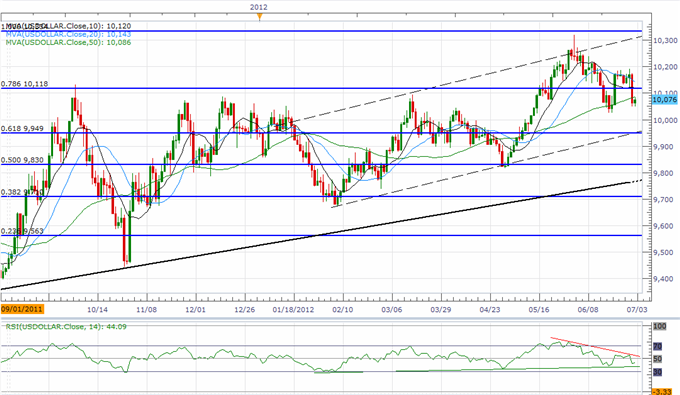 Although the U.S. ISM report struck a weakened outlook for the world’s largest economy, we continue to see limited scope for another asset purchase program as the stickiness in underlying price growth raises the risk for inflation. In light of the recent rhetoric coming out of the central bank, it seems as though extending ‘Operation Twist’ is the last leg in the Fed’s easing cycle, and we may see the FOMC start to discuss a tentative exit strategy as the region gets on a more sustainable path. As the index appears to be carving a higher low coming into July, we should see the upward trending continue to take shape in the second-half of the year, but we will be keeping a close eye on the relative strength index as there appears to be wedge pattern in the oscillator. Indeed, the employment report on tap for Friday may produce a significant break in the dollar as the labor market is expected to add another 90K jobs in June, but a string of dismal developments may spark a sharp selloff in the greenback as it fuels speculation for QE3.

The greenback advanced against three of the four counterparts, led by a 0.75 percent decline in the Euro, while the Australian dollar lose weakened 0.08 percent ahead of the Reserve Bank of Australia interest rate decision. Although the RBA is widely expected to keep the benchmark interest rate at 3.50 percent in July, market participants are still calling for 75+bp worth of rate cuts for the next 12-months according to Credit Suisse overnight index swaps, and the high-yielding currency may struggle to hold its ground over the next 24-hours of trading should the central bank continue to strike a very dovish tone for monetary policy. Indeed, we may see Governor Glenn Stevens keep the door open for additional monetary support as the slowdown in China – Australia’s largest trading partner – dampens the outlook for growth, and we may see the AUDUSD carve out a lower top this month as it fails to maintain the upward trend from the previous month. In turn, we may see the aussie-dollar give back the advance from the previous week, and the pair may work its way back towards the 38.2 percent Fibonacci retracement from the 2010 low to the 2011 high around 0.9920-30 to test for interim support.