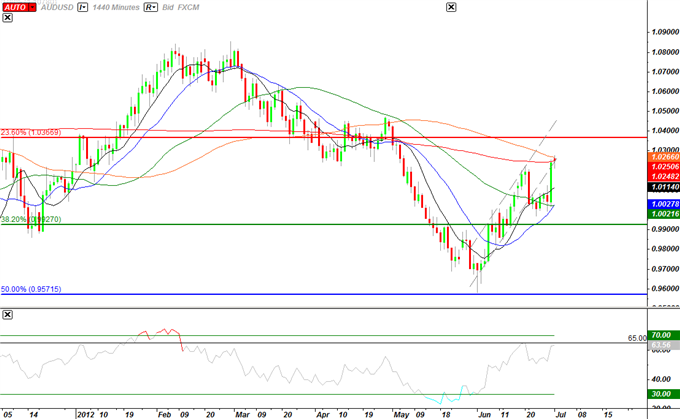 Although the Reserve Bank of Australia is widely expected to keep the benchmark interest rate at 3.50%, the statement accompanying the rate decision may drag on the AUDUSD should the central bank keep the door open to expand policy further. As the sovereign debt crisis paired with the slowdown in China becomes a growing concern for the RBA, we should see Governor Glenn Stevens continue to strike a dovish tone for monetary policy, and the central bank head may talk up speculation for lower borrowing costs in an effort to encourage a stronger recovery. According to Credit Suisse overnight index swaps, market participants are still looking for 75+bp worth of rate cuts over the next 12-months, and the Australian dollar may face additional headwinds in the second-half of the year as interest rate expectations remain tilted to the downside.

The ongoing improvement in private sector activity paired with the stronger rate of growth may encourage the RBA to strike an improved outlook for the $1T economy, and a less dovish statement may prop up the high-yielding currency as market participants scale back speculation for lower borrowing costs. However, slowing inflation paired with the persistent weakness in the housing market may push the central bank to carry out its easing cycle throughout the second-half of the year, and Governor Stevens may see scope to lower the interest rate further in an effort to stem the downside risks surrounding the region.

As the AUDUSD struggles to maintain the upward trend from June, the pair could be carving out a lower high just below the 1.0300 figure, and we will closely watching the relative strength in the coming days as it approaches interim resistance around the 65 figure. As we expect the RBA to strike a dovish tone for monetary policy, we should see the AUDUSD give back the rebound from June, and the meeting could serve as a catalyst to spark a move back towards the 38.2% Fibonacci retracement from the 2010 low to the 2011 high around 0.9920-30 as currency traders look for lower borrowing costs.

Trading the given event risk may not be as clear cut as some of our previous traders as the RBA is widely expected to keep the benchmark interest rate on hold, but a less dovish statement could pave the way for a long Australian dollar trade as it reduces the scope for another series of rate cuts. Therefore, Governor Stevens raises his outlook for the region and curbs bets for lower borrowing costs, we will need a green, five-minute candle following the decision to establish a buy entry on two-lots of AUDUSD. Once these conditions are met, we will place the initial stop at the nearby swing low or a reasonable distance from the entry, and this risk will generate our first target. The second objective will be based on discretion, and we will move the stop on the second lot to breakeven once the first trade hits its mark in an effort to lock-in our gains.

On the other hand, the RBA may sound increasingly cautious as the outlook for global growth deteriorates, and fears of a ‘hard landing’ in China – Australia’s largest trading partner – may lead the central bank to ease policy further in an effort to shield the $1T economy. As a result, if the central bank unexpectedly cuts rates or shows a greater willingness to bring down the cash rate, we will implement the same strategy for a short aussie-dollar trade as the long position mentioned above, just in the opposite direction.

As expected, the Reserve Bank of Australia lowered the benchmark interest rate by another 25bp in June to 3.50% and kept the door open to expand monetary policy further as the ongoing turmoil in Europe paired with the slowdown in China dampens the outlook for growth. Although the initial reaction in the AUDUSD was short-lived, we saw the Australian dollar struggle to holds its ground throughout the day as the pair ended the session at 0.9793.