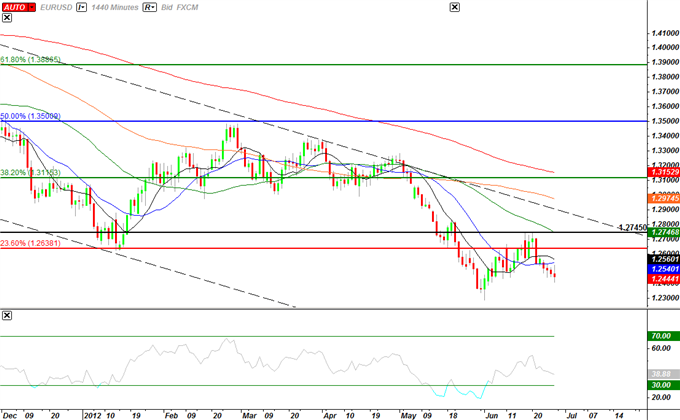 German retail sales are expected to climb another 0.2% in May and the ongoing improvement in private sector consumption may prop up the EURUSD as it instills an improved outlook for the euro-area. As Europe’s largest economy leads the recovery, a positive development may encourage the European Central Bank to maintain its current policy in July, but the Governing Council may have little choice but to carry out its easing cycle throughout the second-half of the year in order to stem the risks for a prolonged recession.

According to a survey by Bloomberg News, 16 of the 24 economists polled are looking for at least a 25bp rate cut next week, and ECB President Mario Draghi may continue to strike a dovish tone for monetary policy as the debt crisis continues to drag on the real economy. However, as the EU concludes to summit in Brussels, market participants may show a muted reaction to the data print, and headlines coming out of the meeting may spark increased volatility across the major currencies as European policy makers increase their effort to address the ongoing turmoil in the financial system.

The rebound in household sentiment paired with the rise in economic activity may encourage households to increase their rate of consumption, and a positive development may spark a relief rally in the Euro as it raises the outlook for growth. However, the slowdown in the labor market along with fears of prolonged recession may drag on private sector spending, and an dismal report may spark a bearish reaction in the EURUSD as it fuels speculation for an ECB rate cut.

The medium-term outlook for the EURUSD remains bearish as it maintains the downward trend carried over from 2011, and the pair looks poised to push lower over the remainder of the month as it carves out a lower top in June. In turn, we should see the euro-dollar continue to retrace the rebound from 1.2287, but we anticipate to see fresh yearly lows in the exchange rate as the fundamental outlook for the region turns increasingly bleak.

Expectations for a third consecutive rise in retail sales favors a bullish outlook for the single currency, and the market reaction may pave the way for a long Euro trade as it dampens speculation for an ECB rate cut. Therefore, if spending increases another 0.2% or greater in May, we will need to see a green, five-minute candle following the release to generate a buy entry on two-lots of EURUSD. Once these conditions are fulfilled, we will set the initial stop at the nearby swing low or a reasonable distance from the entry, and this risk will establish our first objective. The second target will be based on discretion, and we will move the stop on the second lot to breakeven once the first trade hits its mark in order to protect our profits.

In contrast, the rise in unemployment paired with fears of a prolonged economic downturn may push households to scale back on consumption, and a dismal print may fuel speculation for a rate cut as the outlook for growth and inflation deteriorates. As a result, if the data falls short of market expectations, we will implement the same strategy for a short euro-dollar trade as the long position laid out above, just in reverse. 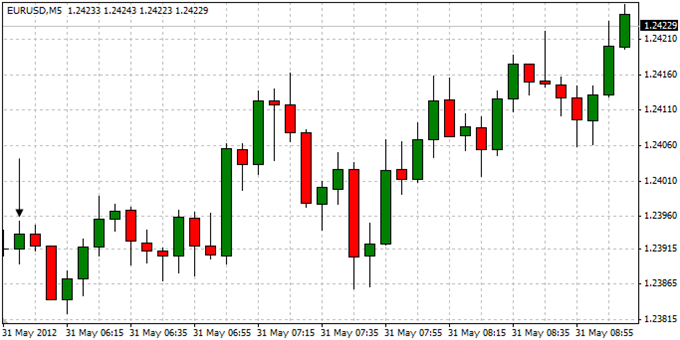 Household consumption in Germany increased another 0.6% after expanding 2.1% in March, led by a 7.0% rise in demands for inflation technology, while discretionary spending on clothing and shoes slipped 6.1% during the same period. The initial reaction was fairly muted, with the EURUSD holding below the 1.2400 figure, but the single currency struggled to hold its ground as the pair ended the day at 1.2364.