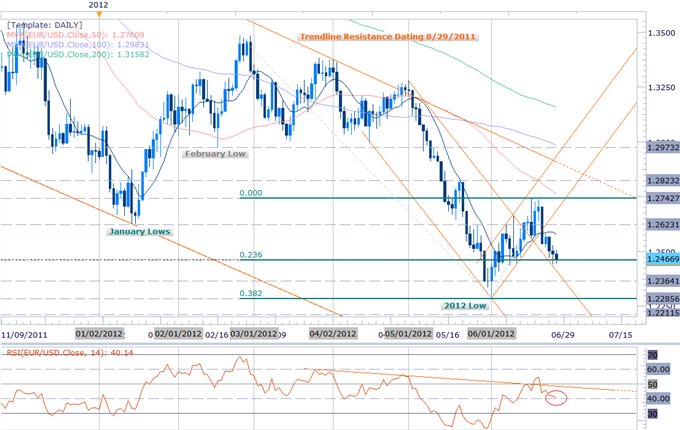 Unemployment in Europe’s largest economy is expected to increase 3K in June and the slowing recovery may drag on the EURUSD as it raises the risk for a prolonged recession in the euro-area. As the fundamental outlook for the region turns increasingly bleak, there’s growing speculation that the European Central Bank will carry out its easing cycle throughout 2012, and we may see the Governing Council push the benchmark interest rate below 1.00% in an effort to stem the downside risks for growth and inflation. However, as the EU Summit in Brussels takes center stage, we may see a muted response to the data, and the headlines coming out of the meeting may have larger implications for short-term price action as European policy makers increase their effort to address the debt crisis.

The resilience in foreign demands paired with the ongoing improvement in private sector consumption may encourage businesses to increase hiring, and a positive development may spur a relief rally in the EURUSD as instills an improved outlook for growth. However, the drop in business sentiment along with the slowdown in production certainly limits the scope of seeing a large decline in unemployment, and a dismal report may fuel speculation for a rate cut in July as the region faces an increased threat for a prolonged economic downturn.

A look at the encompassing structure sees the euro trading within the confines of a broad descending channel formation dating back to the August highs with a break below an embedded ascending channel formation last week prompting a decline to the 23.6% Fibonacci extension taken from the February and June highs at 1.2460. Interim daily support rests here with a break below eying subsequent daily targets at 1.2365 and the 38.2% extension at 1.2285. Daily resistance now stands at the former January lows at 1.2623 with only a breach above the June 20th high at 1.2742 invalidating our bearish bias. 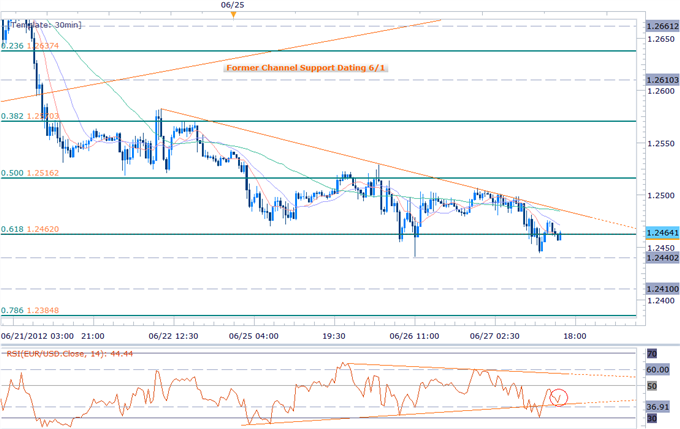 The 30min scalp chart shows the EURUSD continuing to straddle the key 61.8% Fibonacci retracement taken from the June advance at 1.2460. Note that this level coincides with the 23.6% extension depicted on our daily chart and offers further conviction on short positioning with a break below. Subsequent support targets are seen lower at 1.2440, 1.2410, and the 78.6% retracement at 1.2385. Topside advances are governed by short-term trendline resistance with a breach above eyeing ceilings at 1.2515, the 38.2% retracement at 1.2570, and 1.2610. Should the print prompt a bearish euro response, look to target downside levels with a daily RSI break back below 40 offing further conviction on our directional bias.

Forecasts for a rise in unemployment casts a bearish outlook for the single currency, but a positive development may set the stage for a long Euro trade as it dampens speculation for additional monetary support. Therefore, if we see an unexpected improvement in the labor market, we will need to see a green, five-minute candle following the print to establish a buy entry on two-lots of EURUSD. Once these conditions are fulfilled, we will place the initial stop at the nearby swing low or a reasonable distance from the entry, and this risk will generate our first objective. The second target will be based on discretion, and we will move the stop on the second lot to breakeven once the first trade hits its mark in an effort to protect our gains.

However, the drop in production paired with fears of a prolong recession certainly does not bode well for hiring, and we may see the single currency struggle to hold its ground should the report cast a weakened outlook for Europe’s largest economy. As a result, if we see unemployment increase for the third time in 2012, we will carry out the same setup for a short euro-dollar trade as the long position mentioned above, just in the opposite direction. 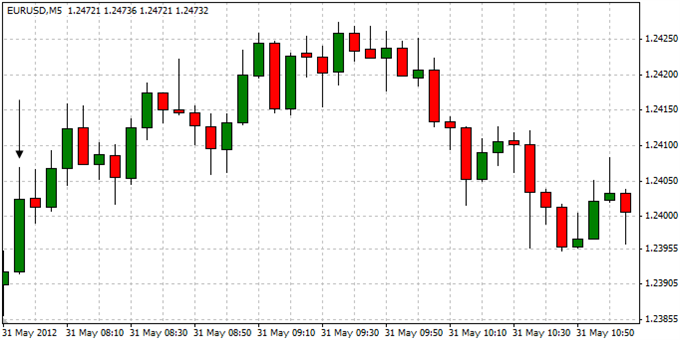 German unemployment held flat in May after increasing a revised 18K the month prior, while the jobless rate unexpectedly narrowed to 6.7% from 6.8% to mark the lowest reading since the series began in 1991. The drop in the unemployment rate propped up the Euro, with the EURUSD pushing back above the 1.2400 figure, but the market reaction was short-lived as the pair gave back the advanced and ended the day at 1.2364.