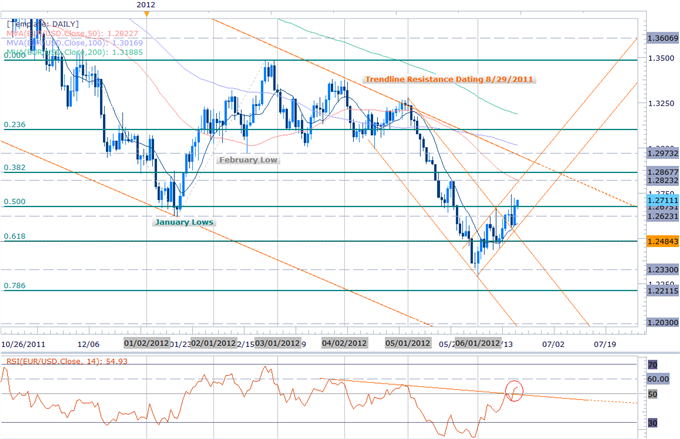 Although the Federal Open Market Committee is widely expected to maintain its current policy in June, the fresh batch of central bank rhetoric may prop up the U.S. dollar should Chairman Ben Bernanke continue to soften his dovish tone for monetary policy. As the world’s largest economy gets on a more sustainable path, we should see the FOMC move away from its easing cycle, and the committee may continue to strike an improved outlook for the region as the recovery gradually gathers pace.

As private sector activity picks up, the stickiness in underlying inflation may encourage the FOMC to draw a more balanced tone for monetary policy, and we may see a bullish reaction in the U.S. dollar as market participants scale back bets for another round on quantitative easing. However, the Fed may keep the door open to expand its balance sheet further amid the ongoing weakness in the housing market paired with the protracted recovery in employment, and the committee may sound more cautious this time around as the sovereign debt crisis continues to pose a threat to the global financial system. In turn, we may see the EURUSD continue to retrace the sharp decline from May, and the greenback may face additional headwinds over the near-term should Mr. Bernanke show a greater willingness to ease policy further.

A look at the encompassing structure sees the EURUSD trading within a broad descending channel formation dating back to August with the pair trading just above the 50% Fibonacci extension taken from the October and February crests at 1.2675. An embedded ascending channel formation has governed price action since the June 1st low with a break below channel support at eyeing daily support at the 61.8% extension at 1.2485. A breach above interim daily resistance at 1.2746 (Sunday high) eyes topside targets at 1.2823 and the 38.2% extension at 1.2868. Only a breach above the February low at 1.2973 dispels further downside pressure with such a scenario invalidating our medium-term bias. 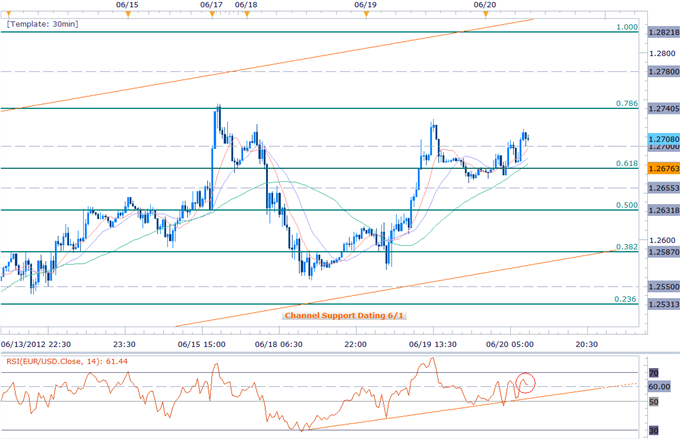 Our 30min scalp chart shows the EURUSD trading just above soft support at the 1.27-handle with subsequent floors seen at the 61.8% Fibonacci extension taken from the June 1st and 12th troughs at 1.2675 (confluence of 50% Ext on the daily chart), 1.2655, the 50% extension at 1.2630 and the confluence of channel support and the 38.2% extension at 1.2587. A break below this level risks substantial euro losses with targets eyed lower at 1.2550 and the 23.6% extension at 1.2530. Interim resistance stands at the 78.6% extension at 1.2740 backed by 1.2780 and the 100% extension at 1.02820. Should the release prompt a bullish dollar reaction, look to target downside levels with a break below channel support offering further conviction on our directional bias. If Bernanke does open the door to more easing, look for the dollar to come under substantial pressure with such a scenario putting our topside targets in play.

As Fed Chairman Bernanke is scheduled to speak at 18:15 GMT, trading the interest rate decision may not be as clear cut as some of our previous trades, but the statement accompanying the rate announcement may set the stage for a long U.S. dollar trade should the central bank head strike an improved outlook for the region. Therefore, if the FOMC continues to soften its dovish tone for monetary policy, we will need a red, five-minute candle subsequent to the announcement to establish a sell entry on two-lots of EURUSD. Once these conditions are met, we will set the initial stop at the nearby swing high or a reasonable distance from the entry, and this risk will generate our first objective. The second target will be based on discretion, and we will move the stop on the second lot to cost once the first trade hits its mark in an effort to lock-in our gains.

In contrast, the Fed may sound more cautious this time around as the fundamental outlook remains clouded with high uncertainty, and the committee may lean towards more easing in order to further insulate the economy from the debt crisis. As a result, if the FOMC shows a greater willingness to expand its balance sheet further, we will implement the same strategy for a long euro-dollar trade as the short position laid out above, just in the opposite direction. 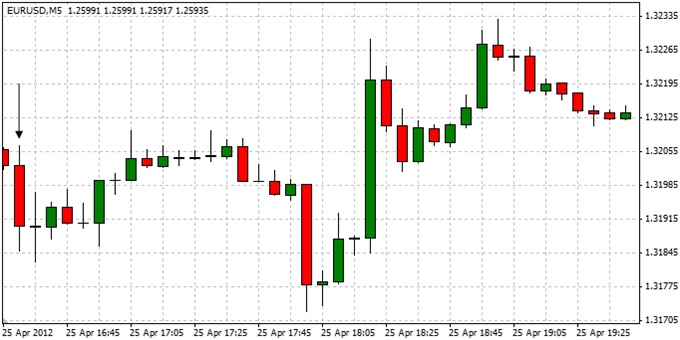 As expected, the Federal Open Market Committee preserved its wait-and see- approach in April amid the ongoing slack in the real economy, but kept the door open to expand monetary policy further as the central bank sees a ‘moderate’ recovery on the horizon. Indeed, the initial rally in the dollar was short-lived as the EURUSD climbed back above the 1.3200 figure, and the greenback struggled to hold its ground throughout the North American trade as the pair settled at 1.3215.