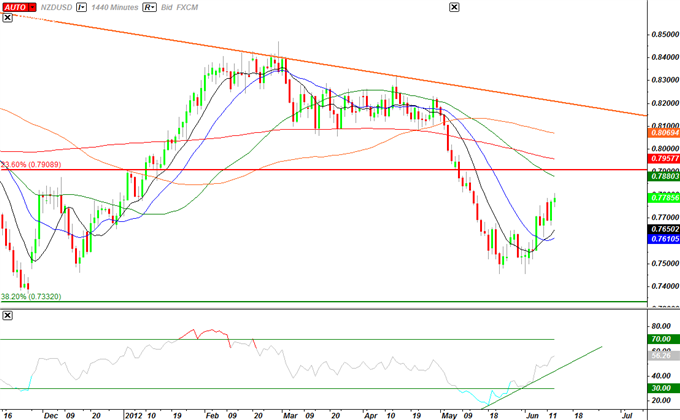 Although the Reserve Bank of New Zealand is widely expected to keep the benchmark interest rate at 2.50% in June, the statement accompanying the decision may increase the appeal of the New Zealand dollar should the central bank talk down speculation for a rate cut. As the RBNZ sees the rebuilding efforts from the Christchurch earthquake strengthening the recovery, the central bank may remain upbeat towards the economy, and Governor Alan Bollard may endorse the wait-and-see approach throughout 2012 as the outlook for growth and inflation picks up.

The rise in private sector activity paired with the ongoing improvement in the labor market may encourage the RBNZ to strike a balanced outlook for monetary policy, and we may see the NZDUSD ultimately make a run at the 0.8000 figure as currency traders scale back speculation for lower borrowing costs. However, as the slowdown in global trade paired with contraction in household consumption dampens the outlook for a stronger recovery, Governor Bollard may sound more dovish this time around, and the central bank head may show an increased willingness to expand monetary policy further in an effort to stem the downside risks for the region. In turn, we may see the NZDUSD give back the rebound from earlier this month, and the pair may come up against 0.7400 as market participants raise bets for a rate cut.

Although the medium-term outlook for the NZDUSD remains bearish, we may see the correction in the exchange rate gather pace should the RBNZ talk down speculation for lower borrowing costs. In turn, a bullish response to the rate decision may produce a run at the 23.6% Fibonacci retracement from the 2009 low to the 2011 high around 0.7900. However, as the debt crisis continues to pose a threat to the world financial system, a dovish policy statement could spark a selloff in the exchange rate, and the kiwi-dollar may come up against the 10-Day SMA at 0.7650 as market participants increase bets for a rate cut.

Trading the given event risk may not be as clear cut as some of our previous as the RBNZ keeps the cash rate on hold, but fresh batch of central bank rhetoric may pave the way for a long New Zealand dollar trade should the Mr. Bollard curb expectations for lower borrowing costs. Therefore, if the governor strikes a balanced tone for monetary policy and endorses a wait-and-see approach, we will need to see a green, five-minute candle following the announcement to establish a buy entry on two-lots of NZDUSD. Once these conditions are fulfilled, we will set the initial stop at the nearby swing low or a reasonable distance from the entry, and this risk will generate our first target. The second objective will be based on discretion, and we will move the stop on the second lot to cost once the first trade hits its mark in order to preserve our profits.

In contrast, the ongoing slack in the real economy paired with the slowdown in global trade may lead the RBNZ to strike a dovish outlook for monetary policy, and the central bank may turn increasingly cautious towards the region amid the uncertainties surrounding the fundamental outlook. As a result, if Governor Bollard shows a greater willingness to lower borrowing costs further, we will carry out the same setup for a short kiwi-dollar trade as the long position laid out above, just in the opposite direction. 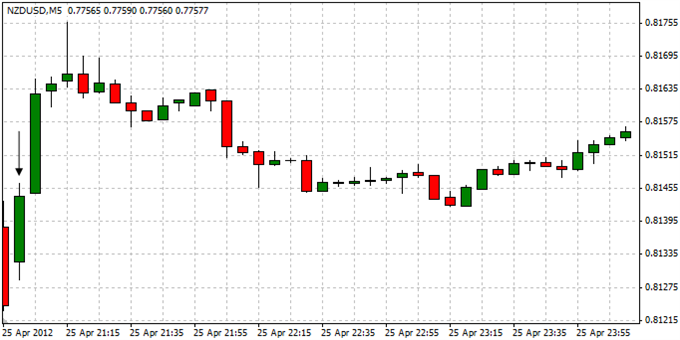 Indeed, the Reserve Bank of New Zealand held the benchmark interest rate at 2.50% in April, but went onto say that ‘the bank would need to reassess the outlook for monetary policy settings’ as the persistent strength in the local currency continues to dampen the prospects for an export-led recovery. Nevertheless, the New Zealand dollar pushed higher following the announcement, with the NZDUSD climbing back above 0.8150, but we saw the pair consolidate throughout the day to settle at 0.8147.