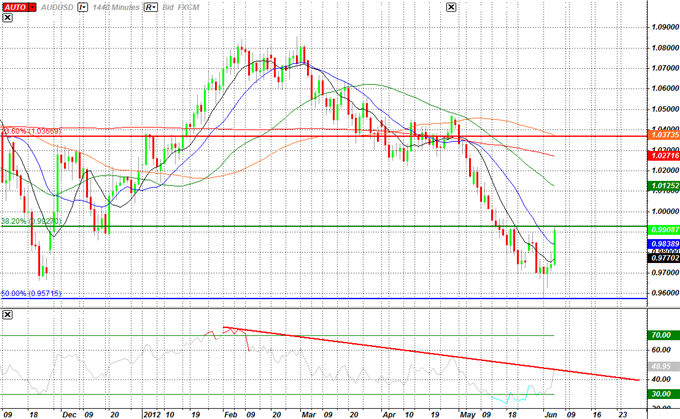 Job creation in Australia is expected to hold flat in May, but a deviation from market expectations would spur increased volatility in the AUDUSD as market participants weigh the outlook for monetary policy. As the Reserve Bank of Australia keeps the door open to expand monetary policy further, market participants are still looking for another 100bp worth of rate cuts over the next 12-months according to Credit Suisse overnight index swaps, and a dismal employment report may drag on the exchange rate as it fuels speculation for lower borrowing costs. However, the recent pickup in part-time positions may ultimately produce a stronger-than-expected print, and a positive development may push the AUDUSD back towards parity as it dampens expectations for more easing.

The rise in business investments paired with the pickup in private sector activity certainly bodes well for the labor market, and a rise in employment may generate a bullish reaction in the AUDUSD as it curbs expectations for more rate cuts. However, the slowdown in private sector consumption paired with weakening trade conditions may push businesses to scale back on hiring, and we may see the RBA take additional steps to shore up the ailing economy as it aims to encourage a stronger recovery. In turn, the recent rebound in the aussie-dollar may be short-lived as the pair may face sideways price action over the remainder of the week as the central bank preserve a dovish tone for monetary policy.

The short-term rebound in the AUDUSD looks poised to gather pace as the relative strength index continues to come off of oversold territory, but the lack of momentum to push back above the 50.0% Fibonacci retracement from the 2010 low to the 2011 high around 0.9930 may keep the oscillator in the downward trend carried over from earlier this year. In turn, the employment report could heavily influence the technical outlook for the AUDUSD as the exchange rate stands at a critical juncture, and we would need to see an upbeat report to see the rebound from 0.9580 turn into a larger correction. For a complete outlook including scalp targets on the AUDUSD ahead of tomorrow's print, refer to today’s scalp report.

We would need to see a deviation from market expectations to see a tradable event, and a better-than-expected print could pave way for a long Australian dollar trade as it dampens speculation for additional monetary support. Therefore, if we see a rise in employment, we will need a green, five-minute candle following the release to establish a long entry on two-lots of AUDUSD. Once these conditions are met, we will set the initial stop at the nearby swing low or a reasonable distance from the entry, and this risk will generate our first target. The second objective will be based on discretion, and we will move the stop on the second lot to cost once the first trade hits its mark in order to lock-in our gains.

On the other hand, fears of a slower recovery paired with the downturn in global trade may drag on the labor market, and the rebound in the AUDUSD may be short-lived should the labor report heighten speculation for more easing. As a result, if hiring ebbs in May, we will carry out the same setup for a short aussie-dollar trade as the long position laid out above, just in the opposite direction. 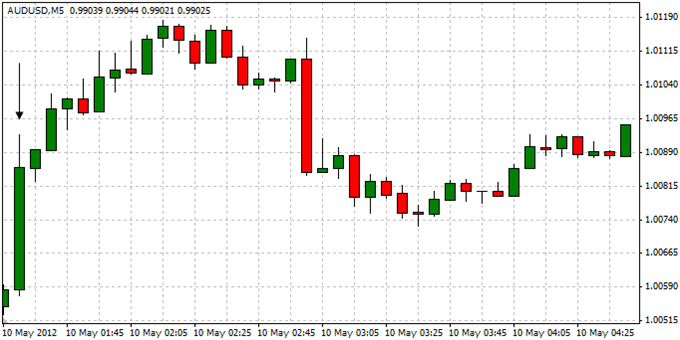 Australia unexpectedly added 15.5K jobs in April following a 37.6K expansion in the previous month, while the jobless rate slipped to 4.9% from 5.2% as discouraged workers left the labor force. The above-forecast print propped up the Australian dollar, with the AUDUSD climbing back above the 1.0100 figure, but we saw the high-yielding currency consolidate throughout the day to close at 1.0077.