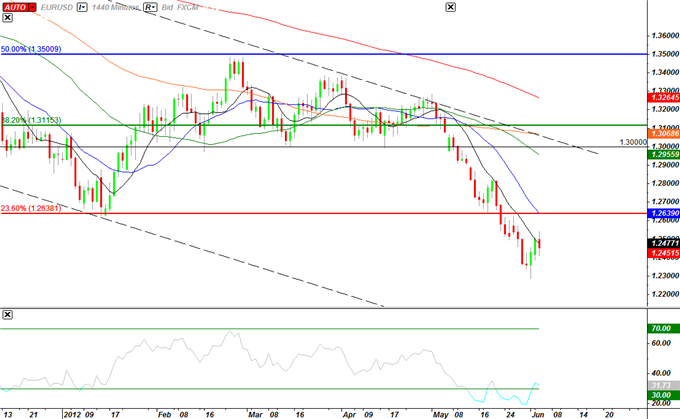 Although the European Central Bank is widely expected to maintain its current policy in June, the fresh batch of central bank rhetoric is likely to spark increased volatility in the EURUSD as market participants see the Governing Council taking additional steps in an effort to stem the threat for contagion. As the EU struggles to meet on common ground and maintains a reactionary approach in tackling the debt crisis, the ECB may sound more dovish this time around, but we may see the central bank continue to endorse a wait-and-see approach as the governments operating under the fixed-exchange rate system become increasingly reliant on monetary support.

As the ECB takes note of the gradual recovery in the real economy, the central bank may continue to talk down speculation for more easing, and a less dovish statement may pave the way for a short-term correction in the EURUSD as interest rate expectations pick up. However, as the ongoing weakness in private sector activity raises the risk for a muted recovery, the Governing Council may show a greater willingness to shore up the ailing economy, and the central bank may carry out its easing cycle throughout 2012 as outlook for growth remains tilted to the downside. In turn, we may see the EURUSD give back the rebound from the previous week, and the pair may continue to tag fresh yearly lows over the near-term as the heightening risk for contagion continues to drag on investor confidence.

As the EURUSD maintains the downward trend carried over from 2011, we will maintain our bearish forecast for the single currency, but the pair looks poised for a move higher as the relative strength index bounces from oversold territory. In turn, a less dovish ECB may turn the rebound from 1.2287 into a larger correction, and the pair may work its way back above the 23.6% Fibonacci retracement from the 2009 high to the 2010 low around 1.2640-50 as it dampens expectations for additional support. However, as the EURUSD lacks momentum to put in a close above the 10-Day SMA (1.2476), the headline-driven market may continue to push the exchange rate lower, and we may see the pair make another run at the 1.2200 figure should President Draghi show an increased willingness to further expand monetary policy.

Trading the given event risk may not be as clear cut as our previous trades, but the policy statement could set the stage for a long Euro trade should the central bank strike an improved outlook for the region. Therefore, if the ECB curbs speculation for more easing, we will need to see a green, five-minute candle following the announce to establish a buy entry on two-lots of EURUSD. Once these conditions are met, we will set the initial stop at the nearby swing low or a reasonable distance from the entry, and this risk will generate our first target. The second objective will be based on discretion, and we will move the stop on the second lot to cost once the first trade hits its mark in order to preserve our profits.

On the other hand, fears of a prolonged recession paired with the growth threat for contagion may encourage the Governing Council to take additional steps to address the risks surrounding the region, and the central bank may sound more dovish this time around as the EU struggles to restore investor confidence. As a result, if the ECB shows a greater willingness to provide more monetary assistance, we will implement the same strategy for a short euro-dollar trade as the long position mentioned above, just in reverse. 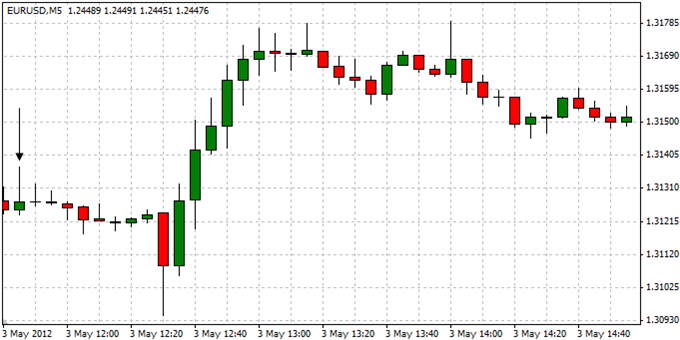 As expected, the European Central Bank kept the benchmark interest rate at 1.00%, but we saw President Mario Draghi soften his dovish tone for monetary policy as the Governing Council sees inflation holding above the 2% target before easing in 2013. In turn, the EURUSD climbed back above the 1.3150 region, but we saw the pair consolidate throughout the North American trade to end the day at 1.3151.