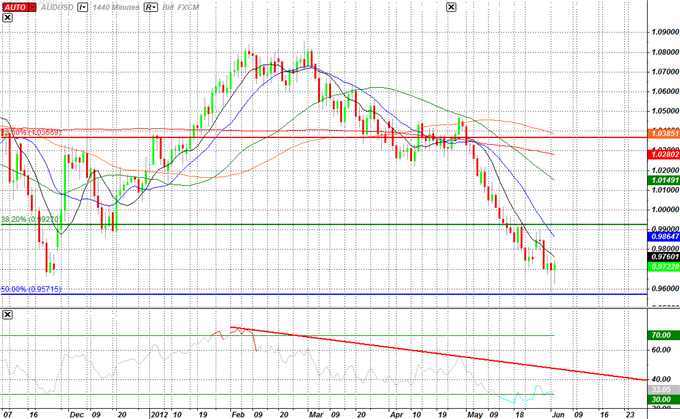 The Reserve Bank of Australia is widely expected to ease monetary policy further in June and a dovish policy statement following the rate decision is likely to dampen the appeal of the Australian dollar should the central bank show an increased willingness to lower borrowing costs further. According to a survey by Bloomberg News, 16 of the 27 economists polled forecast the RBA to lower the cash rate from 3.75%, while market participants are pricing a 63% chance for a 50bp rate cut according to Credit Suisse overnight index swaps. Indeed, the RBA may retain its aggressive approach in tackling the downside risks for the region as China – Australia’s largest trading partner – continues to face a risk for a ‘hard landing,’ and Governor Glenn Stevens may talk up expectations for lower interest rates as the outlook for growth and inflation deteriorates.

The pickup in wage growth paired with the resilience in private sector consumption may encourage the RBA to adopt a wait-and-see approach in June, and the rate decision may trigger a short-term correction in the AUDUSD should the central bank defy market expectations and soften its dovish tone for monetary policy. However, the downturn in global trade along with expectations for slower inflation may lead Governor Stevens to carry out the easing cycle throughout 2012, and we may see the central bank head keep the door open to lower the benchmark interest rate further in an effort to foster a sustainable recovery. In turn, the recent rebound in the AUDUSD may be short-lived, and the pair may continue to threaten the 50.0% Fibonacci retracement from the 2010 low to the 2011 high around 0.9570 as it searches for support.

As the AUDUSD bounces off of the 50.0% Fib, with the relative strength index coming off of oversold territory, the pair looks poised for a short-term correction, but a series of rate cuts could spark a sharp selloff in the exchange rate as it dampens the outlook for the region. Going forward, we will be closely watching the RSI as it appears to be in a downward trend, and the high-yielding currency may struggle to put in a meaningful correction should the RBA continue to endorse its easing cycle.

Forecasts for another rate cut certainly instills a bearish outlook for the high-yielding currency, but we may see the meeting foster a short-term correction in the exchange rate should the central bank stick to the sidelines. Therefore, if the RBA defies market expectations and keeps the interest rate at 3.75%, we will need a green, five-minute candle following the announcement to establish a buy entry on two-lots of AUDUSD. Once these conditions are fulfilled, we will set the initial stop at the nearby swing low or a reasonable distance from the entry, and this risk will generate our first target. The second objective will be based on discretion, and we will move the stop on the second lot to cost once the first trade reaches its mark in an effort to lock-in our gains.

In contrast, the RBA may continue to strike a cautious outlook for the region amid the ongoing slack within the real economy, and the weakening prospects for growth and inflation may push the central bank to ease monetary policy further as it aims to encourage a sustainable recovery. As a result, if the central bank lowers borrowing costs by 25bp or more, we will implement the same strategy for a short aussie-dollar trade as the long position laid out above, just in the opposite direction. 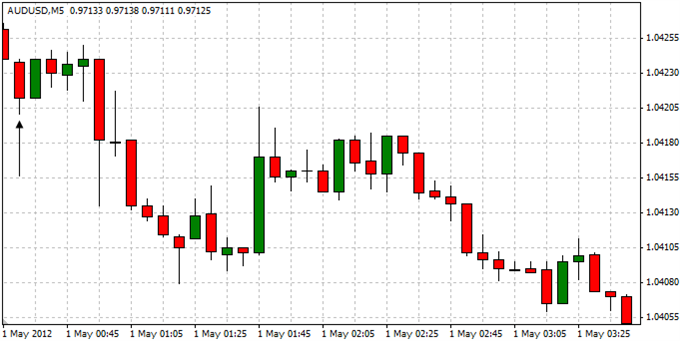 The Reserve Bank of Australia struck a dovish tone for monetary after surprising the market with a 50bp rate cut, and it seems as though the central bank will continue to embark on its easing cycle as ‘inflation will probably be lower than earlier expected.’ Indeed, the Australian dollar struggled to hold its ground following the rate decision, with the AUDUSD slipping back below the 1.0400 figure, and we saw the high-yielding currency track lower throughout the day as the pair closed at 1.0330.