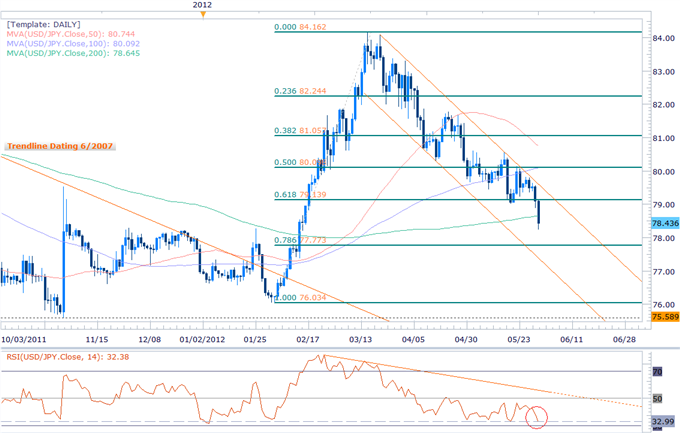 The world’s largest economy is expected to add another 150K jobs in May and a positive development may fuel a sharp rally in the U.S. dollar as it dampens expectations for another large-scale asset purchase program. As the recovery gets on a more sustainable path, we should see the Federal Reserve continue to soften its dovish tone for monetary policy, and the central bank may sound more hawkish in the second-half of the year amid the stickiness in underlying inflation. However, as Fed Chairman Ben Bernanke keeps the door open to expand the balance sheet further, we may see a growing rift within the FOMC, and the lack of consensus may encourage the committee to preserve its wait-and-see approach throughout 2012 in an effort to tackle the ongoing slack in private sector activity.

The resilience in private sector consumption paired with the rebound in business sentiment certainly bodes well for the labor market, and a marked rise in hiring may produce fresh 2012 lows in the EURUSD as it increases the appeal of the greenback. However, as the rise in job cuts paired with the downward revision in 1Q GDP dampens the outlook for employment, another below-forecast print may heighten speculation for another round of quantitative easing, and the Fed may continue to strike a cautious outlook for the region as the sovereign debt crisis continues to pose a threat to the world financial system. In turn, we may see the small rebound in the EURUSD turn into a larger correction and the pair may work its way back towards the 23.6% Fibonacci retracement from the 2009 high to the 2010 low around 1.2640-50 as it remains oversold. For a complete outlook including scalp targets on the EURUSD ahead of tomorrow's print, refer to this week's scalp report.

A look at the encompassing structure sees the USD/JPY continuing to hold within the confines of a descending channel formation off the March high with the pair breaking below the 200-day moving average at 78.65 in North American trade. While our medium-term outlook on the pair remains weighted to the topside, it’s important to note that should the risk-aversion trade persists on a weaker-than-expected NFP print, look for the pair to remain under pressure with daily support seen lower at the 78.6% retracement at 77.77. Only a breach above the 61.8% retracement at 79.10 would alleviate further downside pressure with a break above channel resistance putting us on the long side. Such a scenario eyes topside targets at the confluence of the 100-day moving average and the 50% retracement at 80.10. 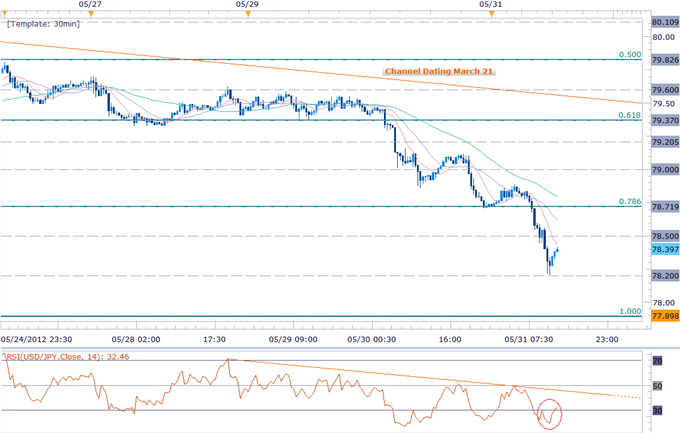 The 30min scalp chart shows the USD/JPY breaking below the 78.6% Fibonacci extension taken from the March 14th and April 20th crests at 78.70 before encountering soft support at 78.20. Subsequent floors are seen at the 100% extension at 77.90, 77.75 and 77.50. Interim topside resistance stands at 78.50, the 78.6% extension at 78.70 and the 79 figure. Should the print prompt a bullish response, look to target topside levels with a breach above channel resistance (currently around 79.40) offering further conviction on our directional bias.

Forecasts for faster job growth certainly encourage a bullish outlook for the greenback, and a positive development may set the stage for a long U.S. dollar trade as market participants curb bets for more easing. Therefore, if NFPs advance 150K or greater, we will need a red, five-minute candle following the release to generate a sell entry on two-lots of EURUSD. Once these conditions are met, we will set the initial stop at the nearby swing high or a reasonable distance from the entry, and this risk will establish our first objective. The second target will be based on discretion, and we will move the stop on the second lot to breakeven once the first trade hits its mark in order to preserve our profits.

On the other hand, the persistent slack in private sector activity paired with the weakening outlook for global trade may drag on hiring, and another dismal print may ultimately spark a sharp reversal in the reserve currency as it fuels speculation for QE3. As a result, if NFPs fall short of market expectations, we will carry out the same strategy for a long euro-dollar trade as the short position laid out above, just in the opposite direction. 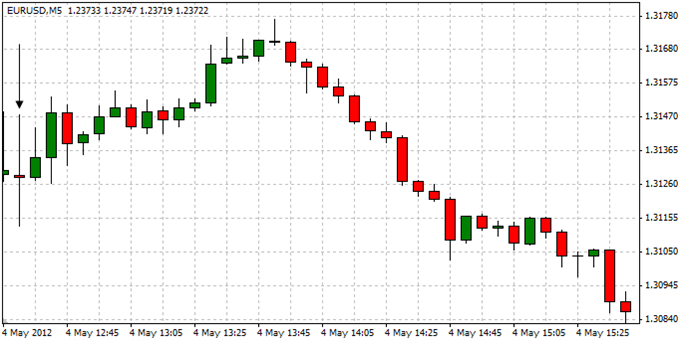 Employment in the world’s largest economy increased 115K in April after expanding a revised 154K the month prior, while the jobless rate unexpectedly slipped to 8.1% from 8.2% as discouraged workers continued to leave the labor force. The greenback sold off following the report, with the EURUSD pushing back above the 1.3150 figure, but the reserve currency regained its footing during the North American trade to end the day at 1.3078.