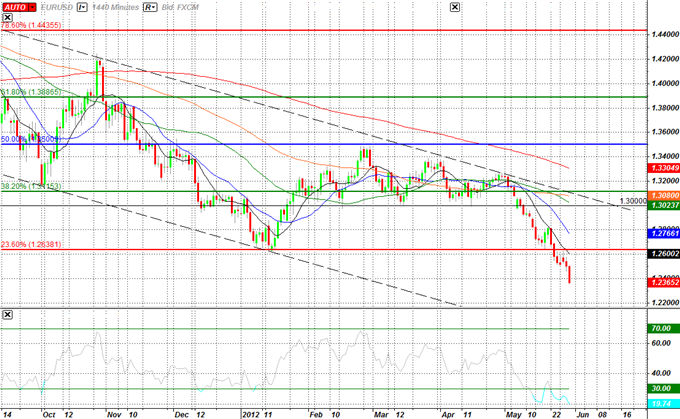 Unemployment in Europe’s largest economy is projected to contract 7K after unexpectedly increasing 19K in April, and the improvement in the labor market may prop up the EURUSD as it dampens the risk for a prolonged recession in the euro-area. As the EU continues to rely on Germany to lead the economic recovery, the ongoing improvements in Europe’s powerhouse may encourage the European Central Bank to carry its wait-and-see approach into the second-half of the year, but the central bank may keep the door open to expand monetary policy further amid the heightening threat for contagion. As European policy makers struggle to restore investor confidence, the governments operating under the fixed exchange rate are certainly becoming increasingly reliant on monetary support, and the Governing Council may have little choice but to take additional steps to shore up the ailing economy as the anti-austerity movement sparks an increased rift within the union.

As Germany continues to benefit from global trade, the pickup in economic activity may boost hiring, and a positive development may pave the way for a short-term rebound in the EURUSD as the pair remains oversold. However, the drop in business sentiment paired with the downturn in production may drag on the labor market, and a dismal employment report may fuel speculation for more easing as it raises the risk for a prolonged recession. In turn, should the development fall short of market expectations, the EURUSD may continue to give back the rebound from back in 2010 as it raises the scope for additional monetary support.

As the downward trending channel in the EURUSD continues to take shape, we maintain a bearish outlook for the medium-term, and the recent selloff in the exchange rate may gather pace as the relative strength index pushes deeper into oversold territory. Although market participants are trying to pick a short-term bottom on the euro-dollar, we are waiting for the RSI to push back above 30 to see a correction take place, and the pair may threaten the 1.2300 figure later this week as it struggles to find support. For a complete EURUSD outlook and scalp targets, refer to this week's Scalp report.

Expectations for a drop in unemployment instills a bullish outlook for the single currency, and the market reaction may pave the way for a long Euro trade should the development raise the outlook for growth. Therefore, if the print tops forecast, we will need a green, five-minute candle following the release to establish a buy entry on two-lots of EURUSD. Once these conditions are fulfilled, we will set the initial stop at the nearby swing low or a reasonable distance from the entry, and this risk will generate our first objective. The second target will be based on discretion, and we will move the stop on the second lot to cost once the first trade hits its mark in an effort to lock-in our profits.

In contrast, the slowdown in production paired with fears of a prolonged recession may drag on hiring, and a dismal employment report may heighten the bearish sentiment surrounding the single currency as the fundamental outlook for the region turns increasingly bleak. As a result, if we see another unexpected rise in unemployment, we will implement the same setup for a short euro-dollar trade as the short position laid out above, just in the opposite direction. 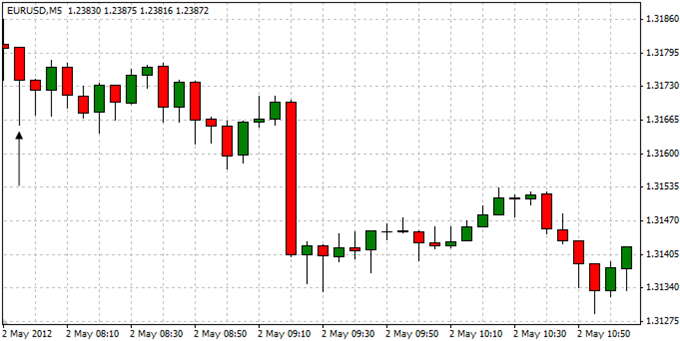 German unemployment unexpectedly increase 19K after contracting a revised 13K in March, while the jobless rate held steady at an annual rate of 6.8% for the fifth consecutive month in April. The EURUSD struggled to hold its ground following the dismal employment report, with the exchange rate falling back below the 1.3150 figure, but we saw the single currency consolidate during the North American trade to end the day at 1.3157.