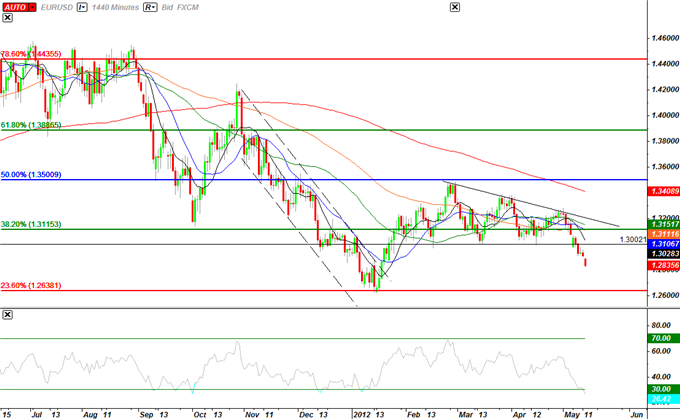 Consumer prices in the world’s largest economy are expected to expand 2.3% in April, which would mark the slowest pace of growth since February 2011, while the core rate of inflation is anticipated to hold steady at 2.3% for the second consecutive month. Indeed, we’re keeping a close eye on the stickiness in underling price growth as the economic recovery gradually gathers pace, and it seems as though the Fed is getting ready to shift gears amid the risk for inflation. As the FOMC moves away from its easing cycle, we should see the committee start to lay out a tentative exit strategy, but we may see a growing rift within the central bank as Chairman Ben Bernanke keeps the door open to expand the balance sheet further.

Indeed, businesses across the U.S. may raise consumer prices amid the resistance in private sector consumption, and an above-forecast print could spark another short-term rally in the greenback as market participants scale back bets for additional monetary support. However, subdued wage growth paired with easing commodity prices certainly dampens the outlook for inflation, and we may see firms continue to conduct heavy discounting in an effort to draw greater demand. In turn, a soft inflation print could spark a rebound in the EURUSD, but we should see former support around 1.3000 act as resistance as the bearish formation continues to play out.

The EURUSD certainly looks poised for a short-term correction as the recent decline in the exchange rate remains oversold, but we should see the pair continue to give back the advance from earlier this year until the oscillator crosses back above 30. However, as the 10, 20, 50, and 100-Day SMA’s start to break away from one another, the moving averages foreshadow a very aggressive move to the downside, and we may see the pair come up against the 23.6% Fibonacci retracement from the 2009 high to the 2010 low around 1.2640-50 to test for interim support. Nevertheless, we expect to see fresh yearly lows in the exchange rate as the pair carves out a lower low coming into May, and the downward trend should continue to take shape throughout the year as the FOMC looks to conclude its easing cycle.

Expectations for a slower rate of inflation fosters a bearish outlook for the greenback, but the stickiness in underlying price growth could pave the way for a long U.S. dollar trade as it dampens expectations for another round of quantitative easing. Therefore, if the core rate holds steady at 2.3% or unexpectedly increases from the previous month, we will need to see a red, five-minute candle following the release to generate a sell entry on two-lots of EURUSD. Once these conditions are met, we will set the initial stop at the nearby swing low or a reasonable distance from the entry, and this risk will establish our first target. The second objective will be based on discretion, and we will move the stop on the second lot to cost once the first trade reaches its mark in order to lock-in our profits.

On the other hand, easing wage growth paired with falling commodity prices could further dampen consumer prices, and a soft inflation report could drag on the greenback as it fosters speculation for more QE. As a result, if the report falls short of market expectations, we will carry out the same setup for a long euro-dollar trade as the short position mentioned above, just in reverse. 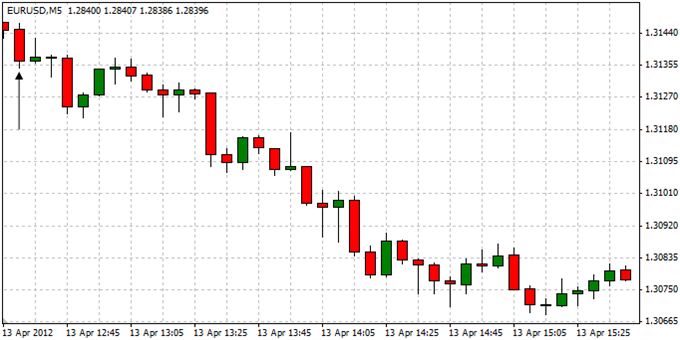 The headline reading for inflation weakened to 2.7% from 2.9% in February, while core consumer prices increased 2.3% during the same period amid forecasts for a 2.2% print. The stickiness in underlying price growth propped up the dollar, with the EURUSD slipping below 1.3100, and we saw the greenback gain ground throughout the North American trade as the pair ended the day at 1.3073.