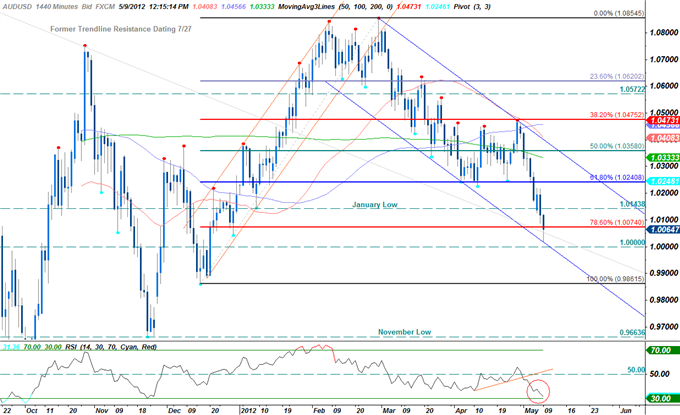 Australia is expected to shed 5.0K jobs in April following the 44.0K expansion during the previous month, and the slowdown in the labor market may drag on the exchange rate as it dampens the outlook for the $1T economy. Indeed, the Reserve Bank of Australia lowered its forecast for growth and inflation as the central bank expects job growth to ‘remain subdued,’ and it seems as though the central bank will carry its easing cycle into the second-half of the year in an effort to encourage a sustainable recovery. According to Credit Suisse overnight index swaps, market participants still see the benchmark interest rate falling by nearly 100bp over the next 12-months, and we may see the RBA take a more aggressive approach in addressing the risks surrounding the region as the fundamental outlook for the world economy remains clouded with high uncertainty.

The ongoing improvement in business confidence paired with the expansion in private sector consumption certainly bodes well for hiring, and a positive jobs report may push the AUDUSD back above the 23.6% Fibonacci retracement from the 2010 low to the 2011 high around 1.0350-60 as it dampens expectations for lower borrowing costs. However, the persistent slack in the real economy paired with the slowdown in world trade may lead businesses to scale back on employment, and a marked drop in job growth would heighten expectations for another rate cut as the RBA maintains a cautious tone for the region. In turn, we may see the AUDUSD continue to give back the rebound from 2011, and the pair may fall back towards the 38.2% Fib around 0.9930-50 as market participants look for a series of rate cuts from the RBA.

A look at the encompassing structure sees the AUDUSD trading within the confines of a descending channel formation dating back to the February 29th high with the pair rebounding off of channel support in early US trade. The aussie is at critical levels here with a break below parity risking accelerated losses for the high yielder. Daily resistance now stands at the 78.6% Fibonacci retracement taken from the December advance and is backed by the January low at 1.0140. 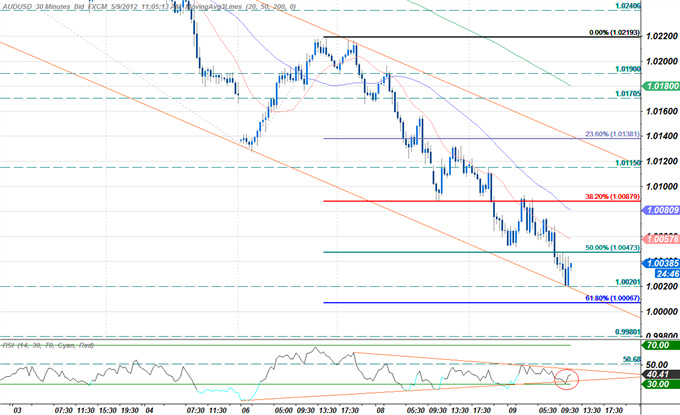 Our scalp chart shows the pair trading within the confines of an embedded descending channel formation with the rebound off channel support reinforcing the price action seen on the daily chart above. Soft interim support rests at 1.0020 backed by the 61.8% Fibonacci extension taken from the April 27th and May 7th crests at 1.0006. Interim topside resistance stands at the 50% extension at 1.0050 with a likely break here eyeing subsequent ceilings at the 38.2% extension at 1.0090 and 1.0115. Should the print prompt a bearish response look to target downside levels with a break below channel support offering further conviction on our directional bias. Such a scenario eyes downside targets at 9980, the 78.6% extension at 9950 and 9920.

Expectations for a drop in employment certainly casts a bearish outlook for the high-yielding currency, but a positive development could pave the way for a long Australian dollar trade as it dampens expectations for another rate cut. Therefore, if the region unexpectedly adds more jobs in April, we will need to see a green, five-minute candle following the release to generate buy entry on two-lots of AUDUSD. Once these conditions are met, we will set the initial stop at the nearby swing low or a reasonable distance from the entry, and this risk will establish our first objective. The second target will be based on discretion, and we will move the stop on the second lot to cost once the first trade reaches its mark in order to protect our winnings.

In contrast, the slowing recovery in Australia paired with decline in global trade casts a dour outlook for the labor market, and a dismal print could trigger a sharp selloff in the exchange rate as market participants expect to see a series of rate cuts from the RBA. As a result, if employment contracts 5.0K or greater from the previous month, we will carry out the same strategy for a short aussie-dollar trade as the long position laid out above, just in the opposite direction. 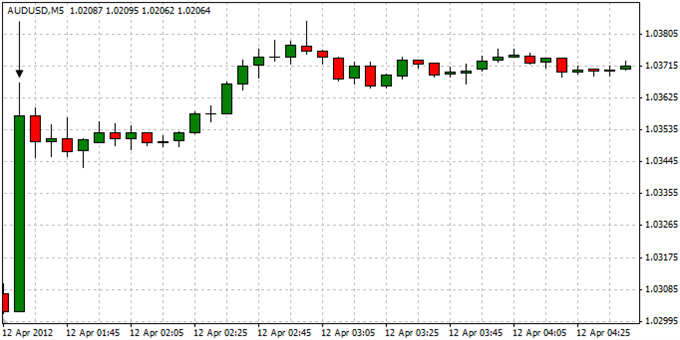 Employment in Australia jumped 44.0K following the 15.4K contraction February, while the jobless rate held at 5.2% for the second consecutive month in March. Indeed, the better-than-expected print propped up the Australian dollar, with the AUDNZD climbing back above 1.0350, and the high-yielding currency continued to gain ground throughout the day as the exchange rate closed at 1.0439.