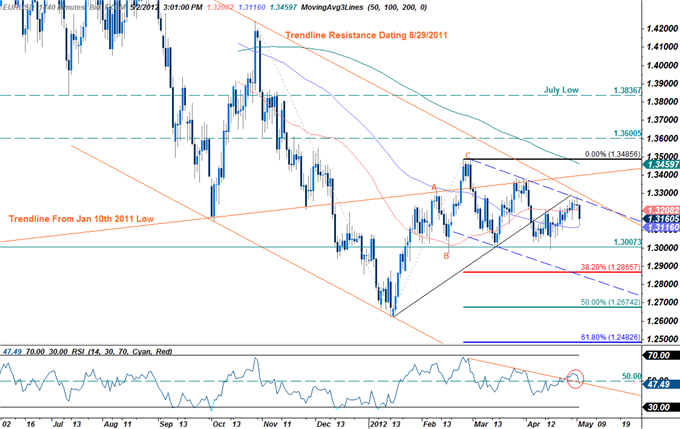 Although the European Central Bank is widely expected to keep the benchmark interest rate at 1.00%, the fresh batch of comments from President Mario Draghi could drag on the EURUSD should the central bank head show an increased willingness to expand monetary policy further. As the sovereign debt crisis continues to dampen the outlook for the euro-area, the policy statement may sound a bit more dovish this time around, and the Governing Council may look to target the benchmark interest rate as the slew of non-standard measures appear to be having a limited impact on the real economy. As the threat for a prolonged recession casts a bearish outlook for the single currency, the rate decision could serve as a catalyst to spark a sharp selloff in the EURUSD, and the bearish formation should continue to take shape as price action approaches the apex of the descending triangle.

Despite the weakening outlook for the euro-area, heightening price pressures may encourage the ECB to draw up a more balanced tone for the region, and the central bank may endorse a wait-and-see approach throughout the first-half of the year as it preserve its one and only mandate to ensure price stability. However, the ongoing weakness in the labor market paired with fears of a deep recession may bring about a very dovish policy statement, and the Governing Council may look to carry its easing cycle into the second-half of the year in an effort to encourage a stronger recovery.

A look at the encompassing structure sees the EURUSD trading within the confines of a broad descending channel formation dating back to the August highs with the single currency rebounding off channel resistance of an embedded channel dating back to the February highs. Key daily resistance stands at the 1.33 figure with a breach above this level challenging the 1.34-figure and the February highs at 1.3485. Daily support rests with the 100-day moving average at 1.3115 and the 1.30-figure. 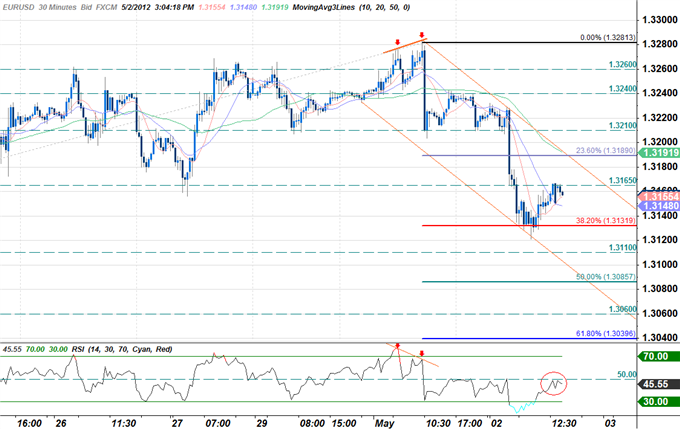 The scalp charts shows somewhat of a mixed outlook for the EURUSD. Clear bearish divergence in the relative strength index alluded to the euro’s decline today with the single currency rebounding off the 38.2% Fibonacci extension taken from the March 27th and May 1st crests at 1.3130 before encountering soft resistance at 1.3165. Subsequent resistance levels are eyed at the 23.6% extension at 1.3190 backed by 1.3210, 1.3240 and 1.3260. A breach above the May 1st high at 1.3280 negates this specific setup with such a scenario eyeing targets above the 1.33-handle. Interim support rests with the 38.2% extension with support targets seen lower at 1.3110, the 50% extension at 1.3085 and 1.3060. The initial objective remains the 1.30 figure which has been met with sharp rebounds over the past three months each time the level has been tested. Should the print prompt a bearish response look to target downside levels with a break below the 1.30-threshold offering further conviction on our directional bias.

Trading the interest rate decision may not be as clear cut as some of our previous trades as ECB President Mario Draghi is scheduled to speak at 12:30 GMT, but the policy statement may pave the way for a long Euro trade should the central bank strike a balanced outlook for the region. Therefore, if Mr. Draghi talks down the risks surrounding the region and highlights the recent pick up in price growth, we will need a green, five-minute candle following the release to generate a buy entry on two-lots of EURUSD. Once these conditions are met, we will set the initial stop at the nearby swing low or a reasonable distance from the entry, and this risk will establish our first target. The second objective will be based on discretion, and we will move the stop on the second lot to breakeven once the first trader hits its mark in order to protect our profits.

In contrast, the ongoing weakness in the real economy paired with the threat for contagion may ultimately lead to a very dovish ECB, and we may see the central bank head may endorse the easing cycle as the fundamental outlook for the region remains bleak. As a result, if the Governing Council opens the door for additional monetary support, we will implement the same setup for a short euro-dollar trade as the long position laid out above, just in the opposite direction. 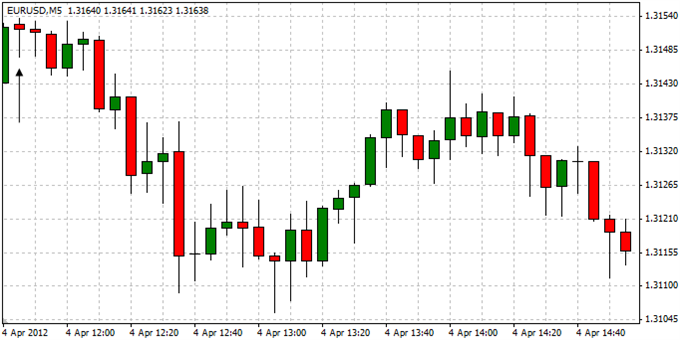 As expected, the European Central Bank struck a cautious outlook for the region after keeping the benchmark interest rate at 1.00%, while central bank President Mario Draghi argued that ‘any exit strategy talk for the time being is premature’ as the region faces a double-dip recession. The dovish tone held by the ECB dragged on the Euro, with the EURUSD falling back towards the 1.3100 figure, but we saw the single currency consolidate during the North America trade to end the day at 1.3140.