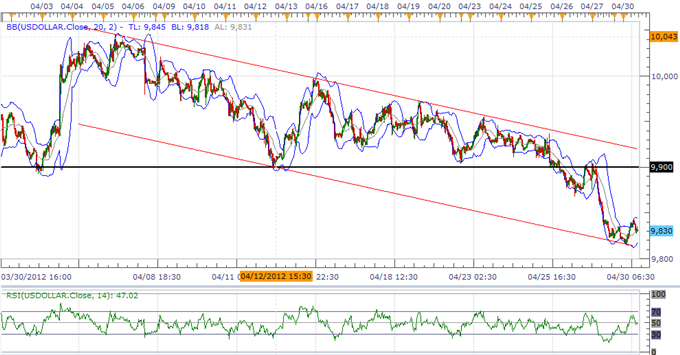 USD To Find Bid On Broader Fundamentals, AUD At Risk On RBA Policy

The Dow Jones-FXCM U.S. Dollar Index (Ticker: USDollar) is 0.07 percent higher from the open after being oversold on Friday, and the greenback should continue to retrace the decline from earlier this month as we expect the Federal Reserve to conclude its easing cycle this year. However, the technical outlook continues to paint a bearish picture for the dollar as the downward trending channel takes shape, and we may see former support around 9,900 act as new resistance as market participants maintain bets for another round of quantitative easing. 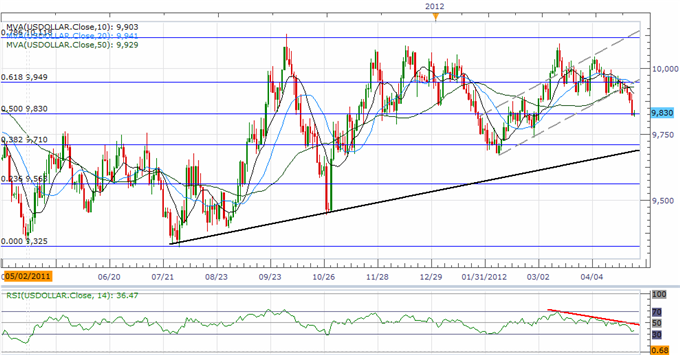 The USDOLLAR appears to be finding short-term support around the 50.0 percent Fibonacci retracement (9,830) as the relative strength index bounces back ahead of oversold territory, but the bearish divergence in the oscillator foreshadows further declines for the greenback as it maintains the downward trend carried over from the previous month. Nevertheless, as the developments coming out of the U.S. continue to point to high inflation, heightening price pressures certainly limit’s the FOMC’s scope to implement another round of quantitative easing, and we should see the central bank sound a bit more hawkish in the second-half of the year as Fed officials anticipate to see a stronger recovery. In turn, the shift in the policy outlook should prop up the dollar over the near-term, and the index could be carving out a higher low ahead of May as the RSI bounces back from a low of 35. Should the dollar continue to consolidate around 9,830, we may see the reserve currency build a short-term base ahead of the highly anticipated Non-Farm Payrolls report due out on Friday, and the development may ultimately spark a sharp reversal in the index should the data instill an improved outlook for the region.

The greenback advanced against three of the four components, led by a 0.53 percent decline in the Australian dollar, and the high-yielding currency may face a sharp selloff over the next 24-hours of trading should the Reserve Bank of Australia embark on series of rate cuts in the coming months. Although the RBA is widely expected to lower the benchmark interest rate by 25bp to 4.00%, market participants are looking for more than 100bp worth of rate cuts over the next 12-months according to Credit Suisse overnight index swaps as growth and inflation falters. In turn, if Governor Glenn Stevens continues to endorse the easing cycle at the rate decision due out tonight, we should see the AUDUSD give back the rebound from earlier this month, and the pair may make another run at 1.0200 as interest rate expectations deteriorate.