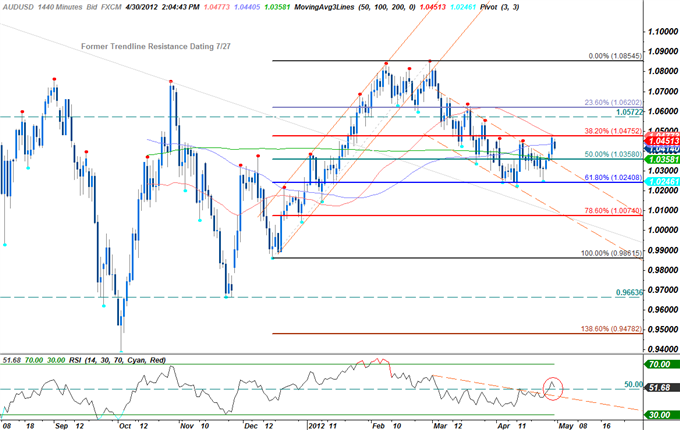 The Reserve Bank of Australia is widely expected to lower the benchmark interest rate by 25bp to 4.00% in May, and we may see the central bank carry out its easing cycle throughout 2012 in an effort to combat the slowing recovery. According to Credit Suisse overnight index swaps, market participants see borrowing costs falling by more than 100bp over the next 12-months, and the RBA may embark on a series of rate cuts going into the second-half of the year as the fundamental outlook for the $1T economy deteriorates.

The rise in private sector consumption paired with the jump in employment may allow the RBA to preserve its wait-and-see approach, and the development may ultimately produce a relief rally in the AUDUSD as market participants scale back speculation for lower borrowing costs. However, easing price pressures paired with the slower rate of growth may encourage the central bank to further support the ailing economy, and we may see Governor Glenn Stevens strike a very dovish outlook for monetary policy as the

A look at the encompassing structure sees the AUDUSD breaking above the confluence of channel resistance dating back to March 6th, the 200-day moving average, and the 50% Fibonacci retracement of the December advance at 1.0360 last week before encountering resistance at the convergence of the 38.2% retracement and the 50-day moving average at 1.0475. We will reserve this level as our topside limit which if breached shifts our focus to subsequent resistance targets. Key support now rests at 1.0360 backed by the 61.8% retracement at 1.0240. 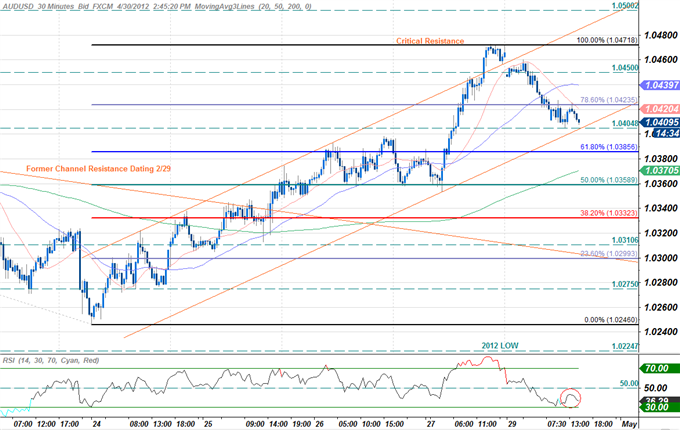 The scalp chart shows the aussie trading within the confines of an ascending channel formation after briefly breaching channel resistance on Friday. A break below this formation eyes interim support targets at the 61.8% Fibonacci extension taken from the April 10th and 24th troughs at 1.0385 backed by the 50% extension at 1.0360, and the 38.2% extension at 1.0330. A break below the 1.03-figure risks substantial losses with such a scenario eyeing soft support at 1.0275 and the April 24th low at 1.0246 with a move below the 2012 low at 1.0225 shifting our focus more aggressively to the short side. Interim resistance stands with the 78.6% extension at 1.0424 backed by 1.0450 and the April high at 1.0472. Should the print prompt a bearish response look to target downside levels with only a breach above the April high negating our bias.

Forecasts for a 25bp rate cut certainly instills a bearish outlook for the high-yielding currency, but the rate decision may foster a long AUDUSD trade should the RBA preserve its wait-and-see approach in May. Therefore, if the central bank keeps the benchmark interest rate at 4.25%, we will need a green, five-minute candle following the announcement to establish a buy entry on two-lots of AUDUSD. Once these conditions are fulfilled, we will place the initial stop at the nearby swing low or a reasonable distance from the entry, and this risk will generate our initial target. The second objective will be based on discretion, and we will move the stop on the second lot to cost once the first trade hits its mark in an effort to preserve our profits.

On the other hand, the RBA may sound increasingly dovish this time around as policy makers take note of the slowing recovery, and we may see the central bank take a more aggressive approach in stimulating the ailing economy as growth and inflation falter. As a result, should the RBA lower the key rate to 4.00% and highlight additional rate cuts for the coming months, we will carry out the same strategy for a short aussie-dollar trade as the long position laid out above, just in the opposite direction. 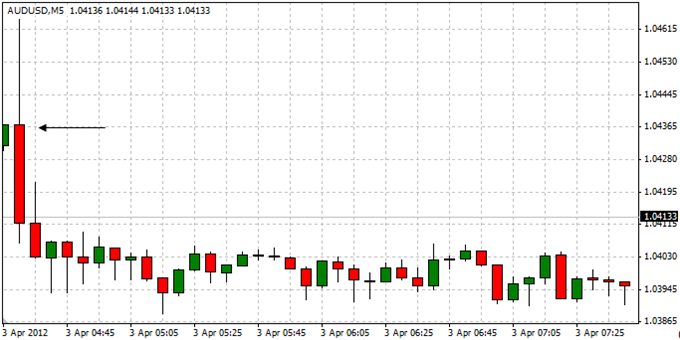 As expected, the Reserve Bank of Australia held the benchmark interest rate at 4.25%, but kept the door open to ease monetary policy further as ‘the board judged the pace of output growth to be somewhat lower than earlier estimated.’ The dovish done struck by the RBA dragged on the Australian dollar, with the AUDUSD slipping back below 1.0400, and the high-yielding currency continued to lose ground throughout the day as the pair closed at 1.0329.