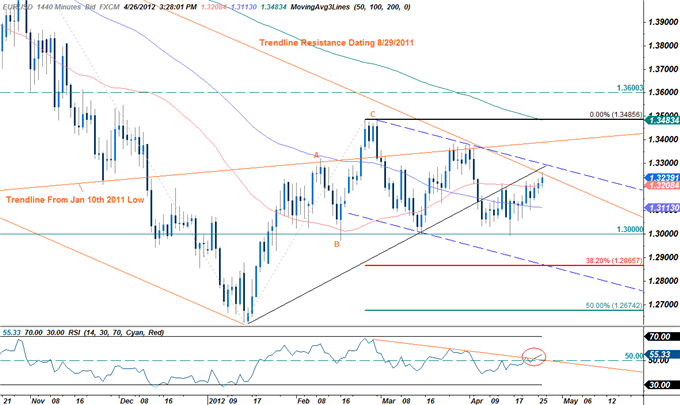 The advanced GDP report is expected to show the world’s largest economy expanding at an annual rate of 2.5% in the first-quarter, and the slower rate of growth may encourage a bearish outlook for the U.S. dollar as Fed Chairman Ben Bernanke maintains a cautious outlook for the region. Indeed, the initial growth reading has had a tendency of falling short of market expectations in 2011, and a weaker-than-expected print could threaten the bearish formation in the EURUSD as market participants increase bets for another large-scale asset purchase program. However, as Fed officials anticipate to see a more robust recovery in 2012, a strong GDP figure could produce a sharp selloff in the euro-dollar as the pair continues to approach the apex of the descending triangle.

The resilience in private sector consumption paired with the rebound in wage growth may generate an above-forecast GDP print, and a positive development may push the EURUSD back towards 1.3000 as the bearish formation continues to take shape. However, the ongoing weakness in the housing market paired with the protracted recovery in employment continues to dampen the outlook for the world’s largest economy, and we may see the FOMC show an increased willingness to expand policy further should the growth report dampen expectations for a sustainable recovery. In turn, we may see the EURUSD threaten the bearish formation from earlier this year, and the pair may work its way back towards 1.3400 as market participants increase bets for QE3.

A look at the encompassing structure sees the euro trading within the confines of a broad descending channel formation dating back to August 29th with the pair testing channel resistance today at 1.3260. Subsequent ceilings are seen at trendline resistance dating back to the February highs (currently just shy of 1.33) and former trendline support dating back to January 10th 2011. Daily support rests with the 50-day moving average at 1.32 backed by the 100-day moving average at 1.3113 and the 1.30-figure. Our medium-term outlook remains weighted to the downside with only a breach above the April highs at 1.3380 negating our bias. 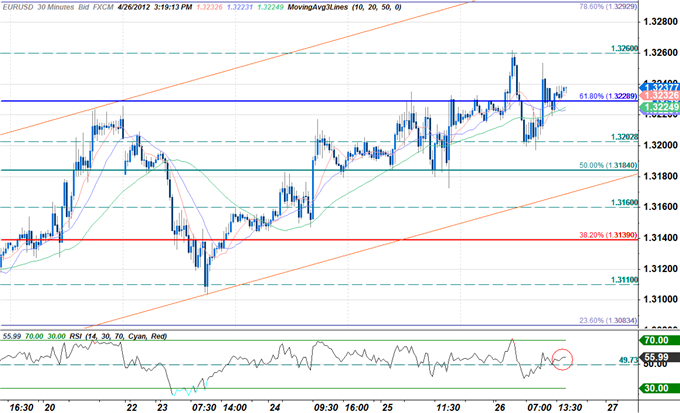 The scalp chart shows the single currency trading within the confines of an ascending channel formation dating back to April 15th with the pair holding just above interim support at the 61.8% Fibonacci extension taken form the March 14th and April 16th troughs at 1.3230. Subsequent intra-day support targets are seen at the 1.32-figure and the confluence of channel support and the 50% extension at 1.3185. A break below this level shifts our focus lower with such a scenario eyeing support targets at 1.3160, the 38.2% extension at 1.3140 and 1.3110. Topside resistance stands at 1.3260 backed by the 78.6% extension at 1.3295 and 1.3220. Should the print prompt a bullish dollar response look to target downside levels with a break below the weekly low at 1.3104 offering further conviction on our directional bias.

Projections for a slower rate of growth casts a bearish outlook for the greenback, but a positive development could pave the way for a long U.S. dollar trade as it dampens speculation for more easing. Therefore, if the growth rate expands 2.5% or greater in the first-quarter, we will need to see a red, five-minute candle following the release to establish a sell entry on two-lots of EURUSD. Once these conditions are met, we will set the initial stop at the nearby swing high or a reasonable distance from the entry, and this risk will generate our first target. The second objective will be based on discretion, and we will move the stop on the second lot to cost once the first trade reaches its mark in an effort to protect our winnings.

In contrast, the ‘depressed’ housing market paired with high unemployment may have had a large dampening effect on the real economy, and a dismal growth figure could spark a sharp selloff in the USD as it raises the scope for more quantitative easing. As a result, if the economy grows less than 2.5%, we will implement the same strategy for a long euro-dollar trade as the short position laid out above, just in the opposite direction.

The world’s largest economy grew an annualized 2.8% in the fourth-quarter after expanding 1.8% during the three-months through September, while personal consumption advanced 2.0% amid forecasts for a 2.4% print. The dismal GDP report dragged on market sentiment, which pushed the EURUSD below 1.3100, but the initial reaction was short-lived as the pair ended the day at 1.3213.