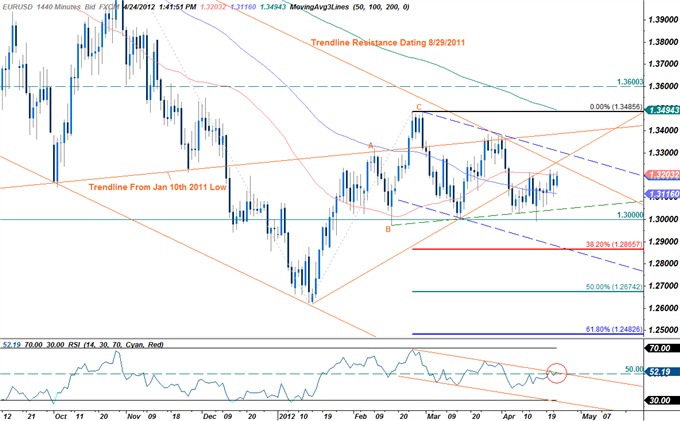 Although the Federal Open Market Committee is widely anticipated to preserve its current policy stance in April, the fresh batch of central bank rhetoric paired with the updated forecasts for growth and inflation may prop up the U.S. dollar should the central bank highlight an improved outlook for the world’s largest economy. As the Fed takes note of the more robust recovery, the central bank may continue to talk down speculation for another round of quantitative easing, and we may see the committee bring its easing cycle to an end as the region gets on a more sustainable path. In turn, the FOMC may start to discuss a tentative exit strategy over the coming months, and the central bank may look to normalize monetary policy towards the end of the year as Fed officials anticipate to see a stronger recovery in 2013.

The resilience in private sector consumption paired with the stickiness in underlying inflation may encourage the FOMC to drop its dovish tone for monetary policy, and the shift in the policy outlook may push the EURUSD back towards 1.3000 as market participants scale back bets for QE3. However, we may see the Fed continue to endorse its 2014 pledge amid the ongoing weakness in housing paired with the protracted recovery in the labor market, and central bank Chairman Ben Bernanke may keep the door open to expand policy further in an effort to balance the risks surrounding the region. In turn, we may see the EURUSD continue to retrace the decline from earlier this month, and the pair may ultimately breakout of its bearish formation as market participants increase bets for more easing.

A look at the encompassing structure sees the EURUSD trading within a broad descending channel formation dating back to the August with the pair holding just below the 50-day moving average at the 1.32-figure. Key daily topside resistance stands at the confluence of channel resistance and former trendline support at 1.3255 with only a breach above short-term channel resistance dating back to the February highs, currently at 1.33, negating our bearish bias. Daily support rests with trendline support dating back to the February lows at 1.3040 backed by the 1.30-handle and the 38.2% Fibonacci extension taken from the October and February crests at 1.2865. 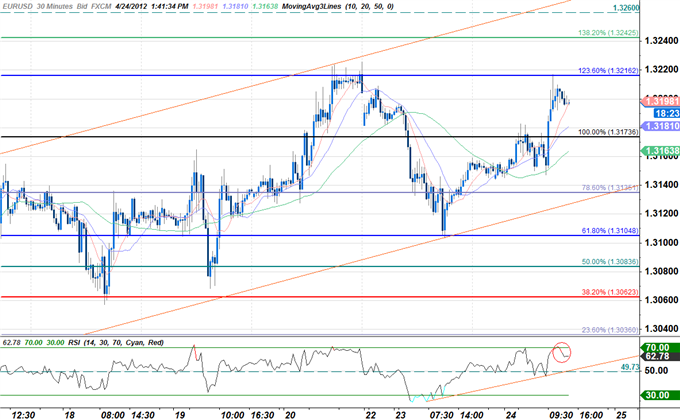 Trading the given event risk may not be as clear cut as some of our previous trades as Fed Chairman Bernanke is scheduled to speak at 18:15 GMT, but the developments coming out of the meeting could pave the way for a long U.S. dollar trade should the central bank strike an improved outlook for the economy. Therefore, if the Fed raises its fundamental forecast and sounds a bit more hawkish this time around, we will need a red, five-minute candle following the announcement to establish a sell entry on two-lots of EURUSD. Once these conditions are fulfilled, we will set the initial stop at the nearby swing low or a reasonable distance from the entry, and this risk will generate our first objective. The second target will be based on discretion and we will move the stop on the second lot to breakeven once the first trade hits its mark in order to preserve our profits.

On the other hand, the Fed may strike a balanced tone for the region as the region remains vulnerable to external shocks, and the committee may preserve a cautious outlook for the economy amid the ongoing slack in private sector activity. As a result, if the FOMC preserves its 2014 pledge and sees a risk for a slower recovery, we will implement the same strategy for a long euro-dollar trade as the short position laid out above, just in reverse. 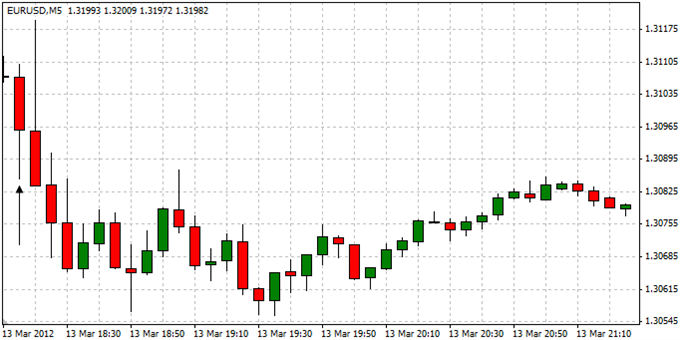 The Federal Open Market Committee maintained its current policy stance in March amid the ongoing slack within the real economy, but we saw the central bank soften its dovish tone for monetary policy and raise its fundamental assessment for the region as the recovery gradually gathers pace. Indeed, the U.S. dollar bounced higher following the rate decision, with the EURUSD falling back below 1.3100, but the greenback consolidated throughout the North American trade to end the day at 1.3081.