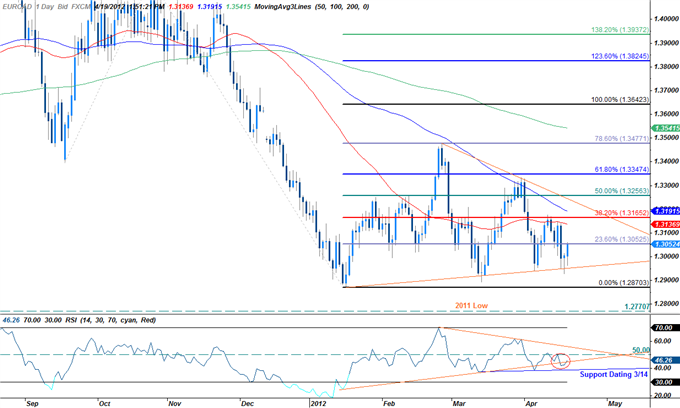 The headline reading for Canadian inflation is expected to fall back to 2.0% in March and a soft consumer price report could drag on the loonie as it dampens expectations for a rate hike. Indeed, the Bank of Canada scaled back its dovish tone for monetary policy as the economic recovery gathers pace, but we may see the central bank preserve its wait-and-see approach throughout 2012 on the back of easing price pressures.

As businesses sentiment improves, firms may pass on higher costs onto consumer amid the ongoing improvement in the labor market, and an above-forecast print may lead the EURCAD to give back the advance from earlier this week as market participants increase bets for higher borrowing costs. However, the slowdown in private sector consumption may encourage businesses to keep a lid on consumer prices and a dismal CPI report could trigger a sharp selloff in the loonie as market participants scale back bets for a rate hike. In turn, the short-term rebound in the EURCAD may gather pace over the next 24-hours of trading, and we may see the pair continue to retrace the decline from earlier this month as the pair appears to be carving a major bottom in 2012.

A look at the encompassing structure sees the EURCAD continuing to consolidate into the apex of a wedge formation with the exchange rate now testing daily resistance at the 23.6% Fibonacci extension taken from the September 19th and January 17th troughs at 1.3050. A breach above this level eyes daily resistance at the 50-day moving average at 1.3136 backed by the 38.2% extension at 1.3165. Note that RSI broke below trendline support dating back to January with oscillator now attempting break back above. We will reserve a new trendline support dating back to the March lows as our downside trigger which if compromised negates our medium-term bullish bias. 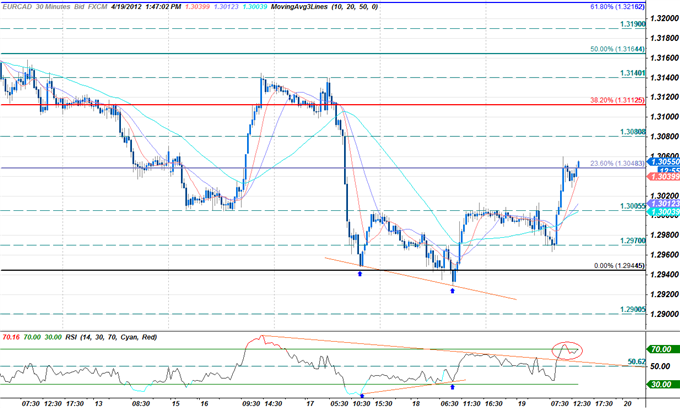 Our 30min scalp chart shows the EURCAD attempting to break above interim resistance at the 23.6% Fibonacci extension taken form the March 14th and April 5th troughs at 1.3050. Clear RSI bullish divergence suggests further topside moves are likely with subsequent targets eyed at 1.3080, the 38.2% extension at 1.3113 and 1.3140. Note that the 50% extension at 1.3165 coincides with the 38.2% extension taken on our daily chart and if breached offers further conviction on our directional bias. Interim support rests at 1.3005 backed by 1.2970 and 1.2945. A break below this level eyes the 2012-low at 1.2870 backed by the 2011 lows at 1.2770. Should the data prompt a bearish loonie response look to target topside levels with our bias weighted to the topside so long as the monthly low at 1.2933 is respected.

Forecasts for a slower rate of inflation casts a bearish outlook for the loonie, but an above-forecast print could pave the way for a long Canadian dollar trade as investors see the BoC gradually withdrawing monetary support. Therefore, if the CPI tops market expectations, we will need to see a red, five-minute candle following the report to establish a sell entry on two-lots of EURCAD. Once these conditions are fulfilled, we will place the initial stop at the nearby swing high or a reasonable distance from the entry, and this risk will generate our first target. The second objective will be based on discretion, and we will move the stop on the second lot to breakeven once the first trade hits its target in order to lock-in our winnings.

However, as private sector consumption wanes, businesses may dampen prices in an effort to draw demands, and a soft inflation report could spark a selloff in the Canadian dollar as it curbs speculation for higher interest rates. As a result, if the headline reading falls back to 2.0% or lower, we will implement the same strategy for a long euro-loonie trade as the short position laid out above, just in reverse. 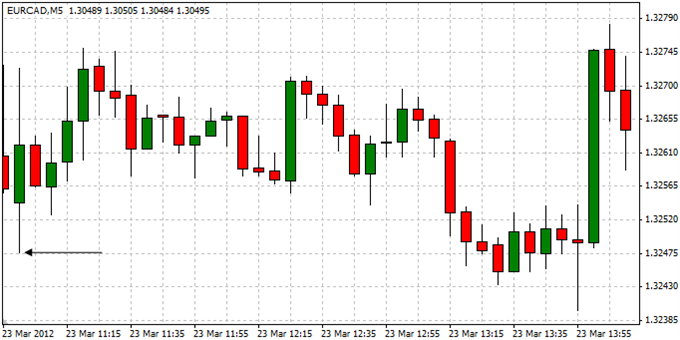 Consumer prices in Canada increased at an annualized pace of 2.6% after expanding 2.5% in January, while the core rate of inflation climbed 2.3% to mark the fastest pace of growth since July 2007. Indeed, the EURCAD tipped higher following the release as the headline reading fell short of market expectations, but the Canadian dollar regained its footing during the North American trade, with the pair ending the session at 1.3233.