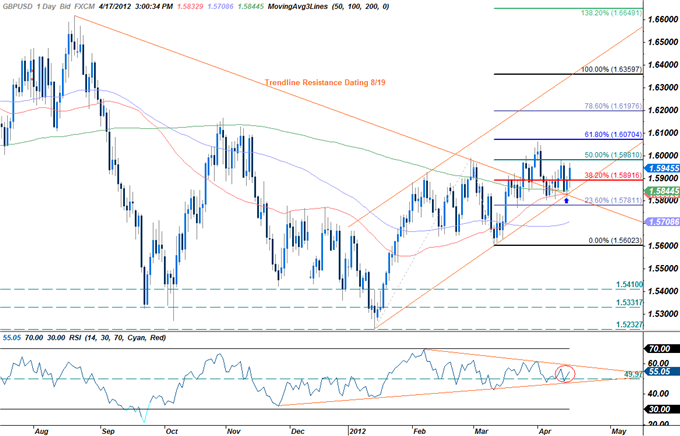 Although the Bank of England Minutes is expected to show board members David Miles and Adam Posen voting for another GBP 25B in quantitative easing, the policy statement could spark a bullish reaction in the British Pound should the central bank continue to soften its dovish tone for monetary policy. As BoE officials anticipate to see a more robust recovery later this year, the Monetary Policy Committee may continue to see a limited risk of undershooting the 2% target for inflation, and the central bank may move away from its easing cycle as the fundamental outlook for the U.K. picks up.

Sticky price pressures in the U.K. certainly limits the BoE’s scope to expand the Asset Purchase Facility, and a less dovish policy statement could ultimately bring about fresh yearly highs in the GBPUSD as the bullish formation continues to take shape. However, the BoE may keep the door open to expand monetary policy further amid the slowdown in private sector consumption paired with the ongoing weakness in the labor market, and the central bank may sound a bit more dovish as the weakening outlook for Europe – U.K.’s largest trading partner – dampens the scope for a stronger recovery. In turn, we may see the GBPUSD threaten support around 1.5800, and the pair may fail to maintain the upward trending channel from earlier this year as market participants anticipate to see the BoE carry out its easing cycle throughout 2012.

A look at the encompassing structure sees the sterling trading within the confines of an ascending channel formation dating back to the 2012-lows made in mid-January with the exchange rate holding above former trendline resistance dating back to August 19th. Daily resistance stands at the 50% Fibonacci extension taken from the January 13th and March 12th troughs at 1.5980 with critical resistance seen at the April 2nd high (1.6062) just shy of the 61.8% extension at 1.6070. We remains cautiously bullish here with a only a breach above the monthly high at 1.6062 offering conviction on our directional bias. Daily support now rests with the 38.2% extension at 1.5890 backed by the 200-day moving average at 1.5845. A break below the 23.6% extension negates our bias with such a scenario eyeing subsequent support target at the 100-day moving average at 1.5709 and the March lows at 1.5602. Note that daily RSI remains within the confines of a wedge formation with the pending break-out likely to offer further clarity as the pair remains in consolidation. 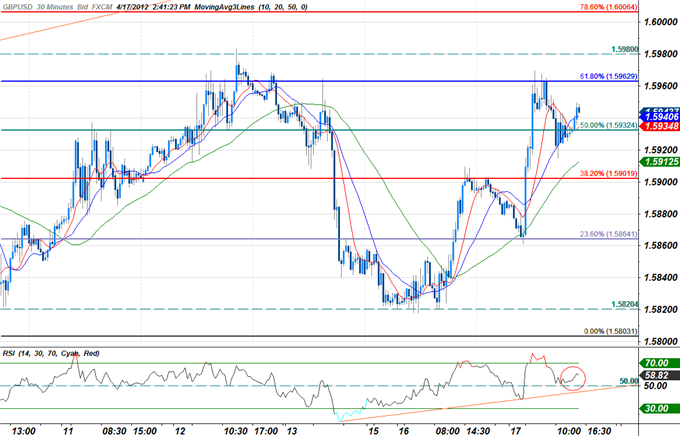 Our 30min scalp chart shows the pound holding above interim support at the 50% Fibonacci retracement taken from the April 2nd decline at 1.5930. Subsequent intra-day support levels are seen at the 38.2% retracement at the 1.59-figure, 1.5865 and the weekly low at 1.5820. A break below the 1.58-handle risks substantial losses for the pounds with a close below 1.5780 shifting our focus to bearish targets. Interim topside resistance stands at the 61.8% retracement at 1.5960 with a breach above 1.5980 targeting the 78.6% extension at the 1.60-figure and 1.6040. Should the print prompt a bullish response, look to target topside levels with a break above the monthly high at 1.6060 offering further conviction on sterling longs.

Trading the given event risk is certainly not as clear cut as some of our previous trades, but a less dovish statement could pave the way for a long British Pound trade as market participants curb speculation for more QE. Therefore, if the central bank takes note of the stickiness in price growth and raises its fundamental outlook for the region, we will need to see a green, five-minute candle following the statement to generate a buy entry on two-lots of GBPUSD. Once these conditions are fulfilled, we will set the initial stop at the nearby swing low or a reasonable distance from the entry, and this risk will establish our first target. The second objective will be based on discretion, and we will move the stop on the second lot to cost once the first trade reaches its mark in order to preserve our profits.

On the other hand, the ongoing slack within the real economy paired with the threat of a prolonged recession in the euro-area may lead the BoE to retain a cautious outlook for the region, and we may see the central bank keep the door open to expand policy further in an effort to promote a stronger recovery. As a result, if the MPC sounds more dovish this time around, we will implement the same setup for a short pound-dollar trade as the long position laid out above, just in the opposite direction.

The Bank of England meeting minutes dragged on the British Pound as David Miles and Adam Posen pushed for another GBP 25B in quantitative easing, but it seems as though the Monetary Policy Committee is softening its dovish tone for monetary policy as central bank officials now see a limited risk of undershooting the 2% target for inflation. The sterling tumbled lower following the policy statement, with the GBPUSD quickly moving back below 1.5850, but we saw the pound-dollar consolidate during the North American trade to end the day at 1.5870.