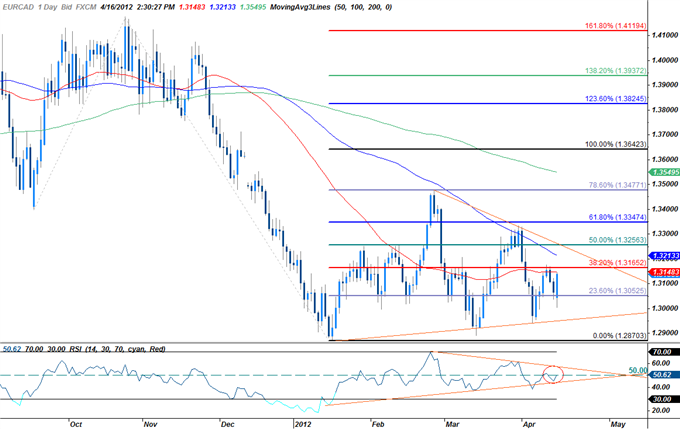 Although the Bank of Canada is widely expected to keep the benchmark interest rate at 1.00% in April, the fresh batch of commentary coming out of the central bank may prop up the Canadian dollar should Governor Mark Carney continue to strike an improved outlook for the region. As the recovery gathers pace, we may see the central bank head continue to soften his dovish tone for monetary policy, but concerns surrounding the record-rise in household debt may lead Mr. Carney to preserve a balanced tone for the economy as the marked appreciation in the local currency continues to dampen the fundamental outlook for the region.

The jump in business sentiment paired with the stickiness in price growth may encourage the BoC to raise its fundamental assessment for the region, and a less dovish policy statement may lead the EURCAD to retrace the decline from earlier this month as it raises the scope for a rate hike. However, the slowdown in private sector consumption along with weakening trade conditions may push the central bank to retain a wait-and-see approach throughout 2012, and we may see the BoC keep rates on hold for a prolonged period of time as policy makers continue to see potential headwinds for the economy. In turn, we may see the short-term rebound in the EURCAD gather pace over the next 24-hours of trading, and the pair finally break and close above the 100-Day SMA (1.3215) should Governor Carney curb speculation for higher borrowing costs.

A look at the encompassing structure sees the EURCAD reversing sharply after briefly breaking below the 23.6% Fibonacci extension taken from the September 19th and January 17th troughs at 1.3050. As noted in last week’s EURCAD Scalp Report, the pair continues to trade within the confines of a wedge formation dating back to the start of the year with initial daily resistance seen at the 50-day moving average at 1.3150 backed closely by the 38.2% extension at 1.3165. Our medium-term outlook on the pair remains weighted to the topside with only a break below trendline support dating back to the January low negating our directional bias. 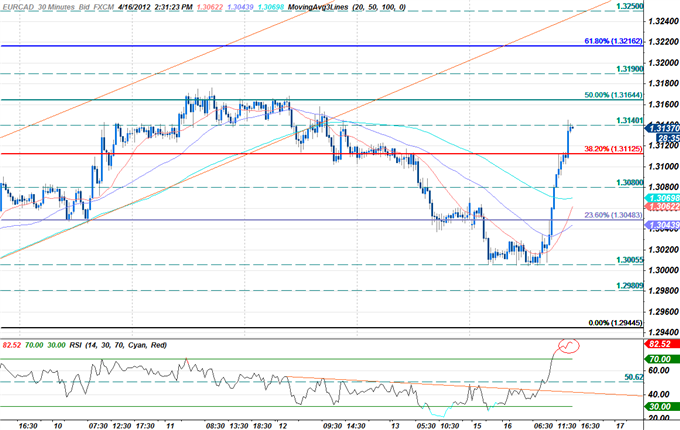 Our 30min scalp chart shows the pair surging in North American trade before encountering resistance at 1.3140. It seems as though the correction off the channel break seen last week may be complete with a breach above last week’s highs just above the 50% extension taken from the March 14th and April 5th troughs at 1.3165 eying subsequent topside targets at 1.3190, the 61.8% extension at 1.3216, and 1.3250. Interim support now rests with the 38.2% extension at 1.3113 backed by 1.3080 and the 23.6% extension at 1.3050. Should the data prompt a bullish loonie response, look to target downside levels with a break below the monthly low at 1.2945 putting a bearish tone on the pair.

Beyond the rate decision, we will be keeping a close eye on the policy statement as it promises to spur volatility in the exchange rate, and we may see the Canadian dollar snap back against the Euro should the BoC continue to strike an improved outlook for the region. Therefore, if we see the central bank soften its dovish tone for monetary policy, we will need a red, five-minute candle following the release to establish a sell entry on two-lots of EURCAD. Once these conditions are met, we will set the initial stop at the nearby swing high or a reasonable distance from the entry, and this risk will generate our first objective. The second target will be based on discretion, and we will move the stop on the second lot to breakeven once the first trade reaches its mark in an effort to lock-in our profits.

In contrast, the ongoing slack in the real economy paired with the slowdown in global trade may encourage the BoC to retain a wait-and-see approach throughout 2012, and we may see Governor Carney talk down speculation for higher borrowing costs as the region in an effort to stimulate a stronger recovery. As a result, if the central bank head maintains a cautious tone, we will carry out the same strategy for a long euro-loonie trade as the short position mentioned above, just in reverse.

Although the Bank of Canada kept the benchmark interest rate at 1.00%, central bank Governor Mark Carney held an improved outlook for the region, stating that the ‘recent developments suggest that the outlook for the Canadian economy is marginally improved.’ As the BoC softened its dovish tone for monetary policy, the EURCAD quickly slipped back below 1.3150, and the Canadian dollar held its ground throughout the North American trade as the pair ended the day at 1.3140.