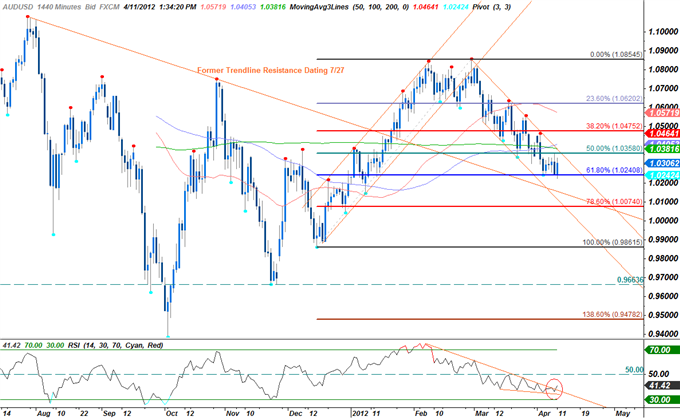 Employment in Australia is expected to increase 6.5K after contraction 15.4K in February and the rebound in job growth may spark a bullish reaction in the AUDUSD as the development reinforces an improved outlook for the $1T economy. As private sector activity gradually gathers pace, we may see the Reserve Bank of Australia preserve a wait-and-see approach throughout 2012, but the central bank may keep the door open to ease policy further as the slowdown in global trade dampens the prospects for an export-led recovery. According to Credit Suisse overnight index swaps, market participants see a 93% chance for a rate cut at the May 1st meeting, and we may see the downward trending channel in the AUDUSD continue to take shape as interest rate expectations falter.

The rise in business confidence paired with the expansion in private sector consumption certainly bodes well for the labor market, and a marked rise in employment may push the AUDUSD back towards the 200-Day SMA at 1.0390 as the development dampens speculation for a rate cut. However, the slowdown in global trade along with the ongoing slack within the real economy may continue to drag on the labor market, and a dismal employment report may heighten speculation for a rate cut as the RBA maintains a dovish tone for monetary policy. In turn, a weaker-than-expected print would reinforce our bearish call for the AUDUSD, and we should see the pair move back towards the 38.2% Fibonacci retracement from the 2010 low to the 2011 high around 0.9930-50 as it carves out a major top in 2012.

A look at the encompassing structure sees the aussie continuing to trade within the confines of a descending channel formation dating back to the February 29th high with the pair rebounding off key daily support at the 61.8% Fibonacci retracement taken from the December 15th advance at 1.0240. This level remains paramount for the aussie with a break below offering further conviction on our directional bias. Topside resistance stands at the confluence of the 50% retracement and channel resistance at 1.0360 backed by the 200-day moving average at 1.0380 and the 100-day moving average at the 1.04-figure. Note that an RSI breach of trendline resistance does suggest that the pair may see a larger correction before heading lower. 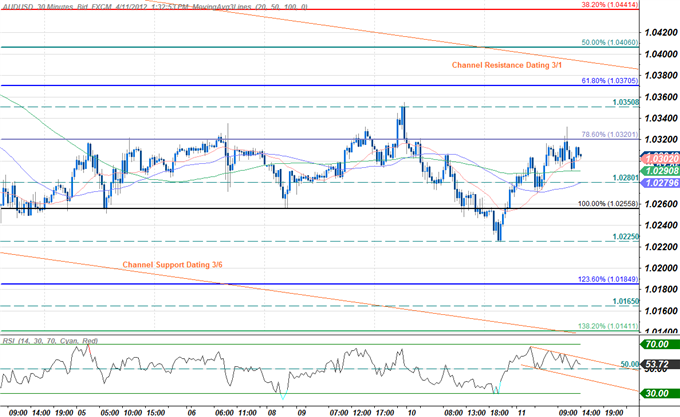 Our 30min scalp chart shows the aussie trading within the confines of a short-term descending channel formation with the pair currently trading just below interim resistance at the 78.6% Fibonacci extension taken form the March 19th and 27th crests at 1.0320. A breach here eyes subsequent ceilings at 1.0350, the 61.8% extension at 1.0370 and the 1.04-figure. Interim support rests at 1.0280 backed by the 100% extension at 1.0255 and 1.0225. A break below this level risks substantial losses for the aussie with such a scenario eying extended targets at the 123.6% extension at 1.0185 and 1.0165. Should the print prompt a bullish response, look to target topside levels with a breach above channel resistance negating our interim bias.

Forecasts for a rebound in employment casts a bullish outlook for the high-yielding currency, and a positive development could set the stage for a long Australian dollar trade as the data raises the prospects for a more robust recovery. Therefore, if the $1T economy adds 6.5K jobs or more in March, we will need a green, five-minute candle following the release to establish a buy entry on two-lots of AUDUSD. Once these conditions are met, we will set the initial stop at the nearby swing low or a reasonable distance from the entry, and this risk will generate our first target. The second objective will be based on discretion, and we will move the stop on the second lot to breakeven once the first trade hits its mark in order to preserve our gains.

However, the ongoing weakness in the private sector paired with the slowdown in global trade may drag on hiring, and a dismal employment report could spark a sharp selloff in the exchange rate as it raises the scope for a rate cut. As a result, if the data falls short of market expectations, we will implement the same strategy for a short aussie-dollar trade as the long position laid out above, just in the opposite direction. Australia’s labor market unexpectedly weakened in February, with the $1T economy shedding 15.4K jobs, while the jobless rate advanced to 5.2% from 5.1% in the previous month. Indeed, the dismal labor report pushed the AUDUSD towards 1.0520, but the Australian dollar regained its footing throughout the day to end the trading session at 1.0640.