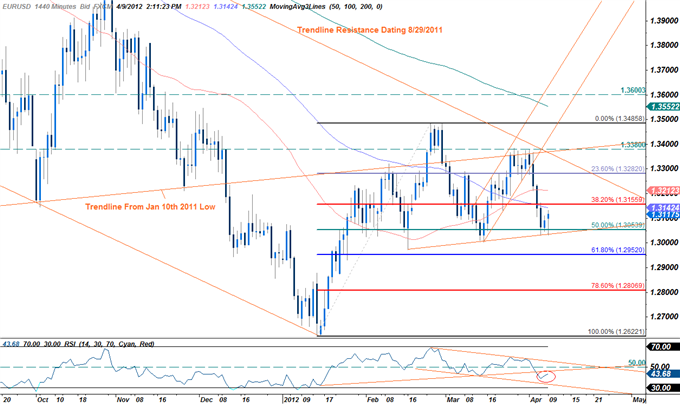 Investor confidence in the euro-area is expected to fall back from an eight-month high in April, and the weakening outlook for the region may spark a selloff in the EURUSD as the data heightens speculation for additional monetary support. As the region continues to face a risk for a prolonged recession, we are likely to see the European Central Bank continue to carry out its easing cycle this year, and President Mario Draghi may look to target the benchmark interest rate as the Long Term Refinancing Operations appear to be having a limited impact on the real economy.

As the European Central Bank sticks to the sidelines, the recent batch of positive developments has dampened expectations for additional monetary support, and an upbeat Sentix survey could push the EURUSD back towards the top of its current range (1.3400) as it raises the fundamental outlook for the region. However, as the sovereign debt crisis continues to drag on the real economy, the risk for a prolonged recession may drag on investor confidence, and we may see the ECB keep the door open to expand policy further in an effort to balance the risks surrounding the euro-area. In turn, we may see the EURUSD threaten the range-bound price action carried over from earlier this year, and a break below support (1.3000) would ultimately expose the 23.6% Fibonacci retracement from the 2009 high to the 2010 low around 1.2630-50.

A look at the encompassing structure sees the euro trading within the confines of a broad descending channel formation dating back to the August highs with the exchange resting above key daily support targets seen at the 50% Fibonacci retracement taken from the January 16th advance at 1.3055 and trendline support dating back to the February lows, currently at 1.3035. Topside advances will encounter resistance at the 100-day moving average at 1.3140 and is backed closely by the 38.2% retracement at 1.3155. A breach here negates our bearish bias with such a scenario likely to see a test of the convergence of channel resistance and the 23.6% retracement at 1.3280. 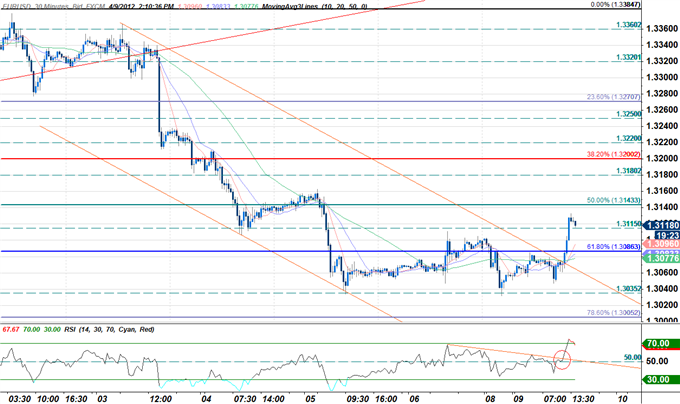 Our 30min scalp chart offers an update to the comprehensive EURUSD Scalp Report published last week with the single currency breaching above short-term channel resistance dating back to the April 3rd high in early US trade. The pair is likely to remain well supported in the interim as weaker-than-expected employment data out of the world’s largest economy fuels calls for more easing from the Fed. While we do not believe the print will prompt another round of easing, speculation that the Fed may remain steadfast in its commitment to keep rate anchored through late 2014 may temporarily limit dollar advances. That said, we look for fresh euro short scalps with topside resistance targets seen at the 50% Fibonacci extension taken from the February 24th and March 27th crests at 1.3140 and the key daily resistance cited earlier at 1.3155. A break back below the 61.8% extension at 1.3085 puts us back on the short side with subsequent targets seen at 1.3035, the 78.6% extension at 1.3005 and 1.2980. Should the print prompt a bearish response look to target downside levels with a break below 1.2950 risking substantial losses for the single currency.

Trading the given event risk casts a bearish outlook for the single currency as market participants anticipate to see the Sentix survey fall back from an eight-month high, but a positive development may pave the way for a long Euro trade as it dampens expectations for more easing. Therefore, if the index advances from the previous month, we will need to see a green, five-minute candle following the release to generate a buy entry on two-lots of EURUSD. Once these conditions are met, we will set the initial stop at the nearby swing low or a reasonable distance from the entry, and this risk will establish our first target. The second objective will be based on discretion, and we will move the stop on the second lot to cost once the first trade reaches its mark in an effort to lock-in our profits.

In contrast, the ongoing slack within the real economy paired with the threat for contagion may continue to drag on investor sentiment, and a dismal Sentix report could spark a sharp selloff in the exchange rate as it raises the risk for a prolonged recession. As a result, if we see the index fall back to -9.1 or lower in April, we will carry out the same strategy for a short euro-dollar trade as the long position mentioned above, just in reverse. 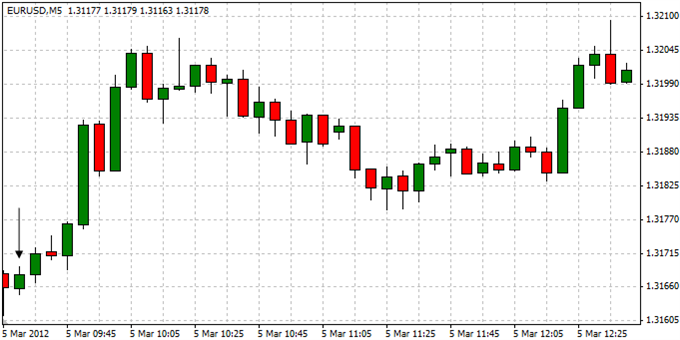 Although the Sentix investor confidence survey fell short of market expectations, the index advanced to an eight-month high of -8.2, with the gauge for future expectations climbing to -2.3 from -6.3 in the previous month. Indeed, the third consecutive rise in the index pushed the EURUSD back above 1.3200, and the exchange rate continued to track higher during the North American session to end the day at 1.3215.