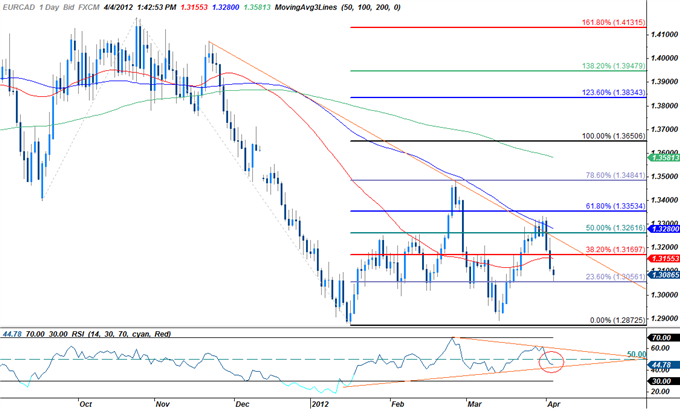 Canada’s job report is expected to show a 10.5K rise in employment and a rebound in payrolls may instill a bullish outlook for the Canadian dollar as it raises the outlook for growth. As Bank of Canada Governor Mark Carney holds an improved outlook for the region and sees a ‘more firm’ recovery, a positive development could renew speculation for higher borrowing costs, and the central bank may show an increased willingness to normalize monetary policy further in 2012 as the economy gets on a more sustainable path.

Easing input prices paired with the uptick in business spending encourage an improved outlook for the Canadian labor market, and a marked expansion in employment may push the EURCAD back towards 1.3000 as market participants increase bets for a rate hike. However, the ongoing slack within the real economy paired with the slowdown in private sector consumption may push firms to scale back on hiring, and a dismal jobs report may encourage the BoC to maintain its current policy for a prolonged period of time as it aims to encourage a sustainable recovery. In turn, we may see the EURCAD retrace the decline from earlier this year, and the pair may ultimately make another run at 1.3400 as market participants scale back speculation for higher borrowing costs.

A look at the encompassing structure of the EURCAD sees the pair reversing sharply on the first of the month after a brief break above trendline resistance dating back to the November 22nd high. The magnitude of the pullback sets a bearish tone with the pair breaking back below the 38.2% Fibonacci extension taken form the September 19th and January 17th troughs at 1.3170 before encountering support at the 23.6% extension at 1.0356. Note that RSI continues to consolidates within the confines of a wedge formation with a break below trendline support offering further conviction on our directional bias. 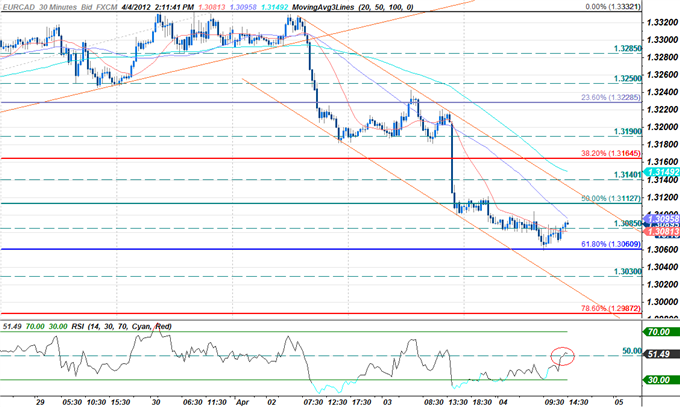 Our 30min scalp chart sees the EURCAD holding within the confines of a short-term descending channel formation with the pair rebounding off the 61.8% Fibonacci retracement taken from the March 14th advance at 1.3060 before finding solace around the 1.3085 soft resistance level. A likely break here eyes interim resistance the 50% retracement at 1.3115, 1.3140, and 1.3165. We reserve this level as our topside limit which if breached negates our bias. A break below interim support eyes subsequent downside targets at 1.3030, the 78.6% retracement at 1.2990, and 1.2960. Should the print prompt a bullish loonie response (bearish EURCAD), look to target downside levels.

Projections for a 10.5K rise in employment encourage a bullish outlook for the loonie, and a positive development could pave the way for a long Canadian dollar trade as the data raises the scope for a rate hike. Therefore, if the print comes in-line or above forecast, we will look for a red, five-minute candle subsequent to the release to generate a sell entry on two-lots of EURCAD. Once these conditions are met, we will set the initial stop at the nearby swing high or a reasonable distance from the entry, and this risk will establish our first objective. The second target will be based on discretion and we will move the stop on the second lot to cost once the first trade hits its mark in order to lock-in our winnings.

On the other hand, the slowdown in private sector consumption paired with the ongoing weakness within the real economy may continue to drag on the labor market, and a dismal report could spark a selloff in the local currency as it dampens expectations for higher interest rates. As a result, if the release falls short of market expectations, we will implement the same strategy for a long euro-loonie position as the long trade mentioned above, just in reverse. 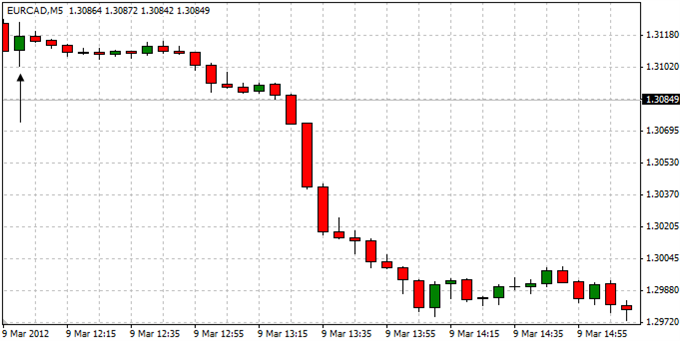 The Canadian economy lost 2.8K jobs in February following the 2.3K expansion in the previous month, while the jobless rate unexpectedly slipped to 7.4% from 7.6% during the same period as discouraged workers left the labor force. Despite the negative print, market participants turned a blind eye to the data as U.S. Non-Farm Payrolls took center stage, while the EURCAD tracked lower throughout the North American trade to end the day at 1.2992.