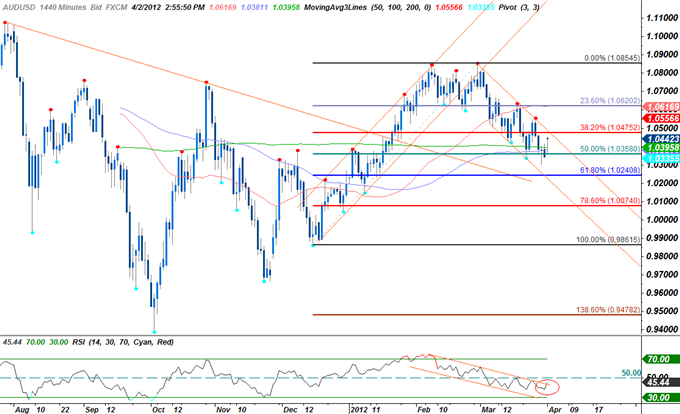 Although market participants see the Reserve Bank of Australia keeping the benchmark interest rate at 4.25%, the policy statement accompanying the rate decision could drag on the exchange rate should the central bank talk up speculation for lower borrowing costs. According to Credit Suisse overnight index swaps, investors are pricing a 47% chance for a 25bp rate cut in April, and we may see interest rate expectations deteriorate further in 2012 as the fundamental outlook for the region deteriorates.

The uptick in inflation expectations paired with the expansion in consumer credit may encourage the RBA to soften its dovish tone for monetary policy, and the statement may push the AUDUSD back towards former support around 1.0600 as market participants curb bets for a rate cut. However, as the slowdown in global trade along with the ongoing slack within the real economy dampens the outlook for growth, Governor Glenn Stevens may show a greater willingness to ease policy further, and we may see the central bank lay the groundwork for lower borrowing costs in an effort to balance the risks surrounding the region. In turn, the rebound in the AUDUSD may be short-lived, and exchange rate may continue to give back the advance from earlier this year as it maintains the downward trending channel carried over from the previous month.

A look at the encompassing structure shows the AUDUSD holding within the confines of a descending channel formation dating back to the February highs with price action eyeing topside resistance at the confluence of the 38.2% Fibonacci retracement and channel resistance at 1.0475. This level remains paramount for the aussie with a breach above eyeing daily targets at the convergence of the 50-day moving average and the 23.6% retracement at 1.0620. Interim support rests with the 50% retracement at 1.0360. 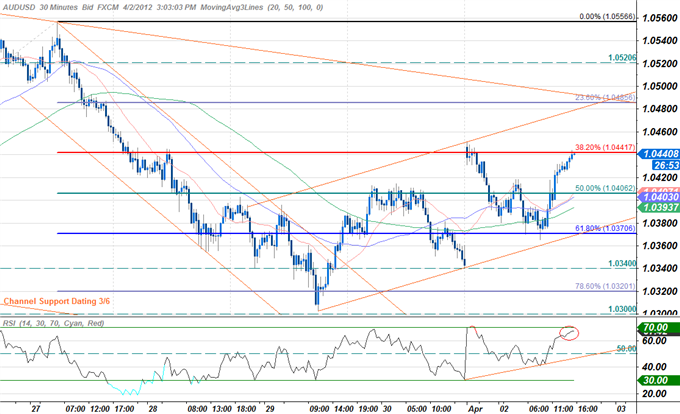 Our 30min scalp chart shows the pair trading within a newly formed ascending channel formation with the exchange rate testing interim resistance at the 38.2% Fibonacci extension taken from the March 19th and 27th crests at 1.0440. Critical intra-day resistance rests at the 3-way convergence at the 23.6% extension at 1.0485 with a breach above this level eyeing subsequent topside targets at 1.0520 and last week’s high at 1.0555. Interim support rests at 1.0405 backed by the confluence of the 61.8% extension and channel support at 1.0370. A break below this level risks substantial aussie losses with subsequent targets seen at 1.0340, the 78.6% extension at 1.0320 and the 1.03-figure. Should the print prompt a bearish response look to target downside levels with a break below 1.0370 offering further conviction on our directional bias.

As the RBA is widely expect to keep the benchmark interest rate on hold, trading the given event risk may not be as clear cut as some of our previous trades, but a less dovish statement from the RBA could set the stage for a long Australian dollar trade as market participants scale back bets for a rate cut. Therefore, if Governor Stevens raises his outlook for the $1T economy, we will need a green, five-minute candle following the release to generate a buy entry on two-lots of AUDUSD. Once these conditions are met, we will set the initial stop at the nearby swing low or a reasonable distance from the entry, and this risk will establish our first objective. The second target will be based on discretion, and we will move the stop on the second lot to cost once the first trade reaches its mark in order to lock-in our profits.

In contrast, the ongoing weakness in the real economy paired with the slowdown in global trade may warrant additional monetary support, and the central bank may carry out its easing cycle throughout 2012 as growth prospects deteriorate. As a result, if the RBA continues to strike a dovish tone for future policy, we will implement the same strategy for a short aussie-dollar trade as the long position laid out above, just in the opposite direction. 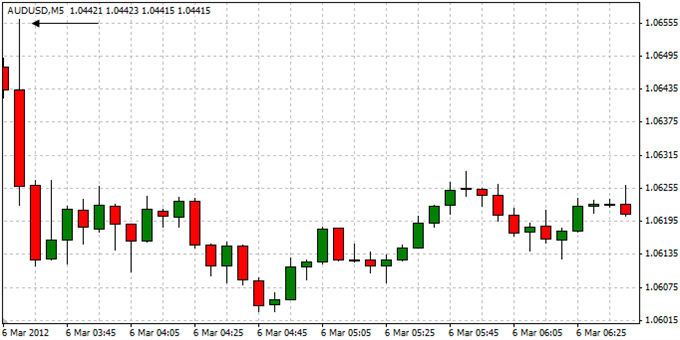 Although the Reserve Bank of Australia kept the benchmark interest rate at 4.25%, the central bank left the door open for lower borrowing costs as ‘the inflation outlook would provide scope for easier monetary policy.’ The dovish tone held by the RBA sparked a sharp selloff in the AUDUSD, with the exchange rate falling back towards 1.0600, and the high-yielding currency continued to lose ground during the North American trade, with the exchange rate settling at 1.0550 at the end of the day.