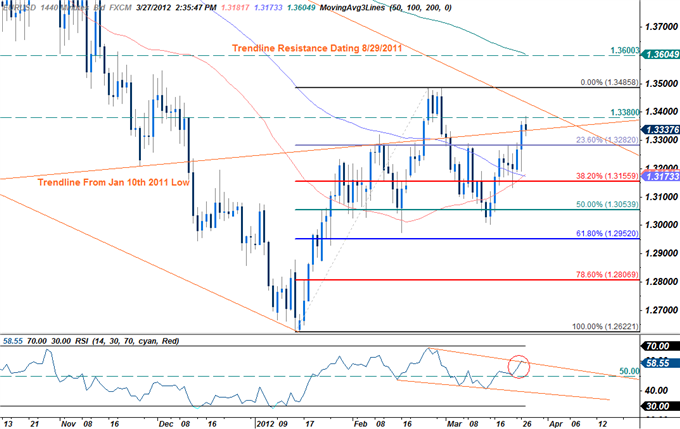 Mortgage approvals in the U.K. are expected to increase an annualized 57.2K following the 58.7K expansion in January, and the slowdown in private sector lending may drag on the British Pound as it dampens the outlook for growth. As the fundamental outlook remains clouded with high uncertainty, we may see the Bank of England show an increased willingness to expand monetary policy further, but it seems as though the MPC will endorse a wait-and-see approach throughout 2012 as central bank officials anticipate to see a more robust recovery this year.

As the economic recovery in the U.K. gradually gathers pace, rising property prices may encourage increased demands for home loans, and a positive development could spur another run at 1.6000 as it dampens expectations for additional asset purchases. However, subdued wage growth paired with the recent weakness in household confidence may drag on private sector lending, and the central bank may keep the door open to implement more quantitative easing in an effort to encourage a stronger recovery. In turn, we may see the GBPUSD trend lower over the remainder of the week, and the exchange rate may ultimately work its way back towards 1.5600 to test the range carried over from the previous month.

A look at the encompassing structure shows the sterling attempting to break back below former trendline resistance dating back to August 19th before rebounding sharply off the confluence of the 200-day moving average and the key 61.8% Fibonacci retracement taken from the February 29th decline at 1.05840. This level remains paramount for the sterling with a break below eyeing daily targets at the 50% extension at 1.5795. Critical topside resistance remains at the 2012-highs at the 1.60-figure. 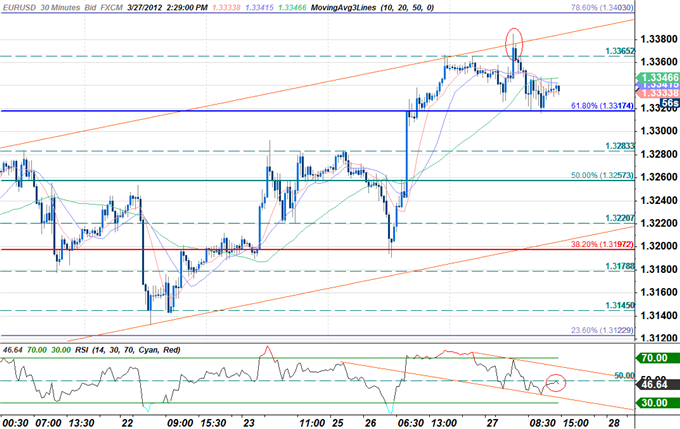 Our 30min scalp chart sees the GBPUSD continuing to trade within the confines of an ascending Andrew’s pitchfork channel dating back to the March 21st with the exchange rate hovering just below the 1.59 soft resistance target at the close of New York trade. A breach above this level eyes topside targets at 1.5920, the 100% Fibonacci extension taken from the February 22nd and March 12th troughs at 1.5945, 1.5970, and the 1.60-figure. Note that a move above the bisecting channel line offers further conviction on our directional bias with such a scenario eyeing subsequent topside targets. Interim support rests at 1.5850 with a break below channel support negating our interim bias. Should the print prompt a bearish sterling reaction look for the break to confirm entry with subsequent floors seen at the 61.8% extension at 1.5815, and the 50% extension at 1.5770.

Projections for a slowdown in private sector lending casts a bearish outlook for the sterling, but an above-forecast print could pave the way for a long British Pound trade as it dampens the scope for more easing. Therefore, if mortgage approvals top 57.2K or unexpectedly expands from the previous month, we will need a green, five-minute candle following the release to establish a buy entry on two-lots of GBPUSD. Once these conditions are met, we will set the initial stop at the nearby swing low or a reasonable distance from the entry, and this risk will generate our first objective. The second target will be based on discretion, and we will move the stop on the second lot to cost once the first trade reaches its mark in order to preserve our winnings.

On the other hand, subdued wage growth paired with the ongoing slack in the labor market may weigh on lending activity, and a dismal print could spark a selloff in the sterling as it dampens the prospects for future growth. As a result, if the report falls short of market expectations, we will carry out the same strategy for a short pound-dollar trade as the long position laid out above, just in reserve.

Impact that U.K. Mortgage Approvals has had on GBP during the last month 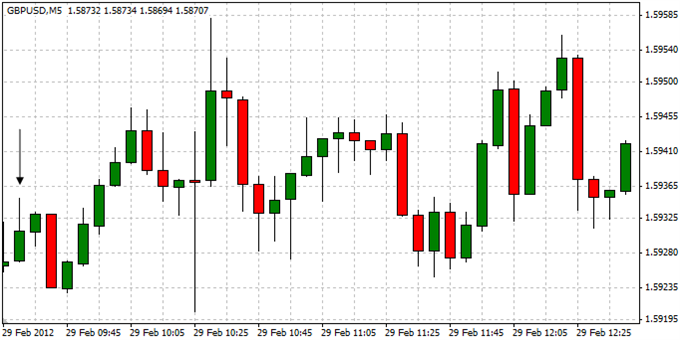 U.K. mortgage approvals increased an annualized 58.7K in January to mark the largest advance since June 2009, and the development may encourage the Bank of England to soften its dovish tone for monetary policy as the economic recovery gradually gathers pace. The British Pound pushed higher following the better-than-expected print, with the GBPUSD climbing back above 1.5950, but the sterling struggled to hold its ground during the North American trade as the pair ended the day at 1.5900.